Brazilience: What We Learned on the 2016 Brazil GIX 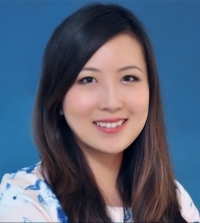 Sherry grew up in China and lived in Finland for a few years before she came to the U.S. She graduated from Boston University Questrom School of Business in 2011 with a major in Business Administration and Management. Before Tuck, she worked for Boston Scientific as a project manager.

During spring break, I traveled to Brazil with 20 fellow Tuckies on a trip led by Professor Leslie Robinson, an associate professor who teaches financial accounting in the MBA program. This trip was one of the Global Insight Expeditions (GIX) trips offered at Tuck that earns you course credit and counts toward the global requirement as part of the Tuck curriculum.

The course was focused on “Brazilience”—building resilience amid economic stress and change in Brazil. We had an opportunity to visit various leading Brazilian companies such as Engie, Radar SA, Embraer, Kroton Educational, and Iochpe-Maxion. These visits have further advanced my understanding of the business environments in different industries, and the policies and structures that the Brazilian government put in place to build a resilient economy.

Fabio Giambiagi, a famous Brazilian economist, delivered a speech on the overview of the Brazilian economy. From his speech, I learned that the success of the economic reform and the start of the social reform so far has been attributed to Brazil’s decision to cut government spending, float the exchange rate, and raise interest rates to control inflation. However, these policies, along with the current political chaos, have led to an economic contraction with a negative GDP in Brazil. During the time we were in Rio and Sao Paulo, we witnessed the biggest demonstration against the Brazilian government in the history. Given the current political uncertainty in Brazil, I am interested to keep an eye on how the government’s policies will shape the Brazilian economy in the long term.

Apart from company visits and presentations on Brazil’s macroeconomics, I was constantly amazed by the astonishing scenery and fun that the Brazilian culture has to offer. We visited Christ the Redeemer, watched the most beautiful sunset over the Copacabana beach in Rio, learned to Samba dance for the first time in a local club, had a Tuck ladies’ night enjoying the night view of Sao Paulo on the rooftop sky bar, and, of course, tried various exotic food and Caipirinha. The GIX experience was such an eye-opening experience for me. It allowed me to gain a deep understanding of Brazil’s political landscape and business environments. And most importantly, it was an amazing spring trip to bond with Tuckies. 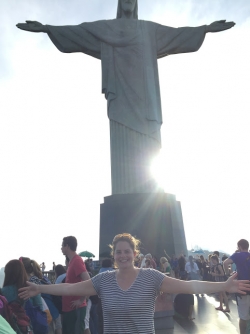 Emily grew up in Greenwich, Conn. She graduated from Dartmouth College in 2012 majoring in psychology and geography. She spent the last three years working at Parthenon-EY in Boston, Mass., specializing in health care and private equity management consulting.

I had an unbelievable time traveling to Brazil on the Tuck GIX with 20 of my classmates and Professor Leslie Robinson. We couldn’t have asked for a better time to go to enhance our learning of the country because: 1. Brazil is in its largest economic downturn since the 1930s; 2. It’s in the process of impeaching its president, which led to millions of people taking to the streets in protest; and 3. Brazil is hosting the Olympics in Rio this coming summer.

It is my belief that you can really understand the true business environment when a country is in a downturn, and that is what our trip theme Brazilience was all about: How is Brazil showing resilience as a country, community, and a collection of businesses through this economic and political turmoil?

We had the opportunity to visit a wide variety of companies both in both Rio de Janeiro and Sao Paulo. We visited an aircraft manufacturer, a foundation providing assistance to kids in a very poor neighborhood, a city operations center, the American consulate, a government agency bringing in foreign investment, a startup incubator, and more. My favorite visits were to the Brazilian arm of Engie, an energy company that distributes power to 6 percent of Brazil, and Iochpe-Maxion, the largest wheel manufacturer in the world, because we got extensive time with both CEOs (Iochpe-Maxion’s CEO is a Tuck alum and Engie’s CEO is the father of a current Tuck student). During both visits, we learned all about their company’s strategy, applied our knowledge from our Tuck core classes to their company (accounting, corporate finance, GEM, etc.), and really learned what it is like to run a company in an economic recession and complete political turmoil.

One of my takeaways from the trip is that Brazil is a beautiful country, with a rich culture (we experienced it Samba dancing one night!) that will make it through the mess it is in now. It will be able to broadcast the beauty of its beaches, tropical rainforests, and mountains in Rio this summer with the Olympics. It was a once-in-a-lifetime opportunity to be in Brazil when millions of people took to the streets in protest. Even though I had no idea what everyone was shouting in Portuguese, I could tell that the Brazilian people were ready for change. All the executives at the companies we visited felt the same way. Our Tuck GIX gave us such an insider view into the richness and complexity of Brazil. I will certainly be paying attention to the news as Brazil digs itself out of this mess!

Thank you to the TuckGO office and Professor Robinson for putting together such an incredible trip!