Alejandro Lorenzo-Rojas was born in Havana, Cuba and grew up in Central Florida. Before Tuck he was an Economics major working as a Fixed Income Product Specialist in New York.


"Last Thursday, I escaped the hustle and bustle that is New York for a weekend retreat that Tuck affectionately calls Admitted Students Weekend. My trip began in Summit, New Jersey where another admit picked me up in her car. After a wonderful scenic drive through farm lands and quaint New England towns we arrived in Hanover. Immediately we were welcomed by my student host at Murphy’s. He set the tone for the weekend with a celebratory toast to some 20 plus admits. 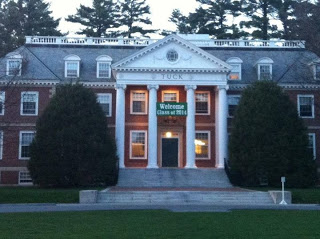 As the night progressed a number of T’12s and T’13s arrived, and welcomed all of the admits with open arms - setting a precedence for the entire weekend. I quickly learned that there is a shared trust and genuine camaraderie among Tuckies. Coming from a big city, I found the setting refreshing yet unfamiliar. In the dorms, students placed personal belongings in the hallways and left their doors unlocked. Everyone seemed to open their home to me. One T’13 and his wife hosted a few admits and me for dinner at their apartment. Through these interactions it became clear that Tuckies sincerely value family.
Throughout the weekend, I was impressed by the caliber and diversity of my peers and current students. However, these two factors alone are not unique among top business schools - even though current Tuck students include a two-time Olympian, Grammy Award nominee, and Gold Cup Fencer. What I noticed distinguished Tuck from other top ranked programs is a student class that consistently demonstrates commitment and loyalty to one another. When you become a Tuckie you join the family. With that, you gain unprecedented support from the Tuck community. From the onset, students were eager to put me in touch with other Tuckies who have similar career interests.
Equally as important, I found Tuckies to be very relatable transcending cultural, ethnic, and professional differences. Whether we were enjoying beer at Tuck Tails or dancing to T’12s cover of “The Devil Went Down to Georgia,” everyone seemed to know how to relax and have a good time. Admitted Students Weekend was such a success that it left me with a bittersweet feeling on Sunday as I drove away. I would have to wait a few more months till I jump in.  I did leave, however, with a profound conviction that “I am Tuck,” and belief that the next two years will be transformative for me professionally and personally."