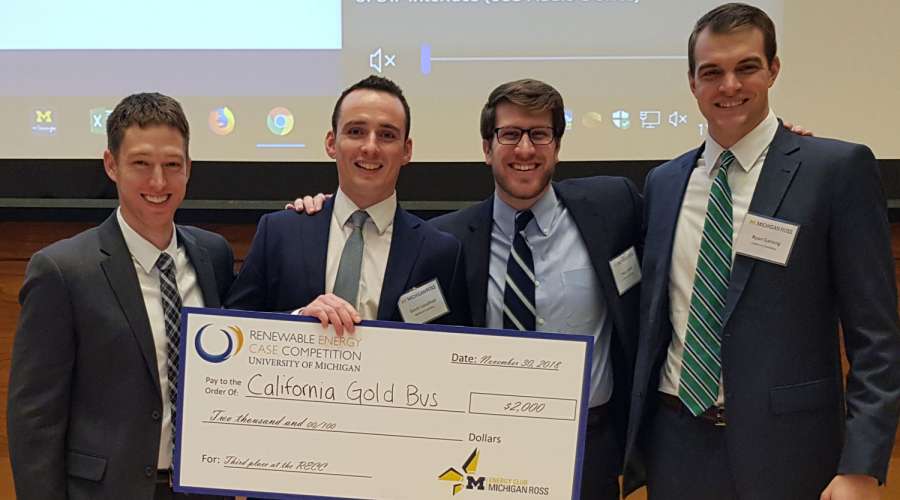 In late November 2018, a team of students, with sponsorship from the Revers Center for Energy, traveled to the equally cold and snowy Ann Arbor, MI to compete in the Ross Renewable Case Competition. The team, consisting of Pete Cahill, Greg Koch, Gavin Loudfoot, Kevin Yuan, and myself were selected from a large group of first-year students interested in representing Tuck at an energy case competition. With a former energy consultant, two former engineers, and two people with energy finance experience, the team had a solid background in energy. This, along with the large number of applicants to the case competition teams, demonstrates the continued interest in the energy space at Tuck.

The Ross competition is unique in that it is focused solely on renewable energy. This year’s case focused on the California energy market as the state recently passed ambitious legislature mandating that 100 percent of its electricity come from clean energy sources by 2045. Teams were tasked with identifying a company active in the California energy market that will help the state achieve its renewable energy goals, and then analyze potential returns on an investment in the company. The team received the prompt in the last week of October—while already busy with midterms and an energy-trek to Boston—and set to work researching companies, ultimately deciding on Proterra, an electric-bus manufacturer. Electric Bus adoption is set to increase exponentially over the next decade, and Proterra is well positioned to capture that growth with a 50 percent market share in the North American e-bus market. Furthermore, Proterra provides a unique “vehicle-to-grid” opportunity for California to balance its renewable supply and demand, which our team identified as a key issue in the case. After a week of hard work, we sent off our presentations and hoped for the best.

The Tuck team, now dubbed the “California Gold Bus,” was one of 16 teams selected out of 32 applicants from top tier business schools internationally to travel to Ross for the second round. Friday morning started early, and soon it was time for our 15 minute presentation to a panel of four judges, with five minutes of Q&A. The judges were professionals from across the energy space, including Marathon Capital, EDF Renewables, Deloitte Consulting, and the Ross Energy Institute. A nice component of the Ross competition is that it builds in time to receive feedback from the judges. Overall, they were impressed with our presentation, but had multiple areas of improvement. We left the room proud of our work, but felt the judges had brought up too many areas of improvement to advance us to the next round.

You can imagine our surprise when we were announced at the end of lunch as one of four finalists! We were given an hour to quickly incorporate the judges’ feedback into our longer second presentation, and then we were whisked into a large auditorium for the final presentations. Because we presented last, we were able to watch the other teams and were thoroughly impressed. Finally, it was our turn. We presented strongly, and defended our thesis well during 10 minutes of Q&A. The judges took longer than scheduled to deliberate—as it turns out, each judge supported a different team to be the winner. Ultimately, the “California Gold Bus” was awarded third place and a $2,000 check. We ended the day not only happy with our achievement but also honored to represent Tuck and the Revers Center on the final stage. (Although the highlight of the trip may have been carrying a giant check around Ann Arbor and back home!) 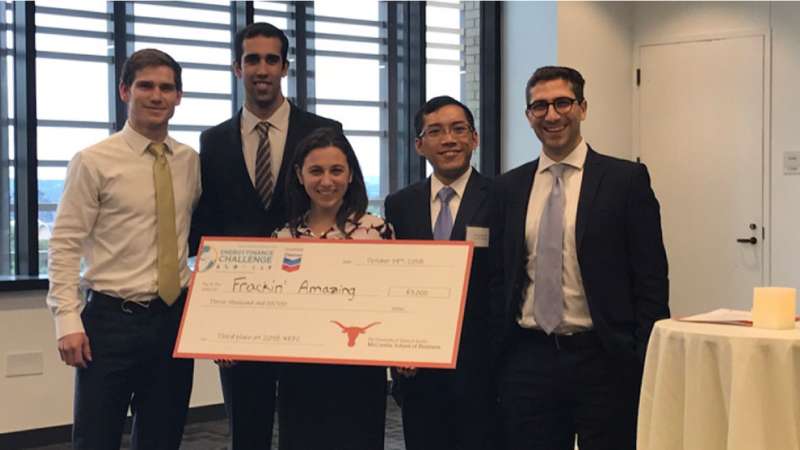 What do a French coal trader, a Canadian civil engineer, a Singaporean oil trader, an... 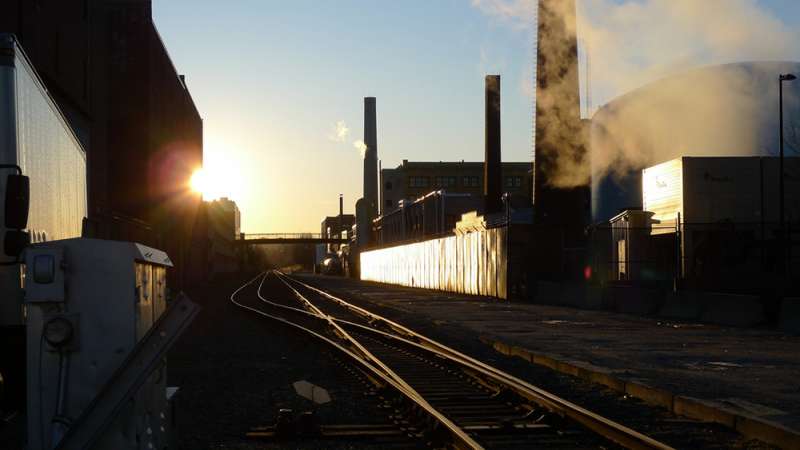 An Experiential Trek to the MIT Nuclear Reactor Laboratory

A team of Tuck students were invited to tour the MIT Nuclear Reactor Laboratory (NRL)...