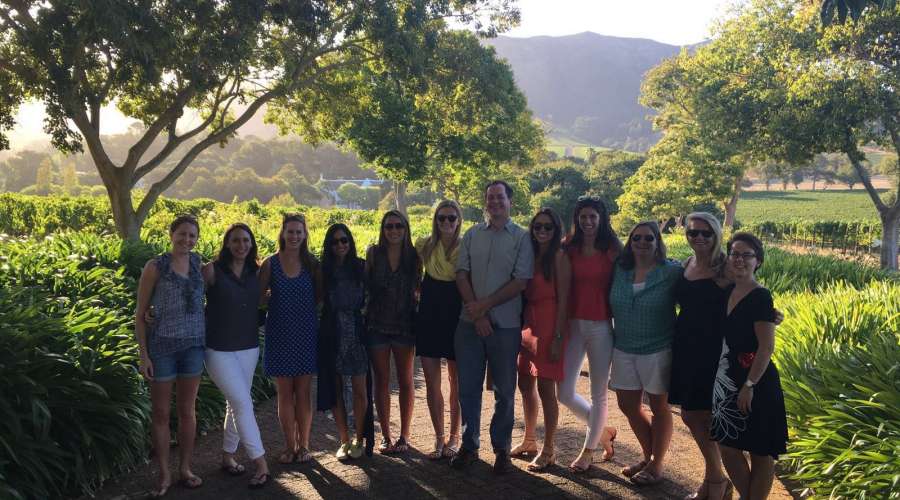 What We Learned: The 2016 South Africa GIX

During the South Africa GIX, which was led by Professor Phil Stocken, we visited Johannesburg and Cape Town, spending time at the Pilanesberg National Park during the intervening weekend. At the park, we met with the Chief Ecology Officer of Pilanesberg Steve Dell and his wife Perry. We learned about the grave dangers of poaching faced by the South African rhinos, which are on the verge of extinction. Steve and Perry are at the forefront of the conservation efforts and are doing a fantastic job. We became aware of the gravity of the situation and, in true Tuck fashion, started a drive to collect donations and made a contribution for their nonprofit. That night, we attended a traditional African

Braai (barbecue) at a spectacular location within Pilanesberg laden with lanterns and we were joined by local dancers and singers. It was a magical experience under the stars!

We spent our final days in South Africa with an adventure-filled week in Cape Town surrounded by beautiful beaches, cliffs, wildlife and sun.  We visited a broad range of impressive companies including:

One of the most rewarding company visits in Cape Town was an afternoon spent at Grassroots Soccer in the town of Khayelitsha. Grassroots Soccer is an adolescent health organization that educates youth about HIV/AIDs and gender-based violence through the sport of soccer. The Tuck group was able to tour their facility, play in a round-robin tournament with the Grassroots volunteers, and interact with a group of local children.

Many themes emerged throughout our company visits including the stunning income inequality that exists across South Africa. While Pick n Pay expects sales growth with the rise of the South African middle class, companies like Grassroots Soccer and MonkeyBiz focus their efforts on improving the lives of the lower class.

We ended the GIX with a traditional Braii at Professor Stocken’s family’s home. A trip of a lifetime with an amazing group!

Read previous posts on the 2016 GIXs: India, Cuba, and Brazil.

Lane McVey T’17 is from Bronxville, NY.  She graduated from Colby College with a major in Government and Classical Civilization and played on the Women’s Lacrosse team. Before Tuck, she worked at Major League Baseball in sponsorship and will intern at MillerCoors this summer. Lane spends most of her time working for theBOX Food Truck and playing Tripod hockey.

Vishnu Malli T'17 is living the dream as a first-year student at Tuck. He loves being surrounded by intellectually stimulating peers and is passionate about creative ideas. He thinks that he suffers from the “get out of your comfort zone” syndrome. He grew up in Mangalore, India and was perfectly happy living there, but decided to move to Bangalore. When life couldn’t get any better there, he relocated to Phoenix, AZ (where he did not know a single person). As he began to feel at home after building an expansive social circle, he moved to Hanover. Before Tuck, he spent four months backpacking across South America without knowing a word of Spanish (he now claims to know a few).