A Light for the World: Tuck Community Mourns Ed Winchester

Ed Winchester, executive director of marketing and communications at Tuck—dedicated father, Olympic rower, and proud Canadian—died April 22 at his home. He was 49 years old. 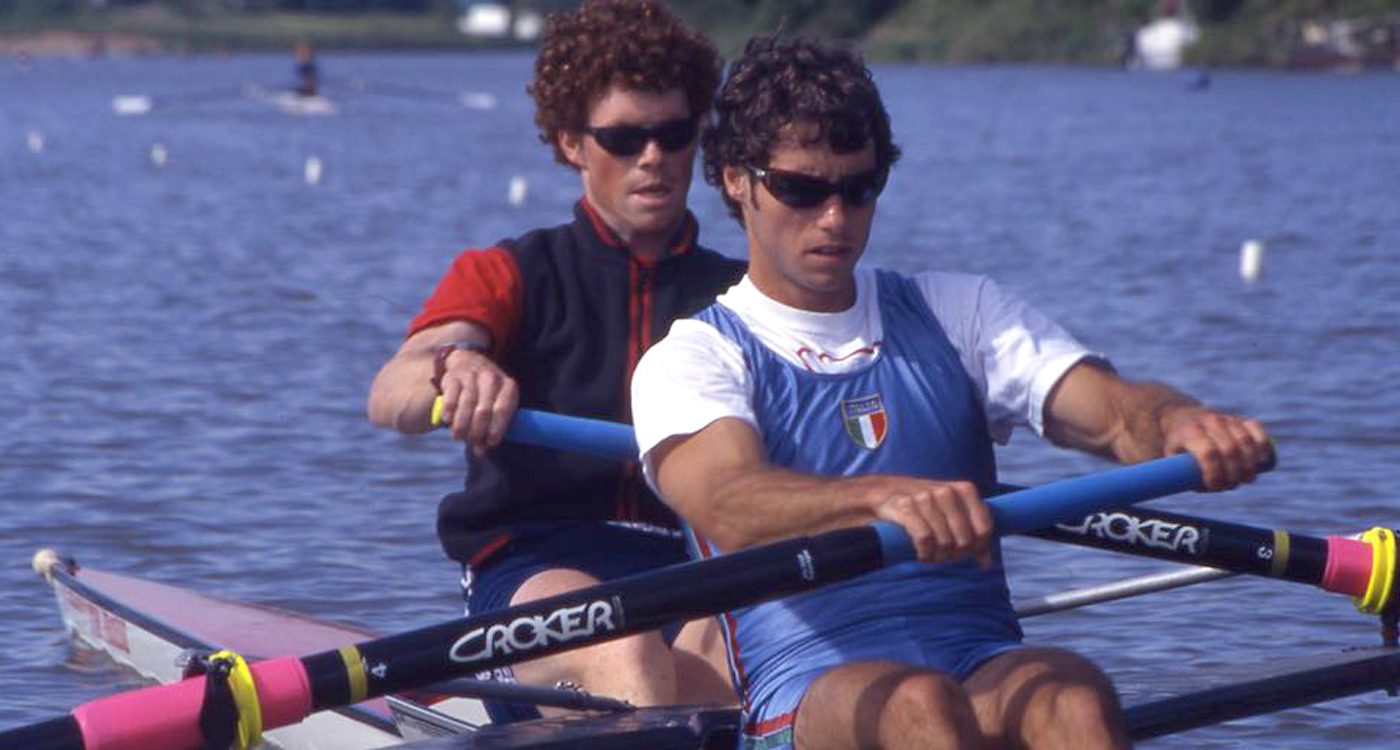 Friends, family, and colleagues remember Winchester for his tireless dedication to the sport of rowing, his warm sense of humor and infectious laughter, and his natural gift for storytelling.

Ed Winchester, who died April 22, was an optimist who looked for the best in every situation. His colleagues in the Tuck School of Business communications office saw it in his morning greeting—a toothy smile and a big wave for everyone he encountered.

Training is an optimistic act. Implicit in every erg workout and weight session is the idea that you can always get better—that who you are today doesn't have to be who you are tomorrow. This is what drew me and so many others to our sport, and what keeps me coming back year after year.

Those he rowed with saw it whenever the former champion oarsman, rather than dwell on a loss, congratulated the winners and worked to improve his own performance.

And it showed in his rowing journalism, a side gig to his role as executive director of marketing and communications at Tuck. In a story published April 10 on the Rowing News website, Winchester urged rowers to press on with individual training despite the loss of the summer racing season due to the COVID-19 pandemic.

"Training is an optimistic act," he wrote. "Implicit in every erg workout and weight session is the idea that you can always get better—that who you are today doesn't have to be who you are tomorrow. This is what drew me and so many others to our sport, and what keeps me coming back year after year."

It was on his erg—or ergometer, an indoor rowing machine—that Winchester, 49, died of natural causes at his Hanover home while working out.

His passing has shocked and saddened his co-workers, friends, and the entire rowing community. Winchester will be remembered as an insightful man of warmth and good humor. 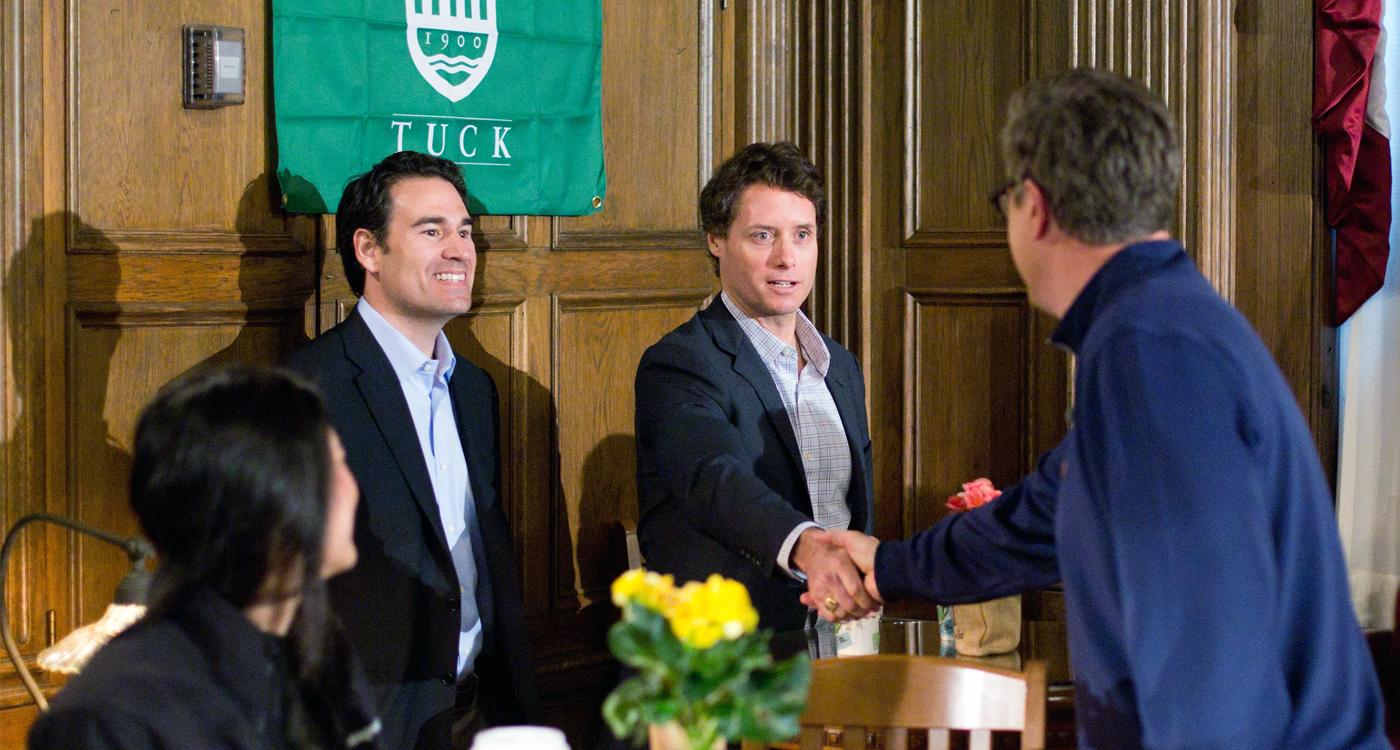 Winchester and brother Steve Winchester shake hands with Joe Scarborough of Good Morning Joe during a broadcast live from Tuck.

"Ed was a sound strategist, a discerning thinker, and a gifted writer," said Tuck Dean Matthew Slaughter in an email to the business school community. "I will be forever grateful for how he bettered our world by empowering others, and I will miss him dearly."

Winchester spent almost 13 years at Tuck, earning promotions over the years in the communications office, where he most recently led a team of 12.

"He had such a good attitude. He was silly and goofy and approachable, and he lightened the mood of every room he entered," said Lindsey Walter, director of public relations at Tuck. She said Winchester's colleagues got a kick out of how this accomplished athlete always managed to spill his coffee. "Ed was the master of words. We always joked that he had all the right 'wordy' words." 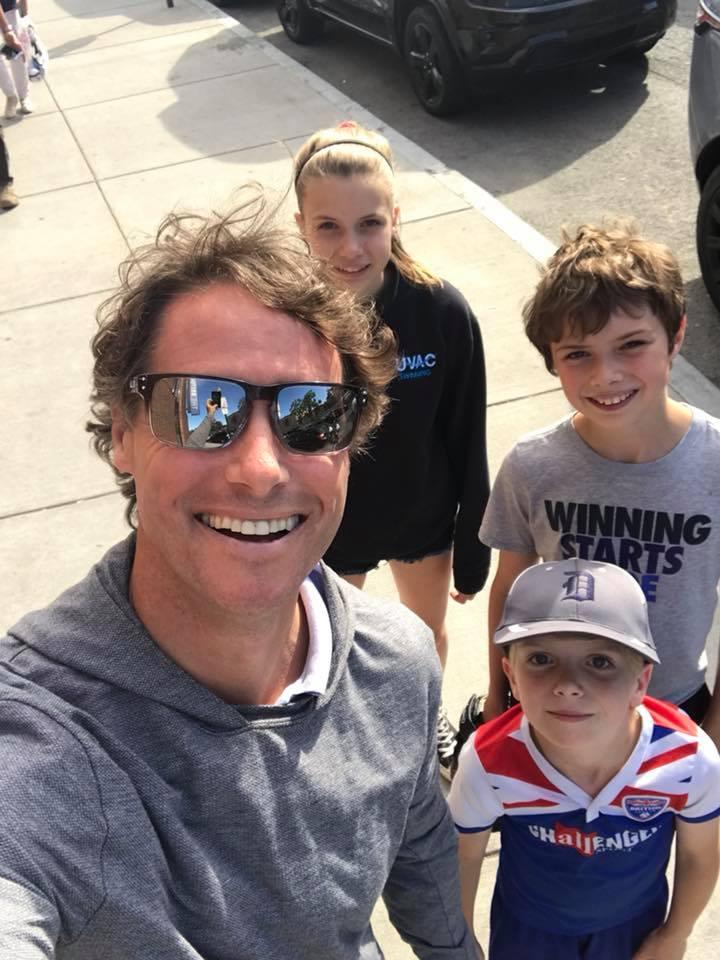 Winchester with his three children Ava, Noah, and Rhys. "We knew how important his kids were to him. He was often dashing out the door to get to one of their games," says Director of Public Relations Lindsey Walter.

Winchester was devoted to his three children, Walter recalled, and delighted in telling stories about their latest adventures. "We knew how important his kids were to him," she said. "He was often dashing out the door to get to one of their games."

Topher Bordeau, a former Dartmouth crew coach who had worked with Winchester at Rowing News, said Winchester was a regular at the Dartmouth boathouse.

"I'll most remember Ed for his keen sense of appreciation for the moment: the grit of an ergometer workout's final meters, the common but special events of fatherhood, and the satisfaction of a well-turned phrase," said Bordeau, now an associate director of admissions at Dartmouth. "His quiet joy in these moments was a gift to those of us lucky to share a few of them with him."

President Philip J. Hanlon '77 said Winchester was a leader, translating his experience as an elite athlete into adeptly managing the Tuck communications team. He played a significant role in the 2017 launch of Tuck's Next Step transition to business course, a certificate program for military veterans, Olympians, and elite athletes, Hanlon said in an email to faculty, students, and staff.

Winchester, a proud son of Canada, was an elite athlete—a five-time member of Canada's national rowing team and an alternate on the Canadian team that participated in the 2000 Olympic Summer Games in Sydney, Australia. That same year, he won gold in the Canadian men's lightweight pair in the senior world championship in Croatia. A year earlier, he brought home a silver medal in the men's eight.

After he left the sport as a full-time pursuit, Winchester stayed on the water, rowing on the Connecticut each summer and in the fall organizing a team to row in the Head of the Charles regatta in Cambridge, Mass.

He was a funny man, and his humor was a light for the world. He was a world champion oarsman and a writer of equal caliber and his professionalism in journalism elevated the rowing media and everyone who worked with him. We will miss him.

In 2008, he was inducted into the New Brunswick Sports Hall of Fame, which praised him for his "strong mental and physical toughness in an extremely demanding sport … truly an outstanding career on the national and international stage."

In addition to having served as editor of Rowing News, Winchester had been editor and publisher of AMC Outdoors, the magazine of the Appalachian Mountain Club. After college—he graduated from Carleton University with a bachelor's degree in journalism and earned a bachelor of applied arts from Ryerson University—Winchester wrote columns for the Canadian Broadcasting Company about his Olympic experience.

"Along the way, I've been outstanding, solid, mediocre and inconsistent," he wrote. "Twice, I've stunk up the joint. I have two world championship medals and a slew of international appearances in the lightweight fours. But for the Olympics—maybe my only chance to make it on CBC without tape-delay—I've been named a spare."

But Winchester "was not a spare in the very small world of career rowing journalists," wrote Rowing News publisher Chip Davis '93 in a remembrance of Winchester posted on the publication's website.

"He was a funny man, and his humor was a light for the world. He was a world champion oarsman and a writer of equal caliber and his professionalism in journalism elevated the rowing media and everyone who worked with him," Davis wrote. "We will miss him."

This story was originally published by Dartmouth News.