Tuck’s Initiative for Women started with a symposium. 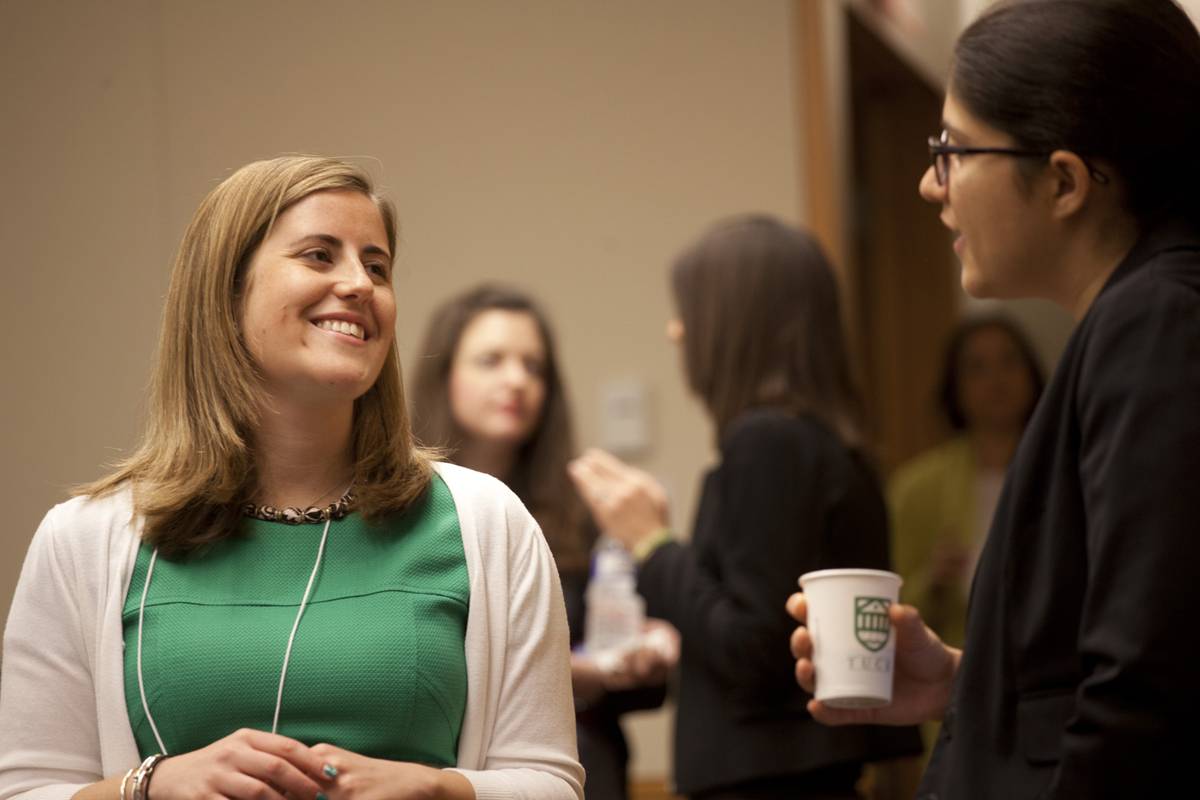 After she and members of her team met with Sheryl Sandberg to celebrate the publication of “Lean In,” Elyse Allan D’79, T’84, president and CEO of GE Canada, turned to her male CFO and asked how many conversations regarding maternity leave he had with the women he supervised.

“He just about died—he asked, ‘Can I even do that?’” Allan said during her keynote speech at the inaugural Tuck Initiative for Women Symposium. “It was very interesting that, as a male leader, he was nervous about that. The point is, as a leader—period—we have to communicate with and understand what our women want and need professionally so we can keep them.”

“When I came to Tuck, I noticed that you just didn’t hear female voices and perspectives as often as you seemed to hear males’,” said O’Brien. “Through conversations with Mo, Sally, and Erin, we decided that there were a range of topics, discussions, and activities that we needed to address that could be really exciting and vibrant to students, alumni, faculty, and staff.”

The launch of Tuck’s Initiative for Women occurred during the spring 2014 MBA Advisory Board meeting, where O’Brien and Gartner gave a presentation describing why they were seeking administrative support.

“The response from the board—both men and women—was immediate and passionate. They started telling their own stories of finding their own voices when they were here as students,” Tunnicliffe said. “There’s an extraordinary amount of enthusiasm from our boards and from our alumni, who wish this initiative well and thank the leaders who made it happen.”

So impressed were the members of the MBA Advisory Board with the initiative, in fact, that they underwrote the entire symposium, which began on Thursday, May 1. Attendees kicked off the conference with a discussion of gender in the business school context, moderated by Matthew Slaughter, associate dean for faculty and the Signal Companies’ Professor of Management.

On the following day, author Sara Laschever led a professional development workshop, “Learning to Ask: Women and the Power of Negotiation” before attendees broke for lunch and the keynote address, delivered by Allan. Framing her talk around the five capability areas she and GE value most for success, both personally and professionally, Allan discussed how everyone—but women especially—could benefit from an increased focus on: external focus, clear thinking, imagination and courage, collaboration, and expertise.

“When I think of my career or about the successful women I’ve known from all walks of life, there are the set of capabilities they share and the skills they’ve honed. First, they are attuned to the market and to the environment around them. Second, they’re focused and able to articulate their vision to others with clarity and passion,” Allan said. “Third, they have found their voice and they are courageous. Fourth, they collaborate, which means listening and respecting. Fifth, and lastly, they know what they don’t know and they leverage the competencies of others.”

Buoyed by the success of this first symposium, the Initiative for Women will provide additional support to broaden the conversation about gender dynamics at Tuck, including bringing in alumnae to participate in a “Women’s Voices” speaker series, hosting a series of women’s career advice seminars, and connecting students and alumnae in small-group settings. Elizabeth Winslow, senior associate director of the MBA program at Tuck, will serve as executive director of the new initiative.

“Throughout this process, we’ve felt so incredibly supported to take on this really big vision,” O’Brien said. “It’s an amazing feeling to know that I played a part in making the Tuck experience better for women—and that our remarkable Tuck women will continue this work.”

As the symposium concluded, Allan urged women—and everyone—to make the most of this groundbreaking initiative by championing each other, celebrating diversity, and epitomizing the highest ideals of Tuck’s one-of-a-kind school and community.

“You’re leaders already—that’s why you’re here. What we’re doing now is bringing out that next dimension so you can know and own it,” Allan said. “After all, there are so many other women who will be looking to you to be their mentor. They’ll be looking to you for your leadership in helping them find their voice. So be bold and claim yours. I can’t think of a better environment to do that than here.”