Fastow is proof that the road to ignominy is most often not well marked. His talk was part of the Choices & Challenges series organized by the Center for Business and Society. 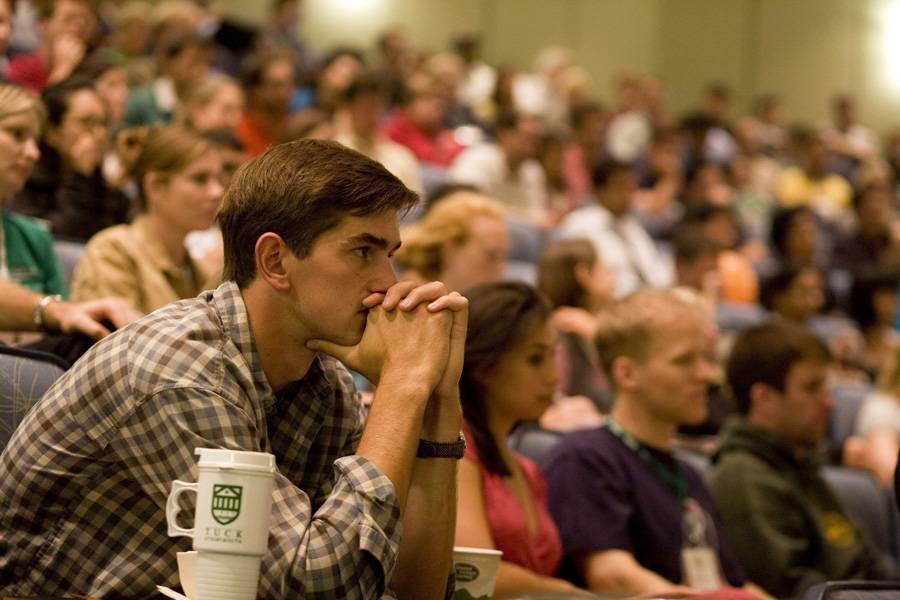 Fastow is proof that the road to ignominy is most often not well marked. His talk was part of the Choices & Challenges series organized by the Center for Business and Society.

There was a time, about 13 years ago, when Andrew Fastow had achieved the pinnacle of success and fame that could be expected of a chief financial officer. At the tender age of 36, he had been appointed the CFO of Enron, the hundred-billion dollar energy company. Just two years later, CFO Magazine gave Fastow an award for capital structure management.

But as the world learned in 2001, the laws of physics don’t apply to fame. When Enron imploded, causing $40 billion in market value to disappear along with the pensions of thousands of people, Fastow fell much further than he had ever risen, becoming the most hated person in America. Even his eight-year old son knew the right term for him now. “Dad, you’re not famous,” he said, “you’re infamous.”

Fastow, who served more than five years in federal prison for securities fraud, recounted the arc of this journey with candor and conciliation to Tuck students on October 8, during an event moderated by Richard Shreve, adjunct professor of business ethics at Tuck. The talk was part of the Choices & Challenges series on business ethics organized by the Center for Business and Society.

Fastow’s story is a perfect case study for business school students on the blurry line between genius problem solving and fraud. The same much-lauded “off-balance-sheet” strategies that Fastow innovated to make Enron seem financially healthy were the ones that, upon closer review, landed him in jail. His main mistake, he said, was ignoring the principles behind the rules he creatively circumvented. “I used loopholes in the rules to get around the principles of the rules,” he explained. “But it’s not always easy to know when you’re doing that.”

Indeed, it was not as if Fastow acted alone. According to Fastow, every sketchy deal he made was approved by accountants, attorneys, and the Enron board—the usual gatekeepers who guard against illegal action. The salient lesson was that these gatekeepers can also act as enablers. All it takes is a change in attitude. Lawyers, instead of warning about fraudulent statements, can delight in crafting disclosures that are “technically legal but completely incomprehensible,” Fastow said. Auditors and consultants, instead of raising red flags, can help shape the numbers to comply with generally accepted accounting principles.

Another important lesson was that a series of minor indiscretions can slowly accrete into a major crime. Fastow went astray not with one shocking act of fraud, but by degrees. Time after time, he chose from a menu of justifications: he was helping shareholders, “it was just a timing problem,” everyone was doing it. “We had a lot of immaterial stuff that added up to being material,” he said. In retrospect, these justifications were just a manifestation of his lack of character, he admitted. Greed, ego, and hubris all played an underlying role. “I wanted to be a hero by solving the problem,” he said.

When the talk became more of a dialogue between Fastow, Shreve, and students, the most daunting question was how to prevent another Enron-scale disaster, in a business environment where firms still employ legions of people to dream up ways to get around laws. The best hope for reform, Shreve said, is to educate the next generation of business leaders, something that Tuck does with its Ethics and Social Responsibility requirement in the core program. All students are required to take at least one mini-course that explores the complex ethical and social challenges of business.

“You’re going to find yourself in a position where you’re incented to do things really close to the line,” Shreve told students. “That’s why there’s an ethics program at Tuck.”

Fastow, by most accounts a brilliant man, is proof that the road to ignominy is most often not well marked. “No one’s going to say, ‘Hey, I’ve got a Ponzi scheme I want you to sign on to,’” he remarked. “It’s going to be much more insidious.”