One change in moving from Wall Street to a sovereign wealth fund is the time horizon.

Up until the financial crisis, it had been a classic Wall Street career for Tom Arnold T’91. 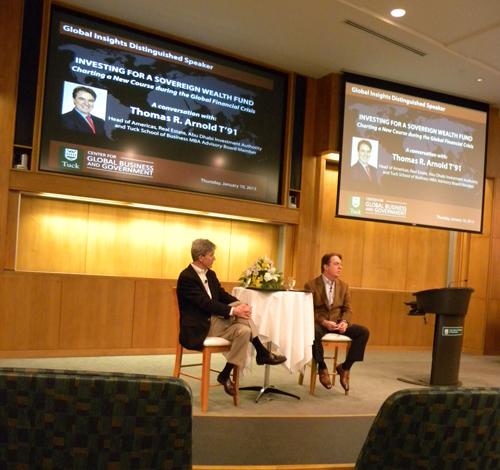 There had been stints at Salomon Brothers (now part of Citigroup), Credit Suisse, and ING. Then, in the depths of the global economic crisis in 2008, Arnold got an unsolicited call at his office with private equity firm Cereberus Capital Management from a recruiter asking if he’d like to move to the Middle East to work for a sovereign wealth fund.

Arnold eventually warmed to the idea, and took the job: as head of the Americas real estate division of the Abu Dhabi Investment Authority (ADIA), the governmental investment arm that invests the surplus oil revenues of the UAE’s wealthiest emirate. By some estimates, it is the largest such fund in the world, with more than $600 billion in assets. Those assets include not only stocks and bonds but also office buildings in Belgium and France, skyscrapers in Rio de Janeiro, and a stake in the company that operates Chicago’s parking meters.

One of the most significant changes in moving from Wall Street to a sovereign wealth fund is the time horizon for investments, said Arnold, a member of Tuck's MBA advisory board, in response to questions from Matthew Slaughter, director of the center and associate dean for faculty at Tuck. Performance at investment banks and private equity firms is measured quarterly, weekly, or even daily, he said. ADIA’s goal is to preserve Abu Dhabi’s wealth for future generations long after its oil reserves have dried up, allowing the fund to seek investments that may not immediately rise in value. “You’re looking for generational purchasing power preservation,” said Arnold. “You don’t have to be overly sensitive to short-term volatility.”

A second change was adapting to Abu Dhabi’s button-downed corporate culture. Prima donnas aren’t tolerated, and consistent performance is rewarded with leadership responsibility, he said. Changing his investment mindset was helped by changing location and changing colleagues, many of whom are from the Middle East, South Asia, and other far-flung locales and often dress in traditional attire, such as the white dishdasha robes of the Persian Gulf states and Indian saris. “It was a function of releasing your own self-imposed constraints,” said Arnold. “The geography, climate, and culture are all so different. You’re sitting in a room and there are two people in suits, four people in dishdashas, two people in saris. You realize you’re someplace different.”

With two children in college in the U.S. and a spouse who lives in both Abu Dhabi and the U.S., Arnold says working in the Middle East has made for an unorthodox family life. Moving 7,000 miles from New York has meant missing more family birthdays and weddings, yet the opportunity to work at a fund whose assets dwarf those of the largest private equity firms has been an experience that would have been impossible to replicate in the U.S.

“My experience in life is it’s always the things I didn’t try to do that I regret,” Arnold said. “When that phone rings, don’t hang up.”