People and events at Tuck.

People and events at Tuck.

One of John “Jack” Byrne’s earliest visits to Tuck came as an executive-in-residence during the historic blizzard of 1978 that dumped two feet of snow on Hanover. Byrne, who had recently taken the helm of the troubled Government Employees Insurance Company (Geico), was staying in a student residence room in Buchanan Hall and could have hunkered down amid canceled classes and unplowed roads. Instead, he joined snow-liberated students in playing an impromptu game of ping pong, and staged a dramatic re-enactment of the takeover of Geico in Cook Auditorium using students as actors. That weekend led to Byrne’s first gift to Tuck: an endowed ping pong table for Buchanan.

Byrne, who died March 7 of cancer in Hanover, was not just a colorful executive but a successful one. His business career grew formidably in the 1980s, as did his relationship with Tuck and Dartmouth. He built Geico into one of the nation’s largest auto insurers and a crown jewel of Warren Buffett’s Berkshire Hathaway Inc. He then helped turnaround another struggling insurer, Fireman’s Fund, which he later sold to Allianz before building White Mountains Insurance Group into an insurance holding company with $14 billion in assets in 2012. His successes led Buffett to dub him the “Babe Ruth of insurance.” His friendship with Buffett led to numerous student visits to the Berkshire Hathaway headquarters in Omaha. Buffett, in turn, has come to Tuck for fireside chats.

Byrne became one of the first executives to join Tuck’s board of overseers without having a degree from either Dartmouth or Tuck, and his family’s endowment of Byrne Hall in the early 1990s dramatically reshaped the campus. The family’s gifts also have included an endowed professorship in economics, now held by Andrew Bernard.

Despite his success, Byrne never lost his sense of humor about business. He is remembered, for example, for waxing philosophical about Winnie the Pooh as a general manager, and once delivered a keynote address at Tuck’s investiture on the topic. Sharing similar thoughts with Fortune magazine, he said that, “Pooh is an unlikely leader. But his very unlikeliness puts him in the leadership role time after time. He’s a relaxed realist who never thrusts himself forward, and it’s surprising how often it works out.”

Forty-five health care professionals who comprise the inaugural class in Dartmouth’s Master of Health Care Delivery Science (MHCDS) program will receive their degrees in June, at the commencement ceremony held for all graduating classes of Dartmouth’s undergraduate and graduate programs.

The MHCDS class of 2013 was not just the first class to complete the program—a low-residency model of hybrid pedagogy organized by Tuck and The Dartmouth Institute for Health Policy and Clinical Practice (TDI)—but the first group of people in the history of education to receive a degree in health care delivery science. This reflects the nascent nature of this field of study, one that joins the three pillars of medicine—scientific research, clinical practice, and evaluation science—to determine how best to deliver medical intervention to everyone who needs it.

“It’s been a true adventure, and this class has been our co-creator,” said program director Katy Milligan D’90, T’07. “I think the success of the program is a testament to their entrepreneurship, their engagement, and their commitment to changing the world.”

Students were on campus in the second week of January for their final 10-day residency, a session designed to synthesize all they’ve learned and conclude their Action Learning Projects. Those projects were a chance for the participants to put their training to use in a practical setting, with real results. For example, a team of five participants from the Long Island Jewish Medical Center (LIJ) focused on improving the quality of life for people with chronic obstructive pulmonary disease (COPD), a non-curable ailment that can cause shortness of breath, chronic bronchitis, and emphysema. After taking the Health Care Marketing and Population Health courses, the team used data analysis to discover that the top three populations with COPD in their system were Korean, Chinese, and Pakistani.

“We started to transition our patient education to target people in those communities and their leaders,” explained Michael Goldberg MHCDS’13, the associate executive director of finance at LIJ. The results of the effort have been promising, with substantial decreases in 30-day readmission rates, ICU use, and mortality for COPD patients, while maintaining the cost-per-case in a rising cost environment. “It’s exciting,” said Goldberg, “because our system has asked us to be the model for managing chronic care patients as part of a bundled payment initiative.”

Goldberg and his classmates are excited to not only reform health care in their home environments, but to leave a legacy of health care education at Tuck and TDI. To that end, the class is authoring a white paper expressing their vision of what health care reform should be. Every member of the inaugural MHCDS class also contributed to the class gift: a symposium series that will draw from topics covered in the white paper.

The oil spills from the Exxon Valdez and the Deepwater Horizon had a lot in common. Both became front-page stories and posed similar challenges for management, who had to simultaneously juggle cleanup efforts, government relations, and accident investigations. But to see a major difference between the two, look no further than their CEOs. Exxon’s Lawrence Rawl survived a shareholder effort to oust him and retained his spot for four years after the spill. BP CEO Tony Hayward, however, had his departure announced just 12 days after oil stopped spewing into the gulf.

Why the divergence of fortunes? Research by T’13s Marret Arfsten and Kevin Tay, presented in Paris at the Council on Business and Society’s inaugural international forum in November, points to an important cultural change between 1989 and 2010: the rise of the 24-hour news cycle. Hayward, the students suggest, was paralyzed by the huge number of new media outlets covering the 2010 incident. The intensified scrutiny led him to variously accept responsibility for the incident, blame contractors, and famously groan, “I’d like my life back.”

“Accountability is often seen as beneficial, but there are forms of scrutiny that can have unintended consequences,” says Tay. “These negative effects are often subtle, eliciting social and cognitive coping responses that may not be immediately evident to the CEO and his advisers. We considered how coping mechanisms such as impression management, self-justification, and cognitive overload can lead to poor decision making or defensive reactions.”

Before coming to Tuck, Peter Kruger T’13 had one of those revelations that probably only come to database managers who play in rock bands: there needs to be a better way to find and review live music. “It was tough to get the word out about a show when it was happening,” he recalled, “and it was tough to get reviews of your show from your fans.”

That thought was dormant until Kruger took the core course, Introduction to Entrepreneurship, where he put together the idea for a mobile phone app called Rock Lobby. Initially the app was designed to help bands plan events and book venues, but then Kruger and Darius Chehrzad T’12 collaborated and realized the app would be hollow without a strong following of fans. How to get fans? Give them a platform for reviewing shows.

The idea won Kruger and Chehrzad a spot in Tuck’s Barris Incubator Program. Kruger refined the app during the fall and winter while Chehrzad, who now works as an analyst at McKinsey & Company, worked on business development, venue relations, and financial projections.

Rock Lobby, a free app for the iPhone and Android phones, debuted at the South By Southwest music festival in March, where drink coasters bearing its logo helped spread the word. “I couldn’t imagine a better culmination to my MBA experience,” Kruger said. 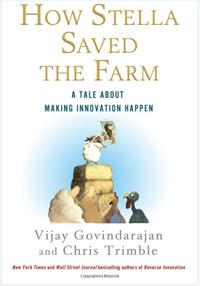 As professors who write scholarly articles and popular books about innovation, Vijay Govindarajan and Chris Trimble have plenty of opportunities to get their research into the hands of practitioners. But do busy executives actually have time to read? Govindarajan thinks that the answer, mostly, is no. “Time is their scarcest resource,” he said. “Give them a 200-page book and they may read the first chapter and put it away.”

So they tried a different route: the parable. On March 12, St. Martin’s Press published How Stella Saved The Farm: A Wild and Woolly Yarn About How to Make Innovation Happen, a compact book in the spirit of George Orwell’s Animal Farm. With a cast of characters that includes sheep, horses, cows, and chickens, it tells the story of a farm run by animals that needs to innovate to survive.

That might sound fun but light on the management lessons. In fact, the tale is a composite of dozens of case studies performed by Govindarajan and Trimble on companies such as IBM, Deere & Company, and BMW. As such, the book presents challenges familiar to executives but offers them through the easy fiction of a parable.

The result is a story that practitioners can digest quickly yet critically. “Because it takes place on an animal farm, executives read it thinking it has nothing to do with General Electric or Pepsico,” Govindarajan explained. “So they begin to discuss it without any defensive behavior.”

BUSINESS & SOCIETY
Carrots and Sticks at the Business and Society Conference 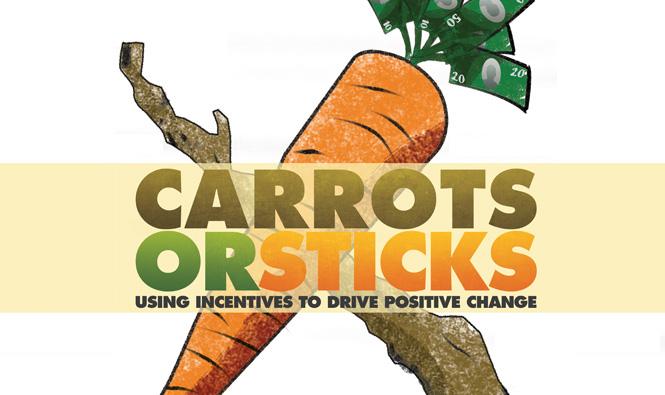 Michael Brown, the co-founder and CEO of City Year, kicked off this year’s Business and Society Conference, the annual student-led event that brings together leaders from different fields to discuss the important role business can play in creating a more sustainable world. Supported by Tuck’s Center for Business and Society, the 2013 conference took place on Thursday, February 28 and Friday, March 1, and was organized around the theme of using positive and negative impacts—carrots and sticks—to drive positive social change.

Brown and his law school roommate founded City Year in 1988, a non-profit organization focused on “building democracy through citizen service, civic leadership, and social entrepreneurship,” according to its website. At first, City Year tackled a wide assortment of social issues; more recently it has focused solely on the United States’ high school dropout crisis.

With Brooks Sports Inc. on the rise again, CEO Jim Weber T’86, was looking for a way to help groom one of the company’s rising young executives, David Bohan. One of the bestselling brands of running shoes during the jogging-crazed 1970s, Brooks fell on hard times in the 1980s before a recent resurgence that has helped grow revenues at 20 percent annually to about $400 million. To sustain growth in the years ahead at the Berkshire Hathaway Inc.-owned unit, Weber saw a need to develop the company’s top talent—and decided the Tuck Executive Program (TEP) was the best way to do it.

“David was in the chief operating officer spot and with our rapid growth he’d been playing much more of a lead business role,” said Weber. “I wanted to give him an opportunity to build out his leadership tool kit as well as get a refresher on business topics. He came back wide-eyed.  He really progressed as a much more self-aware and situationally-aware leader.”

Weber is just one of a growing number of Tuck alumni to sponsor colleagues to TEP, Tuck’s flagship executive offering. In the last five years, Tuckies have referred more than 25 participants to the three-week program, which combines the teaching of broad, strategic management principles with an emphasis on personal leadership improvement.

For Bohan, now the president and COO at Brooks, one of the program’s greatest assets was the interaction with other top-flight executives from the U.S., Europe, and Asia. “We all bring different perspectives to business so it is a very strong learning experience of understanding what challenges they run into in their business as well as the challenges I run into in mine.” www.tuck.dartmouth.edu/TEP