In Its First Run, December Bridge is a Hit 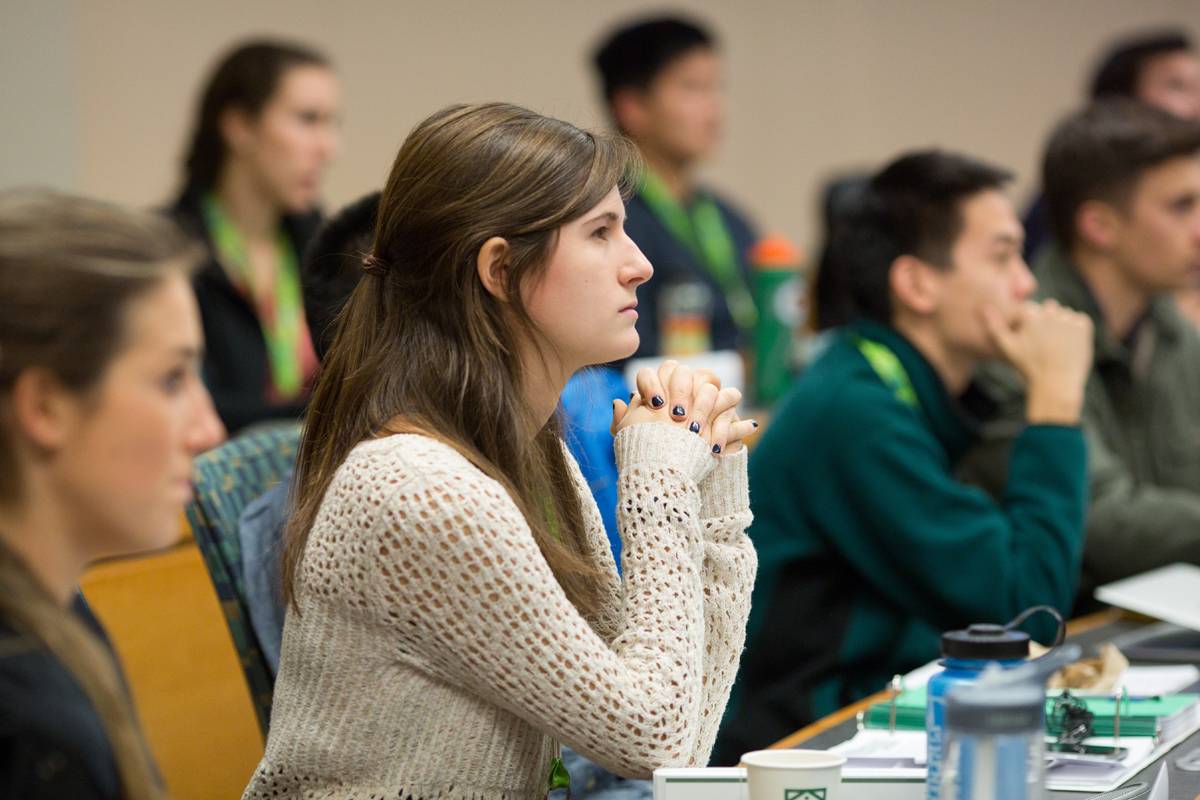 If you want to know the market potential for Google’s self-driving cars, you might want to ask Janine Leger D’15. She and five teammates in the December Bridge Program at Tuck just delivered a 40-minute PowerPoint presentation on that topic to a panel of business people from different industries. On another team, Danny Reitsch D’16 and his colleagues assessed the market value of Keurig-Green Mountain, concluding that it’s currently undervalued by the stock market. “The market’s not taking into account the huge growth that’s going to come from new products, partnerships, and markets,” Reitsch said, sounding like the investment banker he hopes to be one day.

Leger and Reitsch are part of the class of 53 undergraduates, mostly from Dartmouth, who took part in the first-ever December offering of Tuck’s Business Bridge Program, which ended on Friday. Since 1997, Bridge has offered rigorous business education to students from liberal arts colleges who want to prepare for a career in the business world. Traditionally, Bridge took place only during the summer, but this year Tuck began offering the program during Dartmouth’s break after Thanksgiving. The idea was that running Bridge in December would give students more freedom to use their summers for internships and other real-world experiences. The trade-off is that December Bridge is three weeks, instead of four in the summer session, so it’s an even more intense period of learning. Students take at least four classes per day, including Saturdays, and the rest of their time is filled with homework, group projects, panel discussions, and career exploration.

“This group of students has been engaged, hardworking and tremendously capable,” said Bob Hansen, the Norman W. Martin 1925 Professor of Business Administration, and co-faculty director of Bridge. “They’ve been a real pleasure to work with and to get to know.”

Being thrown into courses such as financial accounting, managerial economics, and corporate finance sounds daunting, but students report that the structure of the curriculum has made the difficulty of the academics easier to handle. Some of the most rigorous courses are administered during the first weeks, when energy levels and enthusiasm are high, and those lessons are cemented further during group exercises and in sessions with the six Tuck MBA students working as teaching assistants. “I was hesitant about applying to business school,” Leger said, “but I’ve loved this program so much that there’s no doubt I’m going to apply now.”

Tuck’s Career Development Office (CDO) augmented the academic curriculum with a host of career-oriented activities. The CDO held panel discussions on various industries, tutored students in interview techniques, and reviewed resumes, all in an effort to smooth the transition from college to the working world and give Bridge students the benefit of Tuck’s extensive alumni network. “We at the CDO have been impressed by the caliber of students attending the December Bridge Program,” said CDO associate director Deirdre O’Donnell. “They were very engaged in discussions relating to career choices and many took advantage of individualized coaching sessions.” For Reitsch, that sort of help is one part of a larger effort—by faculty, administrators, and alumni—to provide the resources and knowledge that will lead to greater self-awareness and inform his job search. “I’ve got a strong foundation of supporters at Tuck,” he said.

Leger already had a job lined up when she enrolled in Bridge, doing management consulting at Deloitte in Boston. She’ll start there as early as this coming summer, and Bridge has given her the confidence that she can tackle the challenges ahead. “I was quite nervous about entering consulting with a liberal arts background,” Leger said. “Bridge has given me a foothold to approach the work I’ll be doing, and the insight that I really enjoy group work and presentations.”

Reitsch, one year behind Leger, enrolled in Bridge to get ready for a summer internship. “This was a way for me to distinguish between different roles in banking and finance,” he said. “Now I feel very prepared for the recruiting process this winter.”

The Bridge students’ accomplishments over the past three weeks have been no small feat, and the Tuck faculty are proud of their academic and professional growth. “We have provided an intense learning experience, forcing the students to work collaboratively in teams while demanding that each of them push themselves individually to cover a great deal of information,” said Gail Taylor, a visiting associate professor of business administration and the other co-faculty director of Bridge. “They have truly risen to the occasion.”