The MHCDS class of 2013 leaves a legacy of innovation and commitment in healthcare. 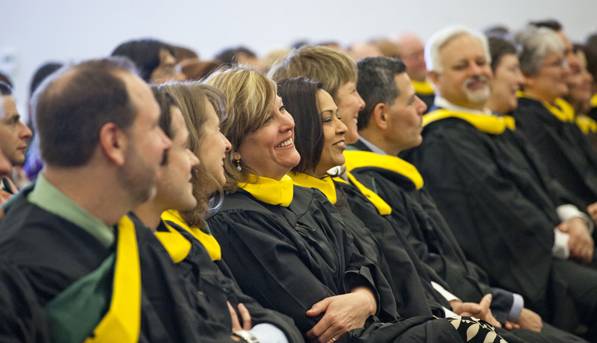 Forty-five healthcare professionals who comprise the inaugural class in Dartmouth’s Master of Health Care Delivery Science (MHCDS) program were celebrated at a special investiture ceremony at the Hanover Inn on Saturday, January 19.

They will officially receive their degrees in June, at the commencement ceremony held for all graduating classes of Dartmouth’s undergraduate and graduate programs.

The MHCDS class of 2013 was not just the first class to complete the program—a low-residency model of hybrid pedagogy organized by Tuck and The Dartmouth Institute for Health Policy and Clinical Practice (TDI)—but the first group of people in the history of education to receive a degree in healthcare delivery science. This reflects the nascent nature of this field of study, one that joins the three pillars of medicine—scientific research, clinical practice, and evaluation science—to determine how best to deliver medical intervention to everyone who needs it.

“It’s been a true adventure, and this class has been our co-creator,” said program director Katy Milligan D’90, T’07. “I think the success of the program is a testament to their entrepreneurship, their engagement, and their commitment to changing the world.”

Students were on campus in the second week of January for their final 10-day residency, a session designed to synthesize all they’ve learned and conclude their Action Learning Projects.  Part of that process included a healthcare outcome simulation built by the non-profit incubator ReThink Health. The simulation allowed the students to play out different kinds of investments in community health, from bike paths and better school lunches to new hospital wings, to determine their healthcare costs and outcomes over 10 or 20 years. “It was a springboard for discussion,” said Milligan, “and then the students debriefed to talk about policy lessons, teamwork, and how different investments require different coalitions.”

The Action Learning Projects were a chance for the participants to put their training to use in a practical setting, with real results. For example, a team of five participants from the Long Island Jewish Medical Center (LIJ) focused on improving the quality of life for people with chronic obstructive pulmonary disease (COPD), a non-curable ailment that can cause shortness of breath, chronic bronchitis, and emphysema. After taking the Healthcare Marketing and Population Health courses, the team used data analysis to discover that the top three populations with COPD in their system were Korean, Chinese, and Pakistani.

“We started to transition our patient education to target people in those communities and their leaders,” explained Michael Goldberg MHCDS’13, the associate executive director of finance at LIJ. The results of the effort have been promising, with substantial decreases in 30-day readmission rates, ICU use, and mortality for COPD patients, while maintaining the cost-per-case in a rising cost environment. “It’s exciting,” said Goldberg, “because our system has asked us to be the model for managing chronic care patients as part of a bundled payment initiative.”

Goldberg and his classmates are excited to not only reform healthcare in their home environments, but to leave a legacy of healthcare education at Tuck and TDI. To that end, the class is authoring a white paper expressing their vision of what healthcare reform should be. Over the next few weeks, groups will be writing different segments of the paper and an editorial committee will compile it into a single document—a sort of healthcare manifesto.

Every member of the inaugural MHCDS class also contributed to the class gift, a symposium series that will draw from topics raised in the white paper.

“The power of this program to me is that we don’t only improve our system,” said Goldberg, “but our peers will apply our project across the U.S. That will truly change the cost of healthcare while improving it at the same time.”