We caught up with keynote speaker Michael Montgomery D’76, T’77, who runs Montgomery & Co., a boutique investment bank focusing on mergers and acquisitions and raising capital for private companies in the online media and technology sector. 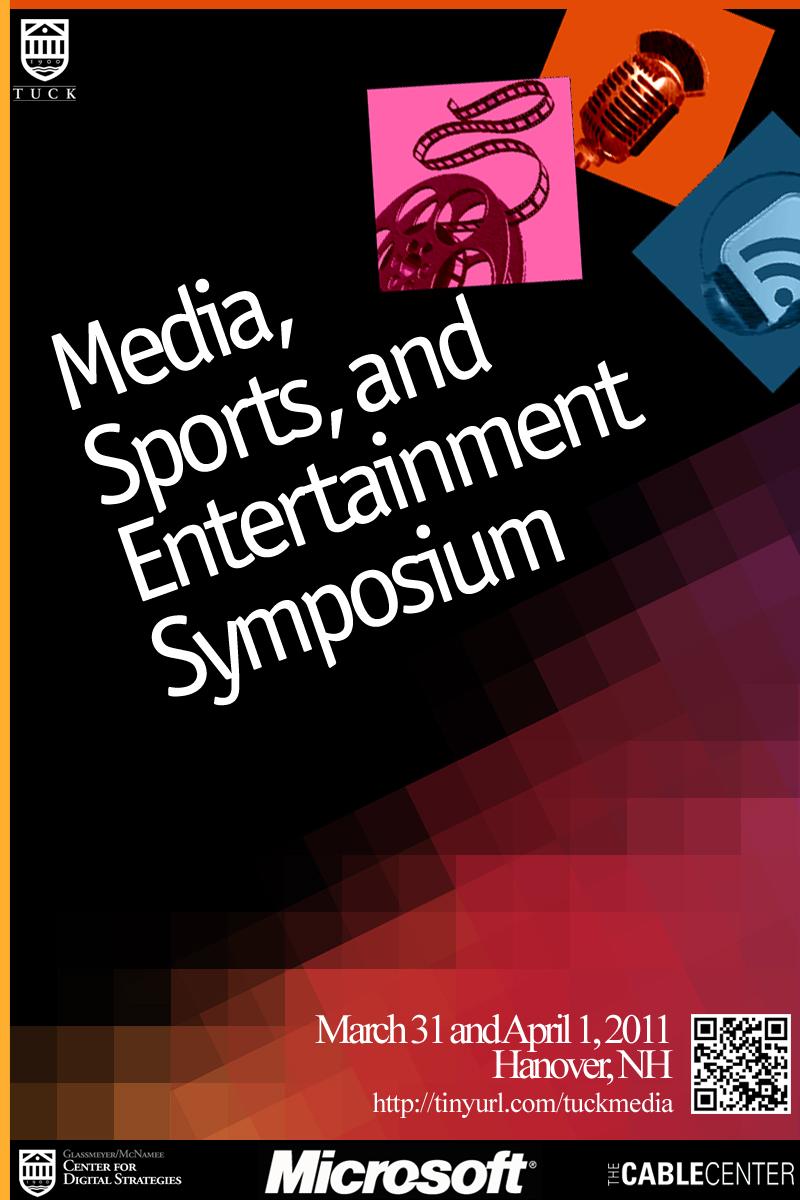 Tuck’s annual student-run Media, Sports, and Entertainment Symposium began with a screening and question-and-answer session with Nelson Cheng, somebody, symposium co-chair Elissa Kline T’11 says, “who’s essentially just like Tuck students.” Cheng has created a series of webisodes called “The Consultants” — a show in the vein of “The Office” that replaces middle-managers with highly paid back-office desk jockeys who take themselves too seriously. But Cheng isn’t your average filmmaker; he’s a former product manager at Amazon and Google. “I think that just reflects how everybody’s empowered now to be a producer and a writer,” Kline says.

With that same spirit of inclusivity, the broad theme of this year’s symposium, which ran from March 31-April 1, was “the state of the media” and featured panel discussions on the business of social gaming, the changing landscape of the sports industry, and the evolution of advertisements from print to banners to video. “We’re trying to give a wide view of what’s going on,” Kline explains.

The keynote talk on Friday was given by Michael Montgomery D’76, T’77, who runs Montgomery & Co., a boutique investment bank in California that focuses on mergers and acquisitions and raising capital for private companies in the online media and technology sector. Montgomery was in conversation with Matt Rightmire T’96, formerly VP at Yahoo! and currently Managing Director at the Hanover-based venture capital firm Borealis Ventures.

Montgomery “understands what’s coming and where the investment opportunities are,” says Kline. We caught up with him on his way to Tuck to learn more about his career and where the online media industry is headed.

You’ve worked for companies such as Disney, DreamWorks and Sega GameWorks. Talk about the path you took to where you are today, and why it makes sense.
I think one of the values of my great Tuck education is it allowed me to change careers and to not do the same thing for 40 years. I started off in the oil business and I got a great experience at ARCO for almost nine years, both in doing deals and understanding finance and learning how to be a businessman. Then I went to Disney, where I was the chief deal person for almost eight years. So the art of finding a compromise, being creative, seeing opportunities to do things and bringing parties to bear, was very important. I had several detours, where I’ve actually ended up running companies, which has been very interesting—maybe a little different from the deal aspects of what I’ve done in the past—but equally valuable. Ten years ago, I wanted to be in a more entrepreneurial environment, so I joined my brother and formed this company. At that point, it was a chance to be my own boss and to have a direct shape in building something. But I had a lot of deal experience so I was confident that I could get people to hire me to do transactions. It wasn’t an easy transition. It took a couple years, but once it got going, it’s been a real treat.

How do you define media today?
Media is anything about content: about what people watch, where people get information. It’s not just entertainment. I broadly define it as the creation and distribution of content. At Montgomery, our focus has always been on how technology impacts media.

What questions are you thinking about today as you advise clients on the potential for media and technology companies to be profitable?
Where are the companies being created that are disruptive to existing companies? Those are the companies I want to bank. If I can find them, those are the companies that can become very valuable very quickly, because they’re more innovative than the bigger media companies. A lot of our work is trying to see where things are going and trying to identify the winners in those spaces and then hopefully building a relationship with them so that we can be their banker.

What general qualities are you looking for in such companies?
You always start with the management team. That’s the hardest thing to find. When you get one that’s smart, experienced, driven—with a good idea —that’s the best. A good idea with a poor management team never works. A great management team even with an OK idea oftentimes works.

As far as ideas go, are you seeing trends in what’s working?
We’re seeing trends, but you have to be careful because you can get surprised so quickly. Who would have guessed Twitter was going to work? Some things are obvious, like Facebook, and some things are not so obvious. Then there are things that are obvious that don’t work for a while, like these cloud-based storages like Box.net—they’ve been around for 10 years and they’ve never taken off until now.

What are the major challenges and opportunities today in online media?
Social media is changing the face of media so quickly. It’s interactive media now, it’s engaging—it’s not just sit back and watch a video or a film or TV. The new generation wants to engage with it—they want to chat about it, they want to mash it up and do something with it, share it with their friends. And a lot of their discovery is word of mouth through the social networks, which is very different than what traditional media had to do. Games have become such an enormous element of the media landscape. It’s not just hardcore games, it’s casual games and using games for advertising. The notion of making things fun and interactive is changing media dramatically.

What are some companies flying under the radar but with great potential?
There are tons. If you’re young, you’ve got companies like Mind Candy, which makes Moshi Monsters, just exploding for the eight-year-old crowd. They’re adding a child per second onto their sites. You’ve got cloud-based applications. You’ve got game companies like Zynga that have just exploded in the last couple of years. You’ve got Groupon and Living Social—the whole notion of couponing and local advertising. You’ve got some mobile companies that are just extraordinary in how fast they’re growing in mobile advertising and the provisioning of mobile. And I think the tablet has had an enormous impact already is profoundly going to change education. These are all opportunities where companies can become very large very quickly.