One Step Closer to the South Pole

Richard Smith T’11 and his Polar Vision team passed their first test of endurance and planning. Next stop: Antarctica.

Last fall, Richard Smith T’11 was preparing for his 600-mile ski across Antarctica by going for pre-dawn runs in the cold. In March, Smith and the Polar Vision team upped the ante and put in 10 days of training on Baffin Island, an inhospitable wedge of land locked in sea ice near the Canadian Arctic. They also lost team member Andrew Cooney to a recurring injury and added a new man to their roster: Sean Swarner, who survived two bouts with cancer and has summited the highest peaks on all seven continents.

Swarner’s experience should come in handy as they lead Alan Lock, their blind team member, from the Antarctic coast to the South Pole to raise money and awareness for the visually impaired through out the world.

On Baffin Island, they spent a few days in the classroom with Mattie McNair, a veteran polar explorer who lives in Baffin’s largest city, Iqaluit. McNair led the first women’s expedition to the North Pole and has skied to the South Pole numerous times. She taught the team the surprisingly complex skills of dressing, eating, sleeping, and traveling in chronic sub-zero temperatures. “Moisture management was my one key takeaway,” Smith says. “If you get wet, you’re in trouble.”

Armed with that knowledge, they ventured out onto the frozen sea, pulling sleds weighing 150 pounds. The conditions were similar to those they expect to encounter in the Antarctic: bitter cold, low visibility, high winds, and a white horizon disappearing into oblivion. They covered 45 miles in five days, and in the last two days traveled roughly 11.5 miles per day, the same rate they hope to travel on their expedition.

For Smith, the physical challenges were considerable, but the psychological difficulties were especially vexing. “We were in whiteout conditions, just looking at the back of the pulk of the guy in front of us, and the wind was howling,” he tells. “I was really regretting not taking my iPod.” They would walk for two miles at a time, and then take a break to eat snacks of bacon, cheese, Clif Bars, and chocolate that they tried to keep unfrozen in their parkas. “Psychologically, it was all about the next break,” he says. 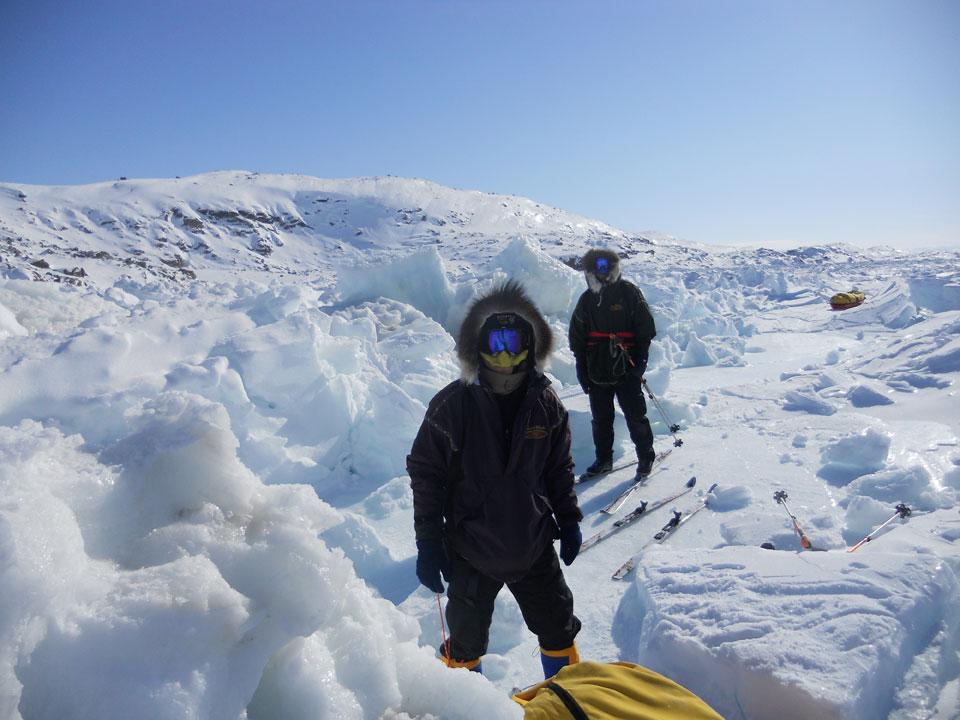 When they stopped for the day, the work of melting water, drying clothes, and cooking dinner began. The team divided these responsibilities and attempted to achieve a second-nature choreography in setting up the tent, starting the stoves, and preparing boil-in-bag meals with plenty of butter, for extra calories. They slept in sleeping bags provided by Marmot that are rated to minus 40 degrees Fahrenheit, and kept anything that needed to stay warm (water bottle, pee bottle, camera, GPS, contact lenses) inside them. “I’ll never forget waking up on my first night and seeing a big covering of snow over the front of my sleeping bag where I was breathing during the night,” Smith recalls.

Now back in Hanover, Smith and the team have another challenge ahead of them: raising enough money to fund the expedition and make significant contributions to Sightsavers and Guide Dogs for the Blind. Their goal is to raise at least $450,000 for the two charities, “but we would like to bust that completely,” Smith says. To do it, the teammates are knocking on doors, using their networks, and telling the story of the mission. Since their trip coincides with the 100th anniversary of the Amundsen and Scott expeditions that raced to the South Pole, Smith hopes the potential media attention will entice corporate sponsors to open their checkbooks.

Tuck, Smith says, has made this project possible for him in a few ways. In addition to its generous financial support, being at the school has given him the confidence that he can pull off the trip. “This is an environment where folks have done amazing things, so you start to think, Why Not? I can do that!” he explains. The MBA curriculum, as well, has been valuable training for the entire enterprise. “I’m drawing on elements from my leadership, negotiation, and marketing classes, because we very much think of Polar Vision as our own little startup,” he says. “We need capital, we have a PR objective, we have significant planning and logistics to figure out. Being at Tuck gives you all the tools to do that.”

Executing an expedition of this magnitude involves a bit of a chicken-or-the-egg scenario. How do you attract sponsors if you’ve never done this sort of trip before? And how do you get an expedition on your resume without sponsors? By proving themselves on the ice at Baffin Island, the team gained the credibility that lessens this dilemma. “Now we can look people in the eye and say, ‘We can do this,’” Smith declares.