The discussion, part of the Britt Technology Impact Series, expressed the nascent nature of big data in commerce. 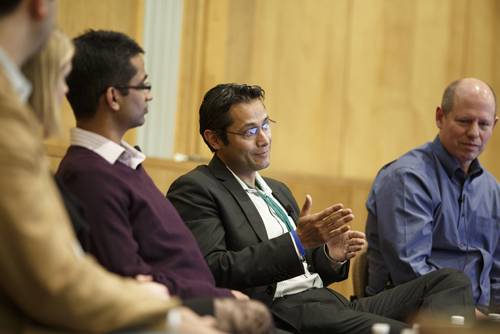 The term “big data” might sound vague and technical, something only uttered by analysts over their cubicle walls, but that’s changing fast.

Geoffrey Nunberg, the linguist contributor to NPR’s Fresh Air, dubbed big data—the phenomenon of collecting huge amounts of information through network connectivity—the word of the year for 2012, because it “had a huge surge in venues like Wired and The Economist,” he said, “and … if the phrase wasn't as familiar to as many people as ‘Etch A Sketch’ and ‘47 percent,’ big data had just as much to do with President Obama’s victory as they did.” In short, be prepared for the next phase of the information revolution.

The Glassmeyer/McNamee Center for Digital Strategies at Tuck has recognized the importance of big data for a while now, and this year has organized its Britt Technology Impact Series around the idea. The series has already covered big data’s impact on democracy and Hollywood. Last week, in a panel discussion titled, “Getting to Know You: Big Brands and Big Data,” which was part of the annual Tech@Tuck conference, it was commerce’s turn in the spotlight.

The panelists, experts from a range of companies, all agreed that big data’s potential for marketing and sales is immense but, as yet, little understood. For one, the amount of information about consumers and their behavior, preferences, and purchasing history is so vast that making sense of it will take some time. Second, big data presents a privacy question: how much personal information are consumers willing to share? If a company, in its desire to predict and respond to a consumer’s desires, ends up creeping someone out by knowing too much, the purchaser’s trust and loyalty (and perhaps dollars) are lost. “We’re very sensitive to this,” said panelist Alexis Hoopes T’06, the director of online merchandising at Nordstrom, Inc., “because we want to make sure we have a good customer experience.”

Naturally, different companies will have different uses for big data. For Caesar’s Entertainment Corp., it’s about “learning how customers are engaging with us, and how to improve the value proposition and drive loyalty,” said Ruben Sigala, the senior vice president of enterprise analytics at the company. For MasterCard Advisors, which doesn’t deal with consumers directly, the challenge of big data is “figuring out what our clients”—financial institutions and other corporations—“want to do with transaction purchase behavior information,” said Michael Angus T’87, the company’s group head of global payment.

There is a substantial upside to using big data properly, the panelists agreed. Take a business like Wag.com, a pet specialty company owned by Amazon. Many of the purchases on the site are for repeat items, like pet food. If the company can use big data to slightly increase the repeat rate, explained Philip DeGisi T’09, director of merchandising at the company, the payoff can be large in the aggregate. From a fraud prevention and risk management perspective, the opportunity is just as promising.  MasterCard Advisors has already used big data analytics to cut its credit card fraud rate by a factor of four. “That’s a massive impact on the profitability of a credit card business,” he said. Simply put, “this kind of analysis is going to be required in industry,” said Sudev Balakrishnan T’07, the director of e-commerce and product management at Bluefly, Inc., an online retailer of off-price fashion.

For all its potential, however, big data still has plenty of unknowns. For instance, can consumer purchasing information be used to push people toward certain products they wouldn’t have bought otherwise? Perhaps, but not now. “Influencing behavior in e-commerce is extremely hard,” said Balakrishnan. “It’s much better to respond to their interests than guide them down a path.” Another question is how granular companies should get when they analyze data. “We just don’t know yet,” said Angus. “We have to test and retest.”

When the discussion hit upon the world’s immature understanding of big data, DeGisi advised the audience that information only takes a company so far. “You still need the right message, the right product, and the right execution,” he said.