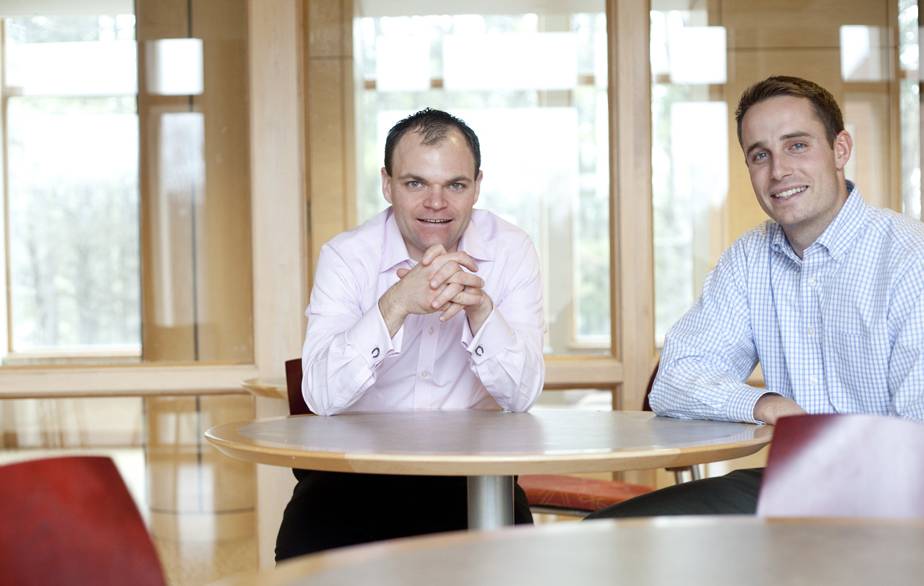 The Box, a creation of T’14s Eric Winn and Mike Parshley, will open for business this spring.

Hanover, with its well-defined Main Street abutting a spacious quad and ivy-covered buildings, has everything you’d expect in a college town: restaurants, bars, coffee shops, pizza joints, bookstores. There’s just one thing missing: a food truck. These rolling fast-food businesses, often serving fresh salads and sandwiches made with locally-sourced ingredients, have become increasingly popular over the past four years, especially where hungry, cash-strapped students congregate. According to the National Restaurant Association, food trucks generated $650 million in revenue in 2012, accounting for 1 percent of U.S. restaurant sales. Emergent Research, a small-business consulting firm, expects those revenues to triple or quadruple by 2017 as trucks tap into the growing demand for food that’s quick, fresh and casual.

The absence of a food truck at Dartmouth struck Eric Winn D’04 T’14 and Mike Parshley T’14 as an opportunity to both start a business and leave a legacy on campus. The men teamed up during their first two weeks at Tuck and have been working on the truck idea ever since. A few months later, Shiro Yagaki T’14 joined the team. On March 24, 2014, the first day of classes after Tuck’s spring break, they expect to open the window on The Box, a student-run business serving lunch, dinner and late-night fare at various locations on campus.

“We wanted to get real business experience and yet do something that’s interesting,” said Parshley, who came to Tuck after a business analyst job at Fidelity Investments. “We didn’t feel there’s enough delicious dining nearby, and eventually we saw that feeling was shared among the community.”

Rather than start a conventional business that the two would have to run or sell, they decided to model The Box after Tuck Stuff, the student-run retail store at Tuck. “The idea is that it allows students to have operational experience in a food business, and that it will be handed down from generation to generation,” Parshley added. Like Tuck Stuff, The Box will allow students to make the tough decisions that go along with any real business, and yet have the safety net of an academic environment so the consequences of an occasional misstep aren’t dire. “We believe in the power of experiential learning,” said Winn, “and based on our conversations across the college, this belief is widespread. This business will advance that goal directly.”

Winn and Parshley spent part of their first year doing research and talking to officials at Tuck, Dartmouth and in Hanover’s town government. They realized that others had made initial attempts at bringing a food truck to Hanover but had given up when they learned that the town’s vendor ordinance didn’t have a provision for food trucks. Undeterred, Winn and Parshley focused on getting the key decision makers from Dartmouth and Hanover in the same room to work out a solution. Ultimately, the town will either amend its ordinance or allow food trucks as an extension of food carts, which are already permitted in Hanover.

The men attribute this success, in part, to the network they were able to build at Tuck—among administrators and faculty. “We basically cast this wide net and started talking to folks,” Parshley said. And the network grew as they worked on their business idea in Introduction to Entrepreneurship, their First Year Project, and Advanced Entrepreneurship. Their contacts provided them with creative solutions and access to key stakeholders at the college and town.

In their second year, Winn and Parshley have pivoted from initial research to execution, which includes understanding the economics of a food truck business, making a compelling case for a food truck at Dartmouth, and soliciting and pitching investors. They’ve also expanded their team to include Pete Shively T’15, Lauren Pappas T’15 and Tyler Harvey TP’15, as well as eight Dartmouth undergraduates.

Like many Tuck students, Winn and Parshley didn’t come to Tuck with a specific plan to start a business; instead, they found business school the perfect environment to try something new. Winn, for example, wanted to branch out from his experience at a food wholesaler. “I didn’t know if entrepreneurship was a path, but I knew I wanted to start something,” he said. In addition to The Box, Winn has started Literacy in the Upper Valley, a non-profit dedicated to getting children to read. Parshley, for his part, was motivated by an urge to leave Tuck better than he found it. Starting a business just happened to be a fun, educational way to do that. “It’s just been a great ride,” he said. “It was something outside my comfort zone in some ways, but it has been a great experience.”

Both men credited the Tuck community as a key ingredient in their start-up. The personal scale of the school, they said, has allowed them to make rapid progress on their idea, through inspiration and substantive advice. “Part of the reason to come to Tuck was to build relationships with the faculty,” Winn said. “I’ve got six to eight people I can call at the drop of a hat, and they welcome that call.” In addition to help from the faculty, Winn and Parshley were introduced to town officials and potential investors by members of the Tuck community. “The friendliness of the community has been amazing,” Parshley said.

Come spring, if all goes according to plan, the community will see a return on its kindness, in the form of dishes such as spiced lamb meatballs, garlic hummus, kale salad and other offerings—served just steps away from Tuck Hall.