U.S. Companies Losing Out on Infrastructure Jobs in Emerging Markets

Jose Fernandez D'77 urges U.S. firms to get in the game. 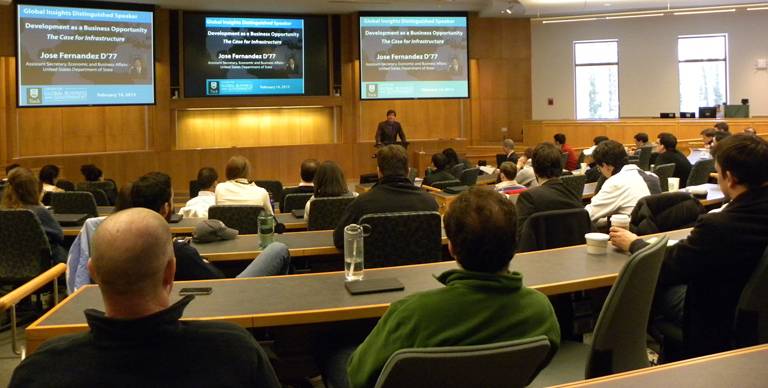 As assistant secretary of state for economic and business affairs, Jose Fernandez D’77, has been advocating for greater U.S. business participation in overseas infrastructure projects, especially in the developing world.

“Unfortunately U.S. companies are not in the game,” Fernandez told a group of graduate students at the Tuck School of Business, in an address sponsored by the Center for Global Business and Government. “They risk losing more ground to competitors as the market grows.”

Developing countries need to invest $60 trillion in roads, ports, electricity and other infrastructure projects by 2030, according to McKinsey. Brazil alone plans to spend $470 billion in an effort to improve transport and utilities in advance of hosting the 2014 World Cup and the 2016 Summer Olympics. Mexico’s President Pena Nieto has announced plans to spend about $850 million on a new rail project across the Yucatan peninsula. 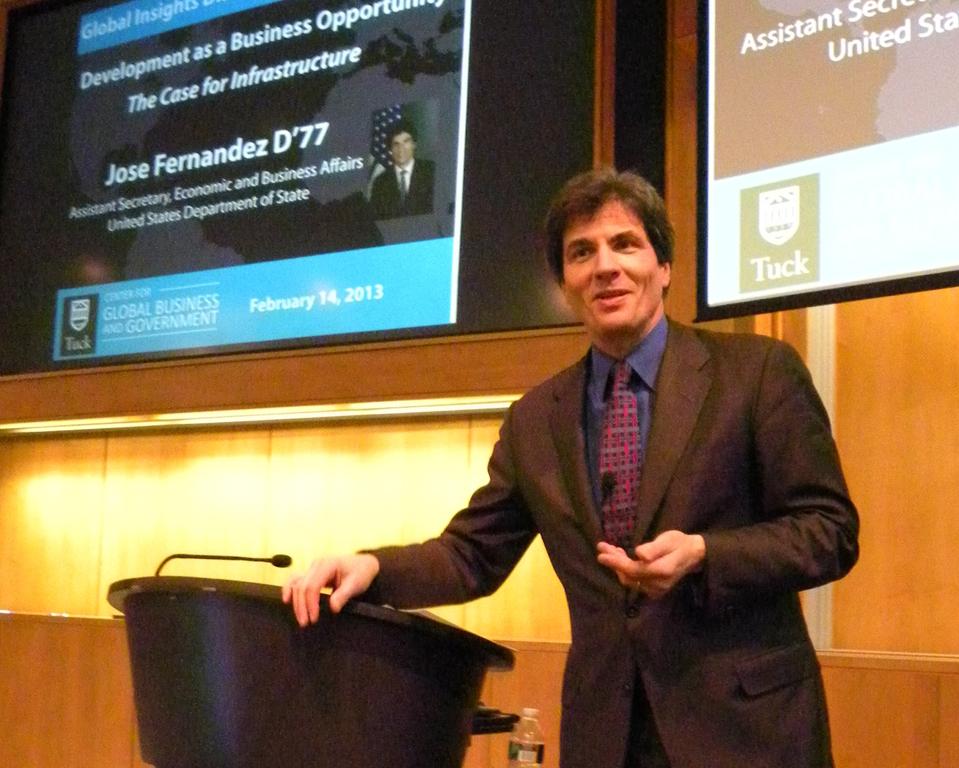 But American companies are unlikely to play a major role in such projects. U.S. businesses have just 13 percent of the international infrastructure market, trailing both European and Chinese competitors, Fernandez said. Of the ten largest international infrastructure companies as ranked by project investment by the World Bank between 1990 and 2011, none were U.S. based.

Fernandez cites several reasons for this. First, the domestic infrastructure market in the U.S. is fragmented among localities and most projects in areas like roads are undertaken at the state and municipal level—meaning that small companies with good contacts control much of the market. In Europe, infrastructure projects are often put out to bid nationally and companies compete both nationally and internationally. Meanwhile Chinese companies too have emerged as national giants in areas like roads, dams and railroads.

Fernandez also pointed out that European and Chinese companies are more likely to be vertically-integrated and able to execute “turnkey” projects such as dams from start to finish, while U.S. companies tend to focus more on specific tasks. In many cases, U.S. companies also face a playing field that is tilted against them, as they compete against state-owned giants from China or other countries that don’t pay taxes, shareholder dividends and other preferences.

European and Chinese governments are also more effective advocates for their national champions than the U.S.—and China is much more open-handed in providing financing: The Export-Import Bank of China not only provides more financing than its U.S. counterpart, it is larger than the portfolio of all G-7 countries combined, Fernandez said. Finally, in an industry where bribery is hardly unknown, U.S. companies are at a disadvantage because of the Foreign Corrupt Practices Act, a 1977 law that allows companies to be prosecuted in the U.S. for bribing foreign officials.

Fernandez’s economic and business affairs bureau at the State Department is trying to address some of these disadvantages. It’s encouraging other countries to pass similar anti-bribery statutes and trying to use U.S. diplomats posted overseas to gather market intelligence about potential projects. The agency is also organizing trade missions with the goal of helping the U.S. win contracts in countries like Libya and Tunisia that are looking to invest in new projects in the wake of the Arab Spring.

“We’re trying to spread the word, help the private sector recognize the opportunity,” Fernandez said. “Now is the time to get in the game. The emerging markets are not going to sit around forever and wait for American companies to come…The infrastructure train is going to leave the station whether we’re there or not.”