The Tuck Study Group Experience; Or, How I Learned to Stop Worrying and Love Fall A

Ale is a first year-year student at the Tuck School of Business. Before coming to beautiful Hanover, she worked in clean tech and management consulting in San Francisco. After Tuck, she hopes to harness the forces of business to protect the natural world. She is originally from Miami, Florida but prefers the sweater-friendly climate of the Upper Valley. Contact Ale at Alessandra.g.jochum.tu16@tuck.dartmouth.edu.

“Ok, now it’s your turn, Ale. Time to test drive those T-Accounts yourself.”

Vivek and the four other members of my study group were looking at me expectantly—hopefully. They had spent the last two weeks patiently coaching me through the tedious process of building financial statements as part of our accounting course, and this was MY time to shine.

An hour later, I had walked the team through the creation of (most of … come on, I’m no Vivek) a statement of cash flows. I studied biology as an undergrad—a subject with shockingly little crossover with financial measurement and reporting—which was why I was particularly proud of my accomplishment.

This moment also illuminates the wonder of the study group. It’s a feature of the Tuck Core that I didn’t know much about before I got here, but has largely defined my academic experience so far. Here’s how it works: Before Fall A, the first of two notoriously rigorous sets of core courses, Tuck randomizes the first-year students and places them into five-to-six person groups. You meet your groups for breakfast—which is the very first event—on day one of orientation, a timing choice that surprised me at the time but that I now completely understand. Study groups collaborate on most of the homework in Fall A and Fall B, meaning that two months into school, I know the other five members of my group pretty darn well. It makes perfect sense that that’s how we kicked off orientation week.

The SWOT team (the title we’ve lovingly given ourselves in cheeky reference to a framework we learned about in Analysis for General Managers) functions as a safety net. We compare answers on our Capital 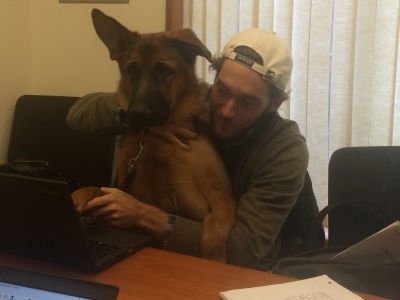 Markets homework to make sure we all understand everything before we turn it in. We fix small kinks in each other’s understanding of demand curves, and help each other think about the big picture of corporate culture at Zynga. For group work, we swap major responsibilities, easing each other’s burden when someone has a particularly crazy recruiting week.

Like I mentioned, Fall at Tuck is hard. Going through the academic challenges alone would have made it so much harder. Let’s be honest, I would much rather work through my mountains of homework with good friends and occasional canine distractions (see photo above!) than alone in the library.