Who are the 47 percent? Accounting professor Richard Sansing gets at the answer.

Who are the 47 percent? Accounting professor Richard Sansing gets at the answer. 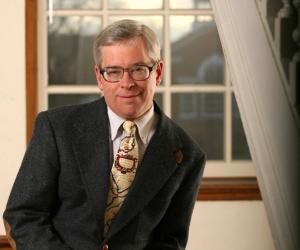 Hold on. Forty-seven percent of Americans pay no income tax? Actually, that’s true. According to an analysis from the non-partisan Tax Policy Center, about 76 million people who filed income tax returns in 2011 (roughly 46 percent) did not owe the government a dime in income tax.

But for Tuck accounting professor Richard Sansing, whose research involves the microeconomic effects of taxation, the story is not that simple. He has three words that add some much-needed context to Romney’s now-infamous statement: distribution, transfers, and payroll.

During the interceding generation, those numbers moved farther apart. In 2009, the lowest quintile actually had a negative tax liability—they received more from the government than they paid, while the highest 20 percent of earners paid 94 percent of the income taxes.

This is not the result of some left-wing conspiracy to over-tax the rich. In fact, the tax distribution closely mirrors the income distribution, and the top 20 percent of households are generating more of the income pie than ever before.

“That’s due to a lot of things over which the political class in this country has very little control,” Sansing says. China and India entered the global economy and drove down the cost of unskilled labor. Advances in communication and technology integrated the global capital markets, allowing people to produce a lot more income than was previously possible.

Blunt as it may be, the rich have gotten richer, both absolutely and relative to the rest of the population. So goes their income tax liability.

Transfers
“Unfortunately,” says Sansing, “we often frame policy debates in ways in which labels are decisive.”

As a label, “income tax payer” makes someone sound like a responsible, conscientious, contributing member of society. The corollary, if you listen to Romney, is that people who don’t pay income tax are somehow irresponsible moochers.

What gets lost in this analysis is that the tax code over the last 35 years has increasingly become a vehicle for transferring wealth from high-income people to low-income people. Whereas the government used to hand out welfare checks, now it’s more common to give low-income people financial help through the earned-income tax credit (EITC).

The EITC was first implemented in mid-1970s, as part of the welfare-reform efforts of the day, and it was designed to encourage people to join the workforce by giving financial assistance to low-income workers, especially those with children. About 20 years later, President Clinton signed the Republican-sponsored Personal Responsibility and Work Opportunity Reconciliation Act of 1996, a huge reform of the welfare system that included workforce development and limits on the amount of time a person could receive direct cash payments. The number of families receiving cash welfare has since declined to historically low levels, whereas the EITC is considered one of the government’s most effective anti-poverty programs.

“If you frame the question very narrowly—What’s the share of income tax liabilities?—then it’s going to show less liability for the people getting the earned income credit,” explains Sansing, who teaches the courses Taxation and Business Policy, and Managerial Accounting. “But if you step back you can see there are a lot of ways the government can transfer wealth from high-income groups to low-income groups. The labels have changed, but I’m still seeing dollars from this group going to this other group.”

The point is that a welfare check and a tax credit have similar distributional effects, but the latter affects the distribution of income tax liabilities whereas the former does not.

Payroll
There’s another reason why looking solely at income tax liability is misleading: working people also pay payroll taxes (not to mention sales and property taxes, but we’ll stick to payroll). In fact, federal revenue is comprised in equal measure of payroll and income taxes: about 40 percent for each.

“Governor Romney’s statement is literally true,” Sansing says. “But if payroll tax is like income tax, a tax on your labor income, why are we drawing a line between them?”

Indeed, if you broaden the focus to include total federal tax liabilities, all income quintiles contribute something to nation’s revenue demands, and the space between the quintiles is not nearly as large as it appears in the income tax-only picture.

“There are a lot of subtleties to the story,” Sansing cautions.