To innovate for a country like India or China, you have to think very differently.

Professor Vijay Govindarajan believes only businesses can solve the world’s most intractable social ills. His forthcoming book will show them how. 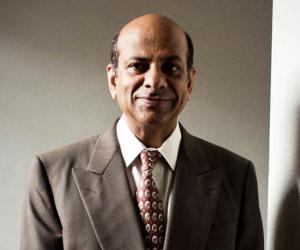 As a kid growing up in a small village in India, Vijay Govindarajan was close enough to extreme poverty to witness it destroy the promise of youth, yet removed enough to think about it critically. Govindarajan, the Earl C. Daum 1924 Professor of International Business, didn’t have to look farther than the light bulb in his house to know that great ideas could have profound effects on society. But just as Thomas Edison did, he also realized that innovation has two components in unequal measure: inspiration and perspiration. “People seem to be much more interested in the creativity part—the inspiration—whereas I felt much of the struggles I saw in India were in execution,” he says. “We have great ideas, but nothing happens.”

That observation has formed the foundation of Govindarajan’s career as a leader in the field of innovation research. Over the past 10 years, he and fellow Tuck faculty member Chris Trimble T’96 have written two books on the importance of execution in innovation: 10 Rules for Strategic Innovators, and The Other Side of Innovation. In a few months, they will release a third book on the topic, but this time they focus on a concept coined by Govindarajan called “reverse innovation,” the process of designing products and services in the Third World markets they are meant to serve, and then using those innovations to cost-cutting effect in the First World.

Govindarajan crystallized his theory of reverse innovation in 2008 while he served as General Electric’s chief innovation consultant and professor in residence, but the idea got a big boost in 2010 when he and strategy consultant Christian Sarkar posed a provocative question on the Harvard Business Review blog: Can we design a $300 house for the poor? The question spawned a social networking site with 2,500 members, along with a global design contest to push the idea from abstraction closer to reality. It was also the basis of Govindarajan’s third place ranking on the 2011 Thinker’s50 list, a biennial ranking of the world’s top management thinkers, and his related “Breakthrough Idea” award.

Why don’t companies pay enough attention to execution in the innovation process?
I point to three reasons. Somehow the idea is more glamorous, and people like to do the glamorous thing. Execution is dull, it’s boring, it takes a long time. Second, ideas don’t cost money; making the ideas happen requires resources and commitment. Third, only during execution do you have conflict between the old and the new. If you’re GE or Procter & Gamble or any other company, when you innovate you have to create a new thing. Suddenly you’re allocating resources to the new venture, and the existing business says, Wait a minute, why are you allocating resources to something that’s not making money?

As an example of reverse innovation, you wrote about GE creating an inexpensive, portable ultrasound machine for the Indian market. What did you learn from that?
I learned that if you want to innovate for India or China, you have to think very differently. The customers are different, the problems are different, the affordability is different, and the conditions under which they use the products are different, so you’ve got to take all of that into account.

But then GE brought that cheaper machine back to the U.S., right?
Yes, that’s the second part of reverse innovation, and it’s a great example. In this country, there are three problems with the health care system: costs, access and quality. Why did we get into this situation? It’s because we think of innovation in this country as spending more money. Whenever we want to solve the problems of health care, we say, Let’s push the frontiers of medical science. Cost is the last consideration. Whereas, in India, you can’t spend. Therefore, Indians think of innovation from a very different vantage point: they spend less and get more. Therefore, they start at frugal thinking. That’s where the U.S. health care system is now going.

For your forthcoming book, you studied eight companies and organizations that have implemented reverse innovation to great success. What’s one of your favorites?
We wrote a chapter on what Jim Yong Kim, the president of Dartmouth, has done with Partners in Health. The point of that chapter is to show the fallacy of our assumption in this country that there’s only one way to do medicine—the expensive way. Treating tuberculosis in this country probably costs $15,000. But it’s a chronic disease, which means that the key is taking medication every day. If you miss a couple days, the whole thing is wrecked. That’s been the problem in these poor countries. It’s not that they didn’t have medical help, it was that the people weren’t taking their medicine. Partners in Health used community health workers to make sure people took their medication. They reduced the treatment cost of tuberculosis to $100 per patient. Here, we hospitalize those patients, which drives the cost up. There, they keep the patient in their home and use the community health workers. Guess what? They brought the same concept to the U.S. to treat HIV, another chronic disease. It started in Haiti, and now Brigham and Women’s Hospital uses the same idea. They can treat the patients at a fraction of the cost of a regular hospital.

What’s the status of the $300 house project?
The six winners of the global design contest will come to Dartmouth for four days in January to partner with students and architects to work on the design. Step two is to build a prototype in Haiti, and step three is to build a model village there. I think in the next year we will go a long way toward showing the world that a $300 house is possible, not just an academic exercise.

Your book will be published in April. Where do you go from there?
I’m really committed to seeing how we can apply business principles to solving complex and wicked social problems. Business has been criticized of late as not a force for good. There’s some justification for that. But I believe business is a force for good, not evil. Without business, we wouldn’t have the quality of life we have today. And management itself is a technology, and that’s why we have the Tuck School—to teach that technology. Business principles and what we teach at Tuck have important roles to play in the advancement of society, and therefore my passion is to see how we can redirect some of the capabilities of business to solving what I call the “wicked” social problems—health, housing, electricity—the basic things society lacks. That’s the direction I’m going in, and that’s consistent with the reverse innovation journey.