Career Success For Class of 2014 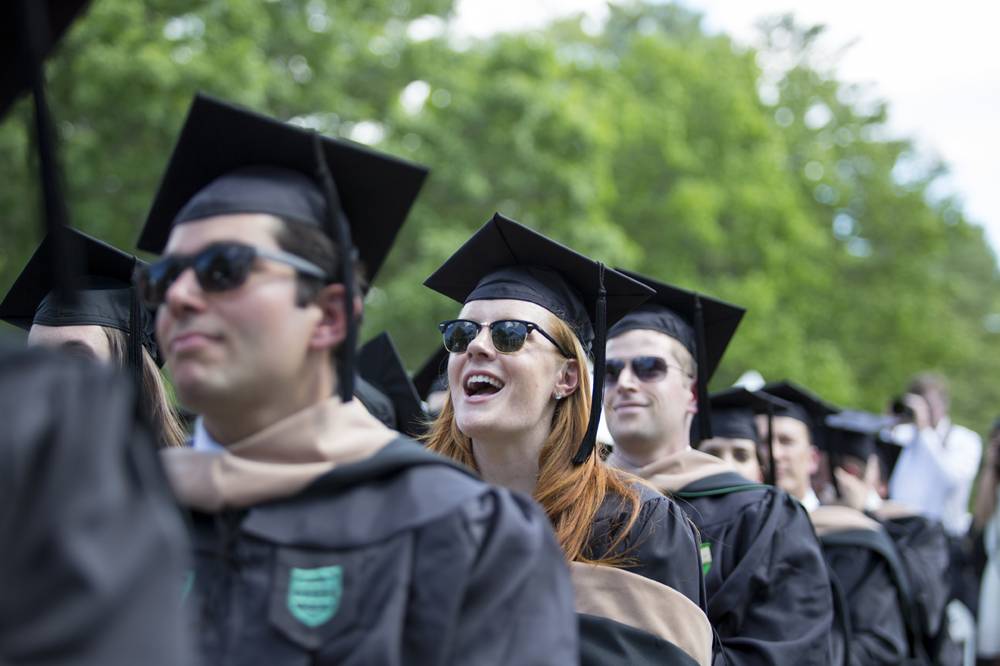 Tuck’s class of 2014 continues the school’s strong track record in the job market.

It’s a good time to be a Tuck graduate. For the past three years, the percentage of second-year students with jobs or job offers at graduation has been steadily increasing. 2014 is shaping up to be as strong as 2013, when Tuck had the highest percentage of the class with job offers three months after graduation among the top MBA programs and the second-highest level of compensation (starting salary plus signing bonus), according to US News & World Report.

That’s good news, of course, but it isn’t exactly a surprise. Tuck has been at or near the top of MBA job placement for a long time, a function of the school’s individual-focused career services including industry-specific coaching expertise; leading MBA recruiting partners; and passionate alumni support.

For Career Development Office executive director Jonathan Masland, the news is in the trends. This year, for example, saw a 65 percent increase in the number of technology firms hiring Tuck MBAs. Tuck students were in demand at leading global consulting firms, too, with roughly 20 percent of T’14s going to McKinsey & Company, Bain & Company, and the Boston Consulting Group. And it was a particularly strong year for international students, both in the percentage of students finding jobs and their compensation packages. “We are really pleased with the achievement of the class of 2014,” Masland said. “It’s a testament to the students’ marketability and hard work.”

Here are the stories of three T’14s whose Tuck experience served as a powerful launching pad to interesting and rewarding careers.

Caitlin Hodge, Hewlett Packard
Most people take years to reach the C-suite of a Fortune 500 company. Caitlin Hodge T’14 will get there just a few months after graduating from Tuck. Hodge, who worked in investment banking and the nonprofit sector after college, will be working closely with Hewlett Packard CEO Meg Whitman, at the company’s headquarters in Palo Alto, Calif. Reporting to Whitman’s chief of staff, Hodge will play an internal consulting role in marketing, sales, operations, finance, or whatever else comes her way. “This is a once-in-a-lifetime chance to work for a female CEO of a major firm,” Hodge said. “I had other options but I knew I had to take this one.”

Hodge’s story is a compelling example of the tradition at Tuck of nurturing and mentoring students from the moment they choose to come here. Six months before Hodge arrived on campus, she was already talking on the phone to T’13s about her career goals. They edited her resume, gave practice interviews, answered questions about how best to use her time at Tuck. A few months later, in the summer before her first year, Hodge participated in the annual conference organized by the Consortium for Graduate Study in Management, an organization that works to increase minority representation in MBA programs and business. Tuck is one of 17 MBA schools in the Consortium. The conference is six days long and is a chance for new MBA students to network with schools and potential employers. That’s where Hodge first connected with HP, and by the beginning of her first year at Tuck, she had secured a summer internship with the company.

Hodge’s full-time job in Whitman’s office is more than a chance to get exposure to many different business areas; it’s a chance to work with one of Hodge’s role models. “Whitman started her career at Bain, then worked at Disney, built eBay, and now is at HP,” Hodge said. “She’s done a lot of pivoting, and that’s what I want to do. Working for people who have done things you want to do is really important.”

Benjie Moll, Arx Urban Capital
Benjie Moll had found the perfect place to work for his summer internship—at the New York-based Atlas Real Estate Partners, a forward-thinking investment group  that was founded by alumni of his undergraduate alma mater, Tufts University. There was just one problem: they had never considered bringing on an MBA intern. Other Tuck students have gotten around this issue by appealing to employers using matching stipend grants from Tuck, through programs like the Maynard Entrepreneurial Internship Program (for internships at startups) and Tuck GIVES (for nonprofit internships). Moll recalled wondering why there wasn’t a similar program for real estate. Then he set about building the Tuck Real Estate Internship Program.

In typical Tuck fashion, it was a team effort. Help came from Tuck’s Development and Alumni Services Office, the CDO, adjunct professor John Vogel, and Cyril Courbage T’96, who generously funded the first year of the program. Moll was the first recipient of the grant. He worked with Atlas for the summer and continued to work with them throughout his remaining time at Tuck.  He is now spinning off his own real estate investment platform in Boston, Arx Urban Capital, with their backing. “I’ve been able to have these opportunities because of Tuck’s network and resources,” Moll said. Based on the success of the program, Courbage and Todd Liker T'00 are funding two more real estate internships this summer.

Moll’s firm will focus on value investing in generational, urban real estate assets. Rather than working on large institutional deals, as he did after college at JP Morgan’s real estate private equity group, Moll is seeking mid-market opportunities beneath the institutional threshold and will use technology and crowd-funding to unlock additional value. Moll anticipates that the company will close its first acquisition, a parking-lot in downtown Boston, by the end of July.

At the same time, Moll is maintaining his connection to Tuck. A few members of the Real Estate Club have helped in his company ramp up, critiquing investor presentations and preparing deal memorandums and due diligence. And he recently collaborated with Vogel on an academic journal article about how crowd-funding will impact real estate.

“I came to Tuck to enhance my pre-existing skillset and apply it to something more entrepreneurial,” Moll said. “Because of the support from Tuck, I have been able to pursue my passion.”

Andrew Wong, McKinsey & Company
Andrew Wong played professional baseball in the minor leagues for five years. He had coached around the world, and liked the character-building aspect of teaching a sport. Now he was ready for a different challenge. Caring for his father, who had just suffered a debilitating stroke, was not what he anticipated. Part of that new job meant running his family’s Chinese-American restaurant in his hometown of Milwaukee, Wis. “I hadn’t realized until then the business influence my dad had on me,” Wong said. “That’s when I knew I wanted to learn business in a more formal environment.”

Wong’s goal at Tuck was to secure a consulting job near his family, and he was encouraged along that path by many Tuck alumni, who praised the field as a great way to learn different industries quickly, yet continue the leadership training from business school.

For his summer internship, Wong wanted the opportunity to work at a big corporation. He landed a position at Hasbro, working on the Nerf brand. “It was a great way to learn brand management, see the culture inside a big company, cement skills from my classes, and get experience seeing a business at all stages of the value chain,” he said.

When he returned to Tuck, consulting was still on Wong’s mind, and he put to use the mock interviews and advice he got during his first year. He contacted alumni at McKinsey and polished his personal narrative for the on-campus interviews. “One thing that stood out with McKinsey is they really cared a lot about me as a person,” he said. “It convinced me they were they the kind of people I want to be surrounded by on a daily basis.”

Wong accepted a position with McKinsey in Chicago. “It was what I had hoped for since I wrote my application to Tuck,” he said. And he plans to coach baseball there too.