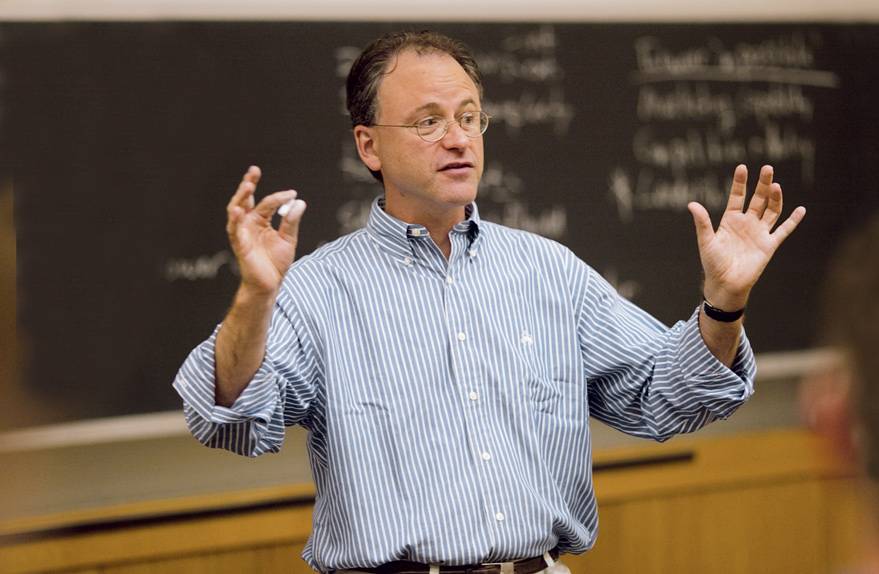 "What were they thinking?" is an irresistible thing to say when someone makes a big mistake. And it's a question that Sydney Finkelstein, Steven Roth Professor of Management, spent a lot of time asking while researching his latest book, Think Again: Why Good Leaders Make Bad Decisions and How to Keep It From Happening to You (Harvard Business School Press, 2009).

"Like any good human, I find it a lot easier to look at other people's faults than my own," he jokes, acknowledging the appeal of using hindsight on someone else. But decisions, he says, are the lifeblood of action for organizations and individuals, and there is much to be learned from others' mistakes.

Along with coauthors Jo Whitehead and Andrew Campbell, directors at the Londonbased Ashridge Strategic Management Centre, Finkelstein looked at 83 cases of high-profile acts of poor judgment in the political, business, and military worlds. How could Department of Homeland Security official Matthew Broderick fail to see that Hurricane Katrina was a catastrophe? Why did Lehman Brothers CEO Dick Fuld spurn corporate suitors and instead watch the venerable firm go broke? In about half the book's cases, people agreed to talk to the authors directly. Many, Finkelstein notes, seemed happy to get things off their chest. "They wanted me to know that they had reasons for what they did," he says. "Sometimes they acknowledged they were personally responsible, and other times that they felt threatened."

Finkelstein's past research focused on decision making, senior leadership, and how teams operate in large organizations. Think Again is a natural follow-up to his Why Smart Executives Fail (Portfolio, 2003), which looks at how entire organizations fall apart. The Think Again approach, which relied largely on interviews rather than academic tools like objective surveys, was particularly well suited to the complexity and nuances of decision making. "Most academic researchers tend to look at a large number of cases to find general trends," says Finkelstein. "I wasn't interested in that. I think interviews allow you to look eyeball to eyeball with people and really understand what was going on.

Through the lens of these interviews, Think Again looks at two processes involved in making judgments: pattern recognition and emotional tagging. The brain always relies on previous experience in judging current situations, looking for similar patterns from the past. But that experience can be misleading. For example, in August 2008 Lehman Brothers was in big trouble, like many other financial-services firms. CEO Dick Fuld refused to sell, believing he could ride it out. "If you go back and look at his history at Lehman, he had made it work in other crises, such as the Long-Term Capital Management crisis in 1998–99." That crisis, Finkelstein points out, was much less serious than what the company faced this time. "This time it's a classic example of misleading experiences, where he had experience that made him think he could solve the problem. And that ended up, in part, costing him the company.

In emotional tagging, another crucial process, the brain "tags" every experience as positive or negative and uses that information when evaluating choices. Referring to research in neuroscience and cognitive psychology, the authors looked at how emotions seem to direct the decision-making process, even before we are aware of them. This process allows people to make efficient choices every day, but it can also be faulty. One case examines Wang Labs, which became one of the most successful computer companies in the world after it launched its word processor in 1976. Its founder, An Wang, was reluctant to develop a personal electronic computer, declaring, "The PC is the stupidest thing I ever heard of." He was driven by strong emotions, namely, his attachment to the word processor and his bitterness toward rival IBM, which he didn't want to emulate.

While Think Again focuses on cautionary tales, it also suggests how to reduce our vulnerability, identifying four red-flag conditions that can lead to errors of judgment: misleading experiences, misleading prejudgments, inappropriate selfinterests, and inappropriate attachments. As the Wang case shows, changing your mind is not easy. "You have to set up an environmental culture in which there are other people who can provide an alternative point of view," Finkelstein says. "One of the safeguards is to ensure that you have the right people around the table.

The current economic crisis gives daily examples of corporate victims of bad decisions. But the insight is just as applicable to personal decisions. "It's not just about Fortune 500 CEOs," Finkelstein says. "As a researcher, a professor, what I care about most is helping people think differently and, hopefully, in a better way about their lives and organizations."