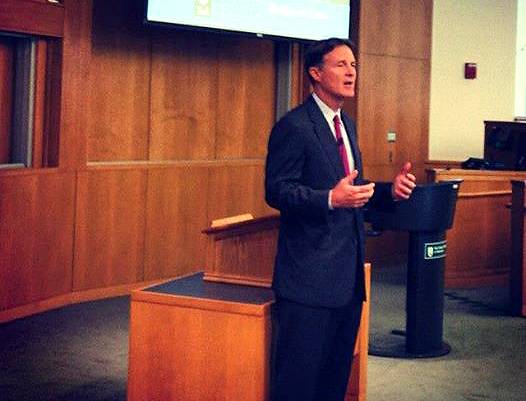 During his tenure as a U.S. senator, Evan Bayh made it a point every month to visit injured soldiers recovering at Walter Reed Army Medical Center. On one such visit, he met a 21-year-old sergeant from Georgia who had lost both legs and one arm when an IED destroyed his vehicle in Iraq. The soldier and his wife—they had gotten married three weeks before his deployment—received Bayh graciously. The politician, however, found himself at a loss for words.

“I walked outside and wept. All I could think of was, ‘Look at what this man has sacrificed for America. What are we prepared to give? Can we not for a moment just lay aside our partisanship for the sake of moving this country forward?’” Bayh said. “We need to keep that in mind to overcome how stagnant our political process has become. Shame on all of us if we’re not able to do that.”

A two-time governor and two-time senator from Indiana, Bayh discussed the need for consensus-building across party lines in his Oct. 2 Tuck talk, “Back to Business: Sustaining American Prosperity through Bipartisanship,” part of the Center for Global Business and Government (CGBG)’s Killingstad Global Insights Series. (In addition to this talk, he also spoke in CGBG senior fellow and former governor of New Hampshire John Lynch’s course, “The CEO Experience,” and attended a small group lunch with Tuck students.)

“People look at our government today and it’s just stuck. The U.S. Senate used to be called the world’s great deliberative body, but now there are bills that, if they came up for a vote, they’d pass 98 to 2 but they don’t even get voted on anymore because of the lack of cooperation,” he said. “What’s going on? And how can we promote greater bipartisanship and progress in this environment that we’ve got?

“Compromise is no longer viewed as an act of statesmanship; it’s viewed as an act of betrayal,” he continued, describing how parties now frame disagreements using inflammatory hyperbole that fosters further division. Accordingly, the public’s confidence has been shaken in not just the government’s ability to act in the face of widespread economic and security-related woes but also in the future of America itself.

“For the first time, the majority of Americans, when asked the question, ‘Do you think your children and grandchildren will have a better standard of living than you did?’ a majority say no,” he said. “That wasn’t even the case back when President Carter gave his then-famous malaise speech.”

Getting our citizens to think of themselves as Americans first, Bayh suggested, rather than as members of a party or adherents to a particular ideology, is the key to ending the demonization and deadlock that have poisoned and strangled our country’s political progress. He called for a return to the compromises great American leaders have made throughout history for the good of the nation, from the Founding Fathers hammering out a Constitution to conservative President Ronald Reagan and liberal Speaker of the House Tip O’Neill working together to save Social Security in 1983.

When Bayh drew parallels between the concept of bipartisanship in both the political and business worlds, he hit a nerve with many attendees.

“It raised questions for us Tuck students as future leaders as to how to strike an ideal balance between conviction and compromise, especially when, in times of crisis, building a consensus can be such a challenge,” says class president John Wheelock T’15, who introduced Bayh. “He sparked a thoughtful discussion of the ethical obligations every leader faces, one we won’t soon forget.”

Bayh closed his discussion with an anecdote from his early career, when he clerked for a federal judge in Indianapolis. At each swearing-in ceremony for new American citizens, the judge would describe how the oath they were about to take was not an oath of allegiance to a political party, ethnic group, or geographical area, but to an idea—the American dream.

“I’ll always remember him saying that. And if we focus on that American dream we all share, if we focus on the sacrifice that those have made to bring us to this place, then I am highly confident that we will transcend our temporary moment of dysfunction,” he said. “Once again we can live out the full meaning of our creed which, as everyone in the room knows, is, one nation—not many, one—under God, indivisible, with liberty and justice for all.”