Making an Economic Difference in the Middle East

Mara Rudman D’84 discussed the power of public-private partnerships in the Middle East. 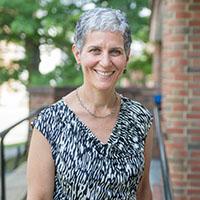 On Bill Clinton’s last day as president, Mara Rudman D’84, the National Security Council chief of staff, sat with him in the Oval Office, crying. Surrounded by moving boxes, Clinton was making his final phone calls as president to Israeli Prime Minister Ehud Barak and Palestine’s President Yassar Arafat to discuss potential post-Clinton parameters for resolution in that fraught region.

“President Clinton saw that my eyes were filled with tears and said, ‘Hundreds of people are likely to die because these leaders haven’t been able to move forward with what’s been laid down. If we’re lucky, 10 to 20 years from now, people will come back to the same set of facts and offer these same parameters,’” Rudman recalled. “Unfortunately, many hundreds of people have died since then, only for us to come back to the same place.”

The founder of the international strategic consulting firm Quorum Strategies and the former Assistant Administrator for the Middle East at the U.S. Agency for International Development (USAID), Rudman described several subsequent attempts—some more successful than others—to help ease tension in the area in her Feb. 20 talk, “Doing Well, Doing Good, Doing it Right: Can it Happen in the Middle East Today?”

Public-private partnerships are key, said Rudman, at Tuck as part of the Center for Global Business and Government’s Killingstad Global Insights Series. She described how Cisco Systems, Inc. has helped transform the West Bank by boosting the Palestinian information and communications technology (ICT) sector. The idea was the brainchild of an employee at Cisco Israel, who helped convince the company to invest $15 million to partner with three West Bank IT firms to develop a professional mentorship program and to enact youth training and school networking initiatives. Cisco’s success has inspired many others to follow suit, she added.

“By following Cisco’s example, the statistics in the area have become quite impressive: there’s been a 64-percent increase in international client work among Palestinian ICT firms and a 20-percent increase in local students applying for engineering and computer science schools,” Rudman said. “These firms also have much higher averages of employing women and providing more flexibility with work hours.”

Even when governmental and private sector interests align, however, the end result is not guaranteed to succeed, she cautioned. A project first conceptualized by Bill Clinton in 2005, Palestinian Political Risk Insurance (PPRI) launched in its current form eight months ago with the goal of insuring Palestinian exports from losses resulting from political violence, trade disruption, and movement and access issues.

Supported by Presidents Clinton, Bush, and Obama as well as by USAID and OPEC, PPRI’s progress was stymied by the troubled dynamics between Israeli and Palestinian players, even though its success was in the interests of both nations.

“To quote Bill Clinton, there have been ‘Palestinians, Americans, Europeans, Israelis, insurance experts, businesspeople, lawyers, financial senior specialists, [and] regional specialists’ working on this for long periods of time, but it’s not at all clear that it’s going to come together,” Rudman said. “Everything in this indicates that it should have worked, and yet I think it’s probably not going to.”

Ending her talk with a success story, Rudman described how the political troubles in Egypt had an unexpected effect on life in the West Bank. A company out of Hebron that manufactured French fries was no longer able to get their imported Egyptian potatoes. For very little money, USAID was able to train West Bank farmers and help supply them with the most suitable potatoes, and then to help connect them with a local manufacturer who could export their goods. “It’s a great example of a partnership that works with something seemingly as simple as farming and potatoes, but actually took a lot of ingenuity and creativity,” she said.