With increased funding and five-year tours of duty winding down, an increasing number of military personnel are turning to Tuck to hone their civilian leadership skills. 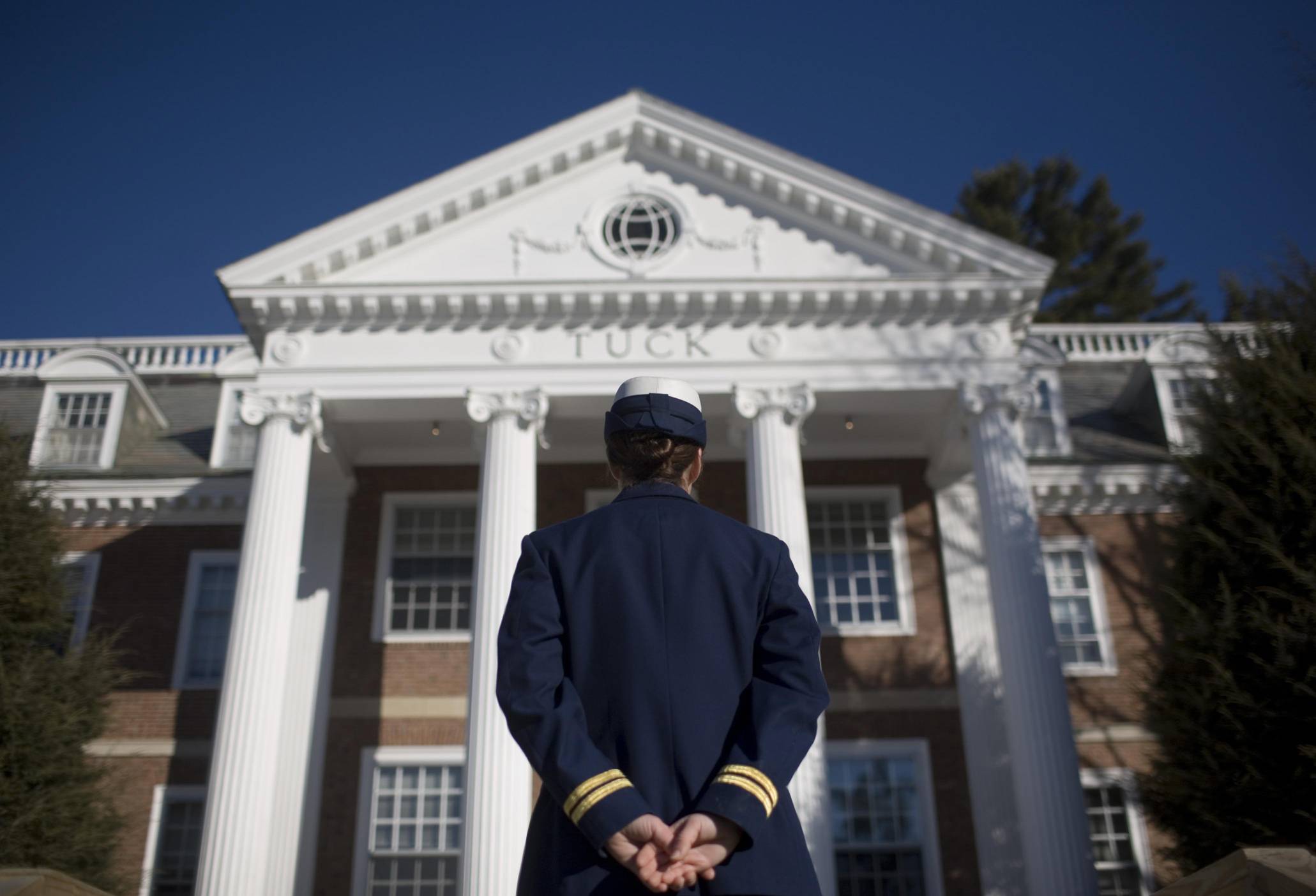 Before coming to Tuck, Amy Florentino T'10 captained the 175-foot-long Coast Guard cutter Katherine Walker, the biggest active military ship in New York Harbor. In a position that had her away from home port for up to three weeks at a time and on the water an average of 180 days a year, Florentino was the most senior person aboard.

Despite the responsibility—the U.S. Coast Guard Academy graduate was in charge of waterway management and port security—Florentino believed her inventory of management skills wasn't yet complete. She describes this dichotomy as not seeing the forest for the trees. "I wanted to learn more about how to operate in a way that is global and strategic rather than just tactical," she says.

Florentino's story is not unique. "Going back approximately 30 years, about three to four percent of Tuck students have had a military background," says Tuck enrollment manager Bill Brown T'78. And this percentage is expected to rise. Brown, a graduate of the U.S. Naval Academy and former nuclear submarine officer, anticipates that leaders from the U.S. armed forces will increasingly be seeking admission to business schools across the country.

Scores of leaders presently stationed in regions such as Iraq and Afghanistan are about to finish up standard five-year tours of duty. Many will be looking to enter the professional world. "I have people calling me from Baghdad telling me they are studying for the GMATs," Brown says. "More and more military leaders are beginning to show up at our door.

New money is also available to those in the U.S. armed forces looking to pursue higher education. In 2008, the new GI Bill significantly increased the amount of funds available to those in the military seeking educational training. Even those who do not wish to leave the military will likely be a part of the growing applicant pool. "The military doesn't hire from the outside. If they want their leaders to have extra education, they have to send them to a school like Tuck," explains Brown.

Those who arrive at Tuck from the armed forces have captained large ships, put boots on the ground in unstable foreign territories, taken covert teams behind enemy lines, and negotiated with town elders to gather intelligence or improve local businesses and living conditions. These aren't standard résumé items. However, their experience in the area of leadership has proven to be a benefit both in the classroom and, after they graduate, in the corporate world.

"Not always, but frequently, those who come here from the military have more leadership experience than other Tuck students," says Betsy Winslow, director of the Cohen Leadership Development Program, an initiative tightly linked to the core curriculum that ensures Tuck graduates are prepared to lead. "And that leadership experience is gained in very different contexts —in situations where perhaps the consequences of an error could be life threatening.

Kevin Williams T'10 was a Navy SEAL with seven deployments prior to his entering Tuck. While in the military, he had to make critical connections with civilians in Yemen, Afghanistan, Iraq, and Thailand."It was important to quickly understand and demonstrate respect for their value systems in order to build the type of trust necessary to complete our mission," says Williams. "Working closely with such a diverse group of people in such ambiguous environments instills a type of confidence that leads you to believe you can develop strong relationships with virtually anyone.

Brown has noticed that an increasing number of prospective students are not coming straight out of combat. They've been involved instead in nation building, which he says may be an even more valuable leadership experience. "These people have acted almost like the mayor of a small town or region where they've had to mediate conflicts," he says. "They've come to understand what it takes for their sector to be stable, and they have a tremendous amount of experience in small-scale governance," he says. It's precisely this kind of experience that, when infused with the varied backgrounds of others entering Tuck, adds value.

Rebecca Joffrey T'97, co-director of Tuck's Career Development Office, knows just how these skills translate professionally. "The question of whether these types of candidates can lead is already proven," she says. And within eight to 10 years, she notes, someone of this caliber can lead a business unit at a multinational corporation. Forward-thinking employers know this. "These are people who are going to become division heads," adds Brown. "They've had lots of experience managing large groups of people.

Of course, as with nonmilitary students, those with military experience come to Tuck for a variety of reasons. Some require professional development in other areas. "Our military guys sometimes have a harder time getting the quantitative part," says Brown. "If you've been out in the military, and you haven't been pushing numbers around, you may be relatively weak in this area," he notes. But that changes over time. Williams admits that when it came to cash flow, he relied heavily on others in his study group until he got up to speed. "I'm not going to be teaching accounting," he says, "but now I'm not dragging anyone down either.

Hans Brechbühl, executive director of Tuck's Center for Digital Strategies, ran a border camp in a cavalry unit patrolling the Iron Curtain between Germany and Czechoslovakia during the Cold War. "I was 24 years old and it was the type of thing that, if you screwed up, would be on the president's desk the next morning," says Brechbühl, who is also associated with the Armed Forces Alumni Association at Tuck. "Having responsibilities like that at an early age is what the military is all about."