Firms innovate for developing countries and then export to the West.

By innovating for poor countries, rich-world multinationals can grow abroad and at home, argue professors Vijay Govindarajan and Chris Trimble in their book Reverse Innovation. 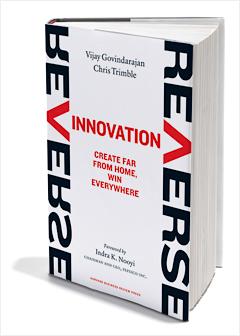 California-based Logitech had a winning strategy for selling wireless computer mice in China—until an unheralded Chinese company called Rapoo began selling mice at one-third the cost. Within six months Logitech responded by designing a mouse that had less memory and simpler software but could still perform the functions most consumers wanted—and cut its entry-level price from $50 to $19.99, nearly the same as Rapoo’s. The redesign went global, and within a year Logitech had shipped 4.5 million units.

The migration of such innovations from poor to rich countries has been rare over the course of history, Tuck faculty members Vijay Govindarajan and Chris Trimble T’96 explain in their new book, Reverse Innovation. Consumers in wealthy countries traditionally demand the most advanced technologies, and eventually those innovations trickle down to the poor. Now, with the rise of Chinese, Indian, and other developing-country multinationals, disruptive innovations from the developing world are migrating to the U.S. and Europe much more rapidly—and pose an existential threat to developed-country multinationals.

Logitech’s successful response to Rapoo—and the redesigned mouse’s spread across the globe—is just one example of reverse innovation, but it holds lessons for companies in numerous industries. “If America wants to be a strong country in 20 years, we have to be curious about the problems of poor customers as well as rich customers,” says Govindarajan, the Earl C. Daum 1924 Professor of International Business. “You can’t ignore them anymore because the opportunity cost is huge. The Tatas and the Mahindras are smart, savvy companies, and they’re going to come after you.”

As firms from developing countries increasingly step onto the world stage, rich-world multinationals will have to fend them off, not only in the U.S. and Europe but in developing markets as well. That means innovating in ways that take into account the infrastructure, regulatory, and sustainability gaps in the developing world—as well as cultural differences and the willingness of poorer consumers to sacrifice some performance for a better price.

Too often, Western companies make the same kind of mistake that GE Healthcare did in China. Since the 1980s, the company had been trying to sell its premium-priced ultrasound scanners, with little success. GE’s strategy was to depend on what Govindarajan and Trimble call glocalization—a classic export strategy of taking an existing product from a home market and selling it in the developing world with slight modifications. After a decade in the market, GE’s ultrasound sales were a paltry $5 million. The scanners were competitive at the very top of the market in China, but 90 percent of hospitals couldn’t afford them.

In response, the company decided to create an independent team in China to develop a scanner just for the domestic market. The team came up with a $15,000 handheld scanner—just 15 percent of the cost of the company’s previous low-end ultrasound. Performance was not as good, but that was outweighed by the portability, ease of use, and low price in a market where most of the population is served by low-tech, low-budget rural hospitals and clinics.

After the new scanner’s introduction, GE’s ultrasound sales in the country rose from $5 million  in 2002 to $278 million by 2008. Today GE sells the portable scanners in the U.S. and other developed countries for use in ambulances and operating rooms—where a market never previously existed because traditional scanners were too big.

The genesis of the book came during Govindarajan’s stint as professor in residence and chief innovation consultant at GE from 2008 to 2009. GE CEO Jeffrey Immelt D’78 sent Govindarajan to Asia to help the company learn how to grow market share for its energy and medical divisions in the developing world. Govindarajan saw that the company hadn’t adapted as many of the lessons of the Chinese ultrasound experience as it could have.

“Where they were participating, they were just selling to customers who looked like the U.S., the top 10 percent of society,” he says. “The 90 percent also get heart attacks and cancer. But there was no product for them.” That’s a recipe for the success of Chinese companies like Rapoo, which can innovate for the mass market in developing countries—and then export those innovations to the West. To succeed, Govindarajan and Trimble argue, Western multinationals must beat them at their own game.