The Evolution of Reputation

Professors from Tuck and Dartmouth apply an evolutionary biology model to corporate reputation. 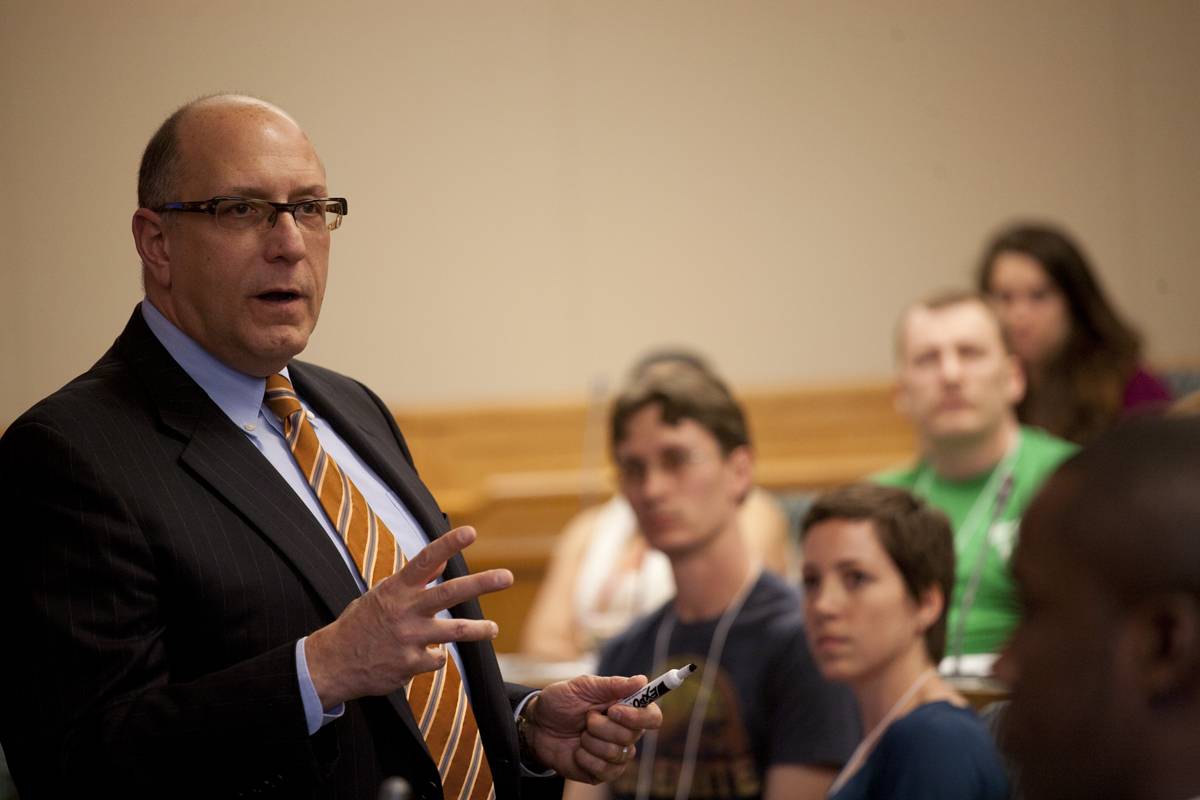 Professors from Tuck and Dartmouth team up to apply an evolutionary biology model to corporate reputation.

A lioness on the hunt is a wonder to behold. Slinking through the tall grass of the savannah, she patiently stalks her unwitting prey until the moment is exactly right. Then she sprints at up to 30 miles-per-hour for 100 yards and clamps down on the neck of the lesser beast, securing the calories that will keep her and her pride alive for a few more days. Her cunning, her speed, her strength—they seem almost magical, and maybe they are, but they are also traits that are the result of natural selection, something that evolutionary biologists track and measure.

Ryan Calsbeek, an associate professor at Dartmouth, is one such evolutionary biologist, but he studies lizards and frogs instead of lions. He plots their traits on a three-dimensional graph he calls the “Adaptive Landscape,” where the peaks and valleys represent areas of high and low fitness. By studying those strengths and weaknesses, Calsbeek can predict how a given population in a given landscape will evolve over time.

A few years ago, Calsbeek met Paul Argenti, professor of corporate communication at Tuck, and they began talking about one of Argenti’s research areas: corporate reputation. Argenti was lamenting the lack of a model to reliably measure reputation. It struck Calsbeek that if they replaced “reputation” with “fitness,” the two professors were essentially asking the same question: which traits would guarantee survival? In animals, the traits might be body size or running speed, while in the realm of reputation they are things like customer satisfaction and employee engagement. “And that was kind of the moment where we both went, Wow, we should have a meeting of the minds here,” Calsbeek said.

Reputation is the feeling people get when they think about you. Do people like you? Do they trust you? It’s human to want to be liked, so advice on reputation has been around for a long time. Socrates, for example, said that if you want to have a good reputation, you should “endeavor to be what you desire to appear.” In the business world, reputation is the corollary of brand. “A company creates a brand, and earns a reputation,” Argenti said. In that sense, corporate reputation is a valuable intangible asset that’s defined by the opinions of a company’s stakeholders, including employees, shareholders, customers, communities, regulators, and suppliers. That reputation can be worth many multiples of a firm’s hard assets, as in the case of Coca-Cola, whose total brand value of more than $70 billion dwarfs the $6 billion its assets are worth.

The first attempt to measure and rank corporate reputation was the Fortune Most Admired list, which debuted in the early 1980s and still commands a lot of respect from CEOs today. The top-ranked company in 2015, using a set of nine key attributes—innovation, people management, use of corporate assets, social responsibility, quality of management, financial soundness, long-term investment value, quality of products/services, and global competitiveness—was Apple, Inc. No. 2 was Google. The problem with this list, Argenti said, is that admiration is not the same as reputation, and it’s unclear if efforts to get on the list—or move up it—will be beneficial for a particular company.

Other attempts at more precision have come since the Most Admired list, and they’ve been getting closer to a holistic understanding of reputation. In 1996, NYU emeritus management professor Charles Fombrun published “Reputation,” the first academic book on the subject. That led to Fombrun’s formation (with others) of the Reputation Institute, which today puts out the RepTrak, another form of reputation measurement. And every year, Interbrand publishes its Brand Value ranking. Like the Most Admired list, Brand Value is a proxy for reputation, and therefore an imperfect measure.

The biggest weakness of all these different measurements, according to Argenti, is that they look backward in time, ranking firms based on what they did in the previous year. They give no guidance on how to influence reputation in the future. “We wanted to build something more outcomes-based,” he said. By that he means “predictive”—so a company could know with relative certainty how its reputation would be affected by, say, focusing more on customer satisfaction or community engagement. “If you’re running a marketing and communications function,” he said, “you want to be able to figure out with something other than dumb luck where to put your resources.”

This is where Calsbeek’s expertise comes in. Calsbeek and his wife Brittny, a lecturer of biological sciences at Dartmouth and an expert in genomics, have been working together for years on their Adaptive Landscape model, using mathematical models adopted from the study of facial recognition and human genome analysis to predict natural selection. Together with Argenti, they are creating a similar model for reputation, called the Corporate Adaptive Landscape.

Their first step was to find truly rich data sets that explain all sorts of variations among reputations. In the beginning, they examined four years of proprietary data, and used it to test the first version of their mathematical model. The results were promising, and now the researchers are focusing on the variables that influence reputation, their consistency through time, and how they interact with each other. This more fine-grained work has been informed recently by a robust data set from a Fortune 500 company that has been measuring reputation in 39 countries. “We’re really just starting to get under the hood,” Ryan Calsbeek said, “and it’s a richer view of reputation. Within a given data set we will be able to establish criteria that influence reputation in meaningful ways.”

Like its evolutionary brother, the Corporate Adaptive Landscape is a quantitative measurement of fitness in an environment, and given the right data it can answer many questions firms are asking internally. For example, it can identify the key traits that drive changes in reputation through time, the traits that matter in different countries, and the amount to invest in specific areas to achieve maximum fitness against competitors. And as they refine their model, the researchers will be able to discern even more. “What we’re finding is that there are inflection points where you can invest in one constituency to the detriment of another,” Ryan Calsbeek said. “And there are some variables that appear to have little impact, but when they interact with another variable, they have some non-linear effect.”

This type of work has never been done before in corporate reputation, and if the predictions prove reliable, the model could become an important tool in firms’ quest to improve and fine-tune their reputation and brand value. “The goal for us is to keep trying to push the frontiers on the research,” Argenti said. “It’s one of the great research questions people have been asking for years, and it will have huge implications for how companies manage their brands and develop a strong reputation.”

Just like lions and lizards, we are all subject to the forces of natural selection. One day soon, firms may be able to control their destinies in ways plants and animals can’t.