Matthew J. Slaughter, the 10th dean of Tuck, is seeking to expand the school’s leadership role in furthering business as a force for good in the world.

Matthew J. Slaughter, the 10th dean of Tuck, is seeking to expand the school’s leadership role in furthering business as a force for good in the world.

Late on a Monday afternoon three weeks into the first academic term of his deanship, Matthew J. Slaughter is going strong. The new dean of the Tuck School of Business at Dartmouth has recently finished teaching a class of high-level executives in Tuck Executive Education’s Global Leadership 2030 program and the exchange of ideas seems to have stoked his characteristic high energy. When our conversation turns to the role of business in an increasingly global economy, though, his enthusiasm rises to another pitch.

“What is remarkable over the 20th century in particular is how market forces have been the primary driver of increasing standard of living and jobs and opportunity for literally billions of people on the planet,” he says, “especially more recently with the accession into the global economy of both India and China.”

This is a favorite topic of Slaughter, a globalist who seeks to expand Tuck’s leadership role in furthering business as a force for good in the world. He continues in animated tones, with a baseline of scholarly reserve. After all, this is no ideological performance; Slaughter, a registered political independent, is simply describing trends that his research has documented over the last 20 years, and how they relate to the institution he’s served throughout his professional life.

The world is yearning for wise and effective business leaders, he says, and Tuck is uniquely suited to develop them. “We’ve been very fortunate with the strengths of Tuck over the years. We already have a number of inspiring graduates around the world who are doing well by doing good,” Slaughter says. “I’m very excited and honored by the prospect of continuing that at Tuck.”

“As wonderful as Tuck is today, we as an institution cannot be complacent, and I did not assume this new role to be complacent. Our obligation is to strengthen the Tuck School, to engage with whatever the world brings next.” Matthew J. Slaughter

Matt Slaughter is a slender 46-year-old, with a boyish face and a warm and inviting smile. He became a Dartmouth professor at 25 and was named to the White House’s Council of Economic Advisers at 35.

Slaughter, who has been at Dartmouth since 1994 and at Tuck since 2002, was chosen to replace former Dean Paul Danos after an exhaustive worldwide search. He’s a leader whose first instinct is to listen, an internationalist with small-town roots in the American Midwest. Above all, he is a person grounded in community.

The youngest of three boys, Slaughter grew up in Minnetonka, Minnesota, a suburb of the Twin Cities. His father was a sales executive at a metals wholesaler and his mother, who had worked as a nurse, ran a home often overflowing with guests.

“Our family life was very active and vibrant, our home a welcoming destination for lots of family and friends,” says Slaughter, who maintains close ties with a diverse group of those public high school friends. About half the group settled in Minnesota, while the careers of others have taken them to various parts of the United States and the world. Though no one planned it that way, the group has come together for an informal reunion each of the last 29 years.

“Having that dynamism and variety among our friends reinforces what we academics should be aspiring to be, which is make sure our students are connecting with the real world,” he says. The group now gathers each summer in northern Minnesota, a region known for its stark beauty yet an economy scarred by the decline of the local mining industry. That, too, keeps Slaughter grounded.

“A lot of my research and policy work has been on how we reconcile the reality that globalization, which is very good for the world on average, doesn’t benefit every single worker, firm, and community,” he says. 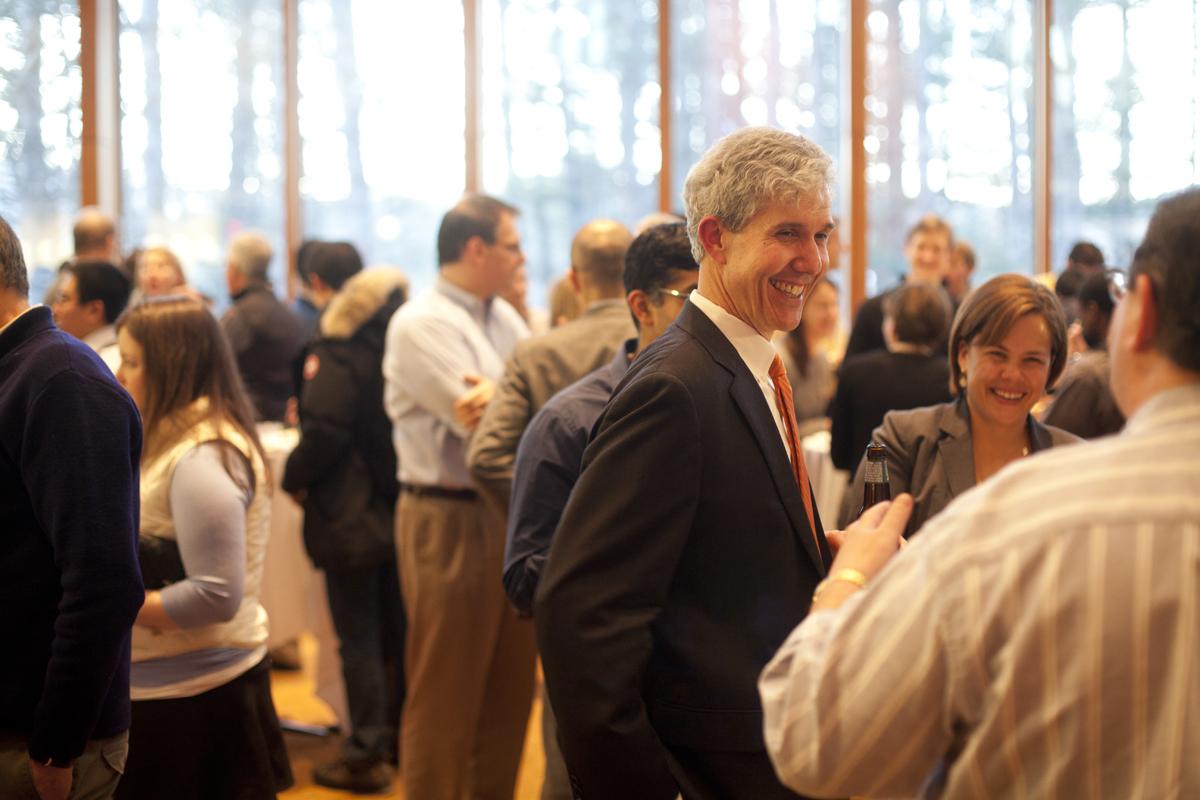 In northern Minnesota, as in many other parts of the world, there’s a sense of ambivalence toward business. For that to change, and for business to fully deliver on its potential to make the world a better place, Slaughter believes the world needs business leaders who are not only skilled, but also wise and empathetic. “I see this as an amazing opportunity for Tuck, because we have established ourselves as a school that takes values and integrity very seriously. We can articulate that even more clearly in the future and have even stronger offerings in and out of the classroom that prepare people to be the kind of leaders that the world is yearning for today.”

Historically, Tuck has been more intentional than other schools in training what Slaughter calls leaders of wisdom—a term that encompasses not only technical skills, but also ethical orientation and humility about learning. Tuck has a proud tradition of producing such leaders, and their success attracts students who want to follow that path.

Developing such leaders is a central component of Slaughter’s emerging vision for Tuck, which he has been crafting through an inclusive process grounded in conversations with Tuck faculty, students, and alumni, as well as leaders in the broader world. “Central to Tuck is our community—our space and our values,” Slaughter explains. “Tuck is a school, but that word alone does not capture the vibrancy of the people here.” Though Tuck’s size and location are often framed as challenges to an institution that aspires to be the best business school in the world, Slaughter prefers to focus on the unique advantage they confer. 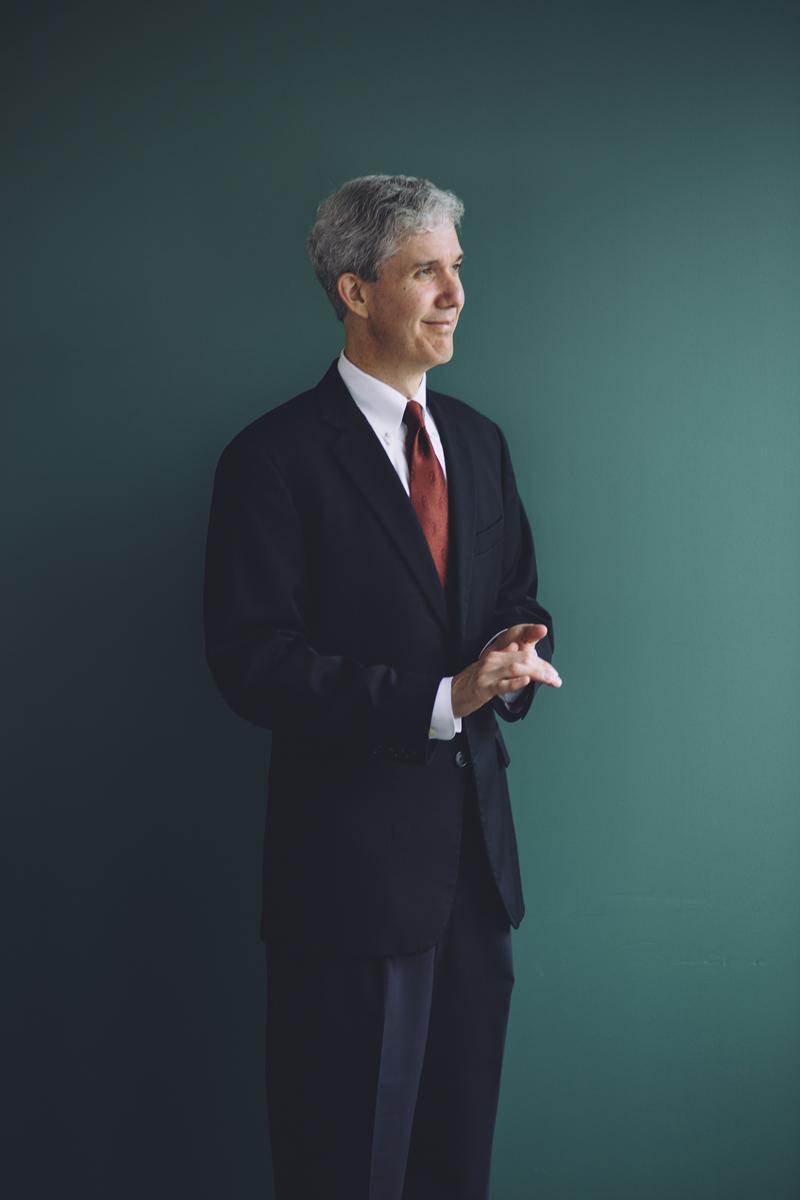 “Hanover is this lovely picture-postcard New England town, and yet when many people think of global business education they think of a global metropolis like London or Shanghai or New York. Our answer to that is that paradoxically, our community allows students to engage with the diversity and dynamism of the global economy in a richer way,” he says. “One of the reasons for that, among many, is that the sense of trust and support among students and faculty and staff is really unique.”

As an example, Slaughter cites a popular elective course he taught, Leadership in the Global Economy. “It’s meant to be a really electrifying, engaging free-for-all,” Slaughter says of the class, which he organized around mock congressional hearings. “The students really push and probe and challenge each other. That intellectual risk-taking is supported by the relatively small scale at Tuck, where students can build a sense of trust among their classmates and faculty and staff that allows them to really stretch themselves and thus enrich their learning.”

Slaughter has found another favorite subject and his voice rises to a new pitch of enthusiasm. “When you’re teaching and you grasp that students have connected with an idea, and really understand it for the first time—as teachers it’s one of the most rewarding things that we do,” he says. Even in the frenetic first weeks of his deanship, Slaughter took an afternoon to teach in Global Leadership 2030 program for senior executives. The course includes week-long modules in Hanover, Chennai, and Shanghai, with an emphasis on experiential learning. Most of the time in India and China is spent visiting local entrepreneurs, civil-society leaders, and executives of large multinationals. The program has helped Slaughter to better understand the global environment, and he wants to ensure that Tuck students have the opportunity to learn in the same way.

“As terrific as the learning community is here on the Tuck campus in Hanover, we are increasingly taking our students physically and metaphorically around the world to learn first-hand what it is to be a leader in the global economy,” he says. The 2017 cohort, entering Tuck this fall term, is the first to have a degree requirement called TuckGO, in which every student will take at least one of a suite of immersive global courses that will put them on the ground in a country that is new to them.

“When many people think of global business education they think of a global metropolis like London or Shanghai or New York. Our answer to that is that paradoxically, our community and our physical space allow students to engage with the diversity and dynamism of the global economy in a richer way.” Matthew J. Slaughter

Slaughter is the 10th dean in the Tuck School’s 115-year history. His predecessor, Paul Danos, served for 20 years, expanding the full-time faculty from 34 to 55 members and filling the stable with influential thought-leaders, Slaughter among them. He built world-class residence and lecture halls, increased enrollment by one-third and quintupled the endowment. It’s fair to say that Danos, who brought Slaughter to Tuck and mentored him, is the proverbial tough act to follow.

“I can’t tell you the amount I’ve learned from Paul about Tuck, and about business schools and higher education more generally,” Slaughter says. “But perhaps most importantly, Paul taught me about being a leader with the utmost integrity and dedication to the institution that you’re serving.”

As he begins his stewardship of one of the world’s great business schools, Slaughter acknowledges the gravity of responsibility that comes with the position. Still, it’s a weight he doesn’t bear alone; he has the Tuck community to rely on. “The support I have received from alumni, faculty, staff colleagues, and our students has been really remarkable and humbling,” he says.

On Slaughter’s watch, Tuck will remain rooted in that community and its values, and will grow with its traditional strengths. “In no way do I think the new vision for the Tuck School will be a radical departure. When I think about Tuck in the future, we will continue to innovate as we have over the first 115 years. How exactly we meet our vision of being globally connected, diverse, and aspirational—how exactly we do that in the future will continue to evolve as it always has,” he says.

The creation of the Tuck School in 1900—the world’s first graduate school of business—was itself a fundamental innovation in higher education. It arose because Edward Tuck recognized a dearth of trained managers in an emerging market called the United States, and asked his old college roommate, Dartmouth President William Jewett Tucker, to help him create the new program at their alma mater.

“Today we still adhere to the principles and values that Edward Tuck spelled out in his letters to president Tucker, particularly an ambition about principled business leaders,” Slaughter says. “We still adhere to that today, but how we do it in 2015 is fundamentally different than the way it was done here in 1900.”

By way of perspective, Slaughter recalls that when Danos started as dean in 1995, he arrived on campus at the same time that Netscape floated its initial public offering. Danos had no way of anticipating what the information technology revolution would do to the world in general, and to higher education and business education in particular. He led and he innovated; Tuck thrived.

As Slaughter began his deanship in July, the Greek Debt Crisis had the Eurozone teetering on the brink. That crisis is now in abeyance, just as a flood of refugees brings immediate and lasting change to European labor markets, and countries representing 40 percent of world GDP have negotiated the largest regional trade pact in history, the Trans-Pacific Partnership.

All of these things bring opportunity and challenge, Slaughter says. “As wonderful as Tuck is today, we as an institution can’t be complacent, and I did not assume this new role to be complacent,” Slaughter says. “Our obligation is to strengthen the Tuck School, to engage with whatever the world brings next.”