Give innovative manufacturing companies a good, hard look. You're working on products that change people's lives for the better, and that's what keeps you coming to work every day. 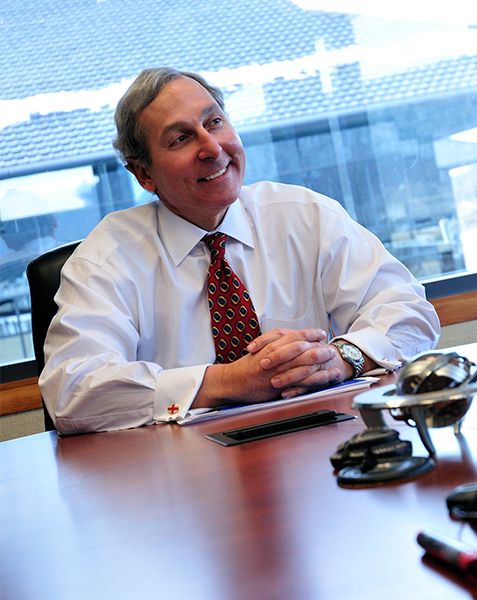 Ask president and chief operating officer Peter Volanakis D'77, T'82 for the high point in his 28-year tenure at Corning and the answer comes like a shot: "Right now."  In the midst of the downturn and just years removed from a near bankruptcy, Corning turned in upwards of $800 million in profits on revenue of more than $1.5 billion in each of the last two quarters. This was due in large part because of two strategies Volanakis spearheaded: globalization and LCD technology. Its next big thing, Gorilla Glass, can already be found on more than 100 million mobile devices.

All of which is why Volanakis figures now is the ideal time to make his exit. At 55, Volanakis says, "I'm not old, but I'm four years older than my boss, the chairman, so as much as I love the company, the future for me here looks a lot like the past." He has yet to script the next scene, but plans to get in lots of hiking, skiing, and biking while thinking it through.

Corning has been his one and only company since Tuck. A summer internship there proved to be a good fit, but with other job offers in hand, he sought advice from Professor J. Brian Quinn. Professor Quinn urged him to pay attention to the warm and fuzzy feeling he had for Corning. "He had it right, the company's values and my own matched," says Volanakis, "and because Corning was involved in so many different industries and products, I knew it was a place I wouldn't easily get bored."

Volanakis worked for 14 or 15 bosses  on early- and middle-stage innovation projects, restructurings, and joint ventures in Corning's environmental, specialty materials, and telecommunications businesses. His defining experience came as head of operations in Germany from1992 to 1995. "I asked the CEO before I left if he had any advice for me, and he said, 'Don't screw up!'" he chuckles. Forced by a deep recession in the automotive industry into managing "significant and painful" restructurings, he moved from being the smart strategist to being the person who had to make things happen. "Having to deliver results in that kind of a situation gives you confidence that as a leader you can face about anything."

Following a stint as Executive Vice President in a Corning/Siemens Telecommunications venture, he came back to lead the LCD division, which would prove to be the company's lifeline when the specter of bankruptcy loomed in 2001. This was when the dotcom and telecom bubbles popped, slashing demand for Corning's fiber optics and photonics products. With Volanakis spearheading Corning's global expansion, company revenues outside of the United States soared from 10 to 75 percent in the last 18 years. In China alone, revenues of $60 million 10 years ago are fast approaching $1 billion. In 2005, Volanakis was appointed COO and president in 2007.

Expect to see his face around Tuck: he and wife Cathy have purchased a retirement home in town. He remains a Tuck Overseer, and he recently joined Dartmouth-Hitchcock's Norris Cotton Cancer Center's Advisory Board. His advice to Tuck grads: Give innovative manufacturing companies a good, hard look. "You're not pushing numbers around. You're working on products that change people's lives for the better, and that's what keeps you coming to work every day."

From a young age, John Casesa T’86, vice president of global strategy at Ford, was drawn to the automobile industry.

Tony Posawatz T’86 is a car guy. The love affair started long before he got his driver’s license—he is from Detroit—but it is still best explained by the independence that four wheels granted him.

Dutch Kuyper T’92 wants to turn Parker Ranch, a 130,000-acre cattle operation and piece of Hawaiian history, into a model of sustainability.