There were some dark, dark days. My first memory of the whole thing is lying flat on my back on the burnt grass of a soccer field, looking down my body and seeing my knee cap on the side of my calf, and my lower leg at a horrific, unnatural angle. The world became a blur. There was a lot of shouting in French, but I couldn't make out any of the words. I let my head fall to the right, my nose touching the pale grass. I clutched my thigh, desperately scrambling to support what was left of my leg. The cool February morning air and bright Texas sunshine somehow felt like Armageddon. I knew this was serious. In the extended aftermath of the ensuing months, there were many long hours spent painfully willing for a single inch of progress in flexion. Sometimes I was so drugged up I couldn't complete a sentence, and the long winter made my small apartment feel like a prison cell. Worst of all, there was the realization that things would never be the same again - not simply different but, no matter how I looked at it, worse.

This was the scenario I found myself in almost exactly half-way through my first year at Tuck. On February 13th, 2011, I dislocated my right knee, tearing my ACL, PCL, MCL and meniscus. I could describe the ordeal in numbers (10 hours under the knife across two surgeries, nine incisions, one cadaver ligament, six months on crutches, more than a year of intensive rehab, 15 degrees permanent loss of flexion, two inches loss of muscle mass above and below my knee, etc.) But that doesn't really capture the full horror of the experience. Silver linings came in the form of damage limitation - the ultra sound scan and nerve tests showed that I would not require amputation, by far my greatest fear while it remained even a remote possibility. But the anguish was worsened by the uncertainty over the extent of my recovery: How bad a limp would I be left with? What physical activity would I be able to return to? How long would it all take? Niebuhr's prayer became my mantra, which I repeated endlessly to myself: "Have serenity to accept the things I cannot change, courage to change the things I can, and wisdom to know the difference."

I was very fortunate to have my wife by my side. Her no-nonsense stoicism kept me from self-pity. And she motivated me to keep going when I was worn out by the miniscule increments of progress achieved by my colossal efforts in rehab. I was also grateful for the Tuck community - people made extra space for me in class, held open doors, carried my lunch and gave me rides anywhere I needed to go; all without me asking. They always cared for and about me, more so than I would have done for them, if I'm honest with myself about it. I was grateful for advances in medical technology - even 15 years ago, I would probably have spent the rest of my life walking with a cane. And I was grateful for inspirational literature, especially "If" by Rudyard Kipling and "Invictus" by William Ernest Henley, which were my solid companions throughout.

My wife thought I was crazy this January when I suggested signing up for the New Jersey Devilman triathlon. I probably was. I still couldn't walk far at all without significant pain, nevermind run. Nor was I able to ride a road bike yet, and I've never been a good swimmer. But there was some determined part of me that trumped the best of my reason. I signed up.

On Saturday, I completed the triathlon. I wasn't fast, but I made it. About half-way through the cycle, I realized I was probably going to do it and a giant wave of emotion came over me. I pulled myself together and, spurred on by adrenaline, found the finish line. One year ago, less than two weeks before my second surgery, I could not have conceived of being in a position to do this before I graduated from Tuck. It was completely off limits. But I did it. The camaraderie among the 36 Tuckies who finished the race would have made it a special day on its own; the circumstances of my recovery made it all the more satisfying. 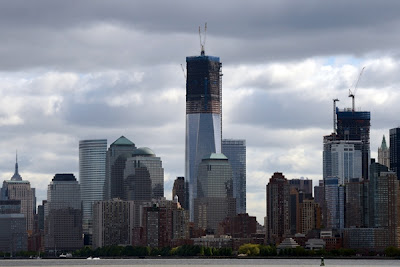 Driving home past Newark Airport and over the George Washington bridge yesterday, looking at the Manhattan skyline, I was so happy to see the Freedom Tower taking shape. Its construction is still underway, but it is now the tallest building in America - it has been a long recovery from a horrific tragedy, but New York is on the mend. In my own small way, I took solace from the grandeur and glory of the new World Trade Center. Whenever I see that building, I will remember the people who helped me with my recovery: my wife, great friends, family, colleagues, medical professionals, and poets. And I will be grateful for the irrepressible nature of the human spirit.

"If you can meet with triumph and disaster, And treat those two imposters just the same."

"I thank whatever gods may be for my unconquerable soul."