The Beginning of the End

It's real. It's actually happening. We T'12s are going to have to graduate and re-enter the real world. Soon.


If you had asked me before spring break when I'd like to start work, I would have said, "tomorrow". Not that I wasn't having a great time at Tuck, but there was a part of me itching to get back out there onto the field and drive forward the next phase of my career. Here we are, six weeks later. Six weeks of ever-growing nostalgia for our time together in this paradise. Six weeks of living the life of a retiree. (I overloaded with classes in the fall, so now have a light schedule. The Economist recently quoted a British elite grandee from Downton Abbey as saying, "What is a weekend?" I know what they mean. Investment bankers might ask the same question, but it would be for a different reason.)

Two days ago, we had our class photo taken. Suddenly, I'm not so ready to start work tomorrow. This whole graduation thing is actually going to happen. They're going to put our photo next to 109 others and we'll be gone.

Only we won't be gone. Tuck is a two-year program, but a lifelong community. After our class photo, I got together with the members of my fall study group (#26: "No Big Deal") for a group shot. These and other deep bonds we've developed over our time here, and the memories we've created, will live on long after we graduate. 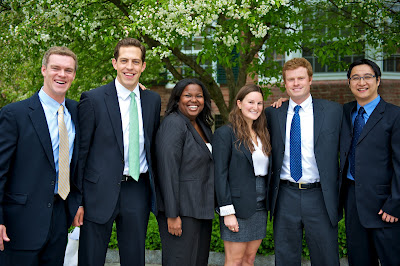 In the next six weeks, we will make many more cherished memories. Frosty Jester was last night and was a big success. In two hours, I'll leave for New Jersey to do the Devilman triathlon. In the next three weeks, there will be lots of golf, dining with friends, Tuck follies, a married vs single guy three-event bonanza and, somewhere between it all, classes. Then, three weeks of dis-orientation, with trips sailing off Newport, staying at Moosilauke, cycling on Cape Cod, and countless other treats. There are many good reasons I'm not ready to start work tomorrow.