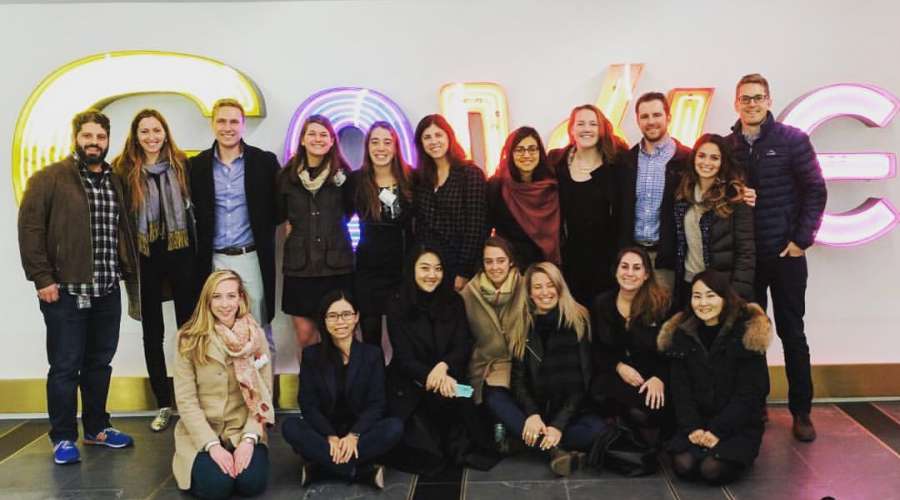 Tuck encourages students to take initiative and supports us in doing so. My classmate Dan Brugal and I led a technology trek to New York City, and we had a blast collaborating to plan the trip. Seventeen first-year students got to know one another as we explored the city and became acquainted with different company cultures. It was amazing to meet Tuck alumni in the industry and experience an instant connection.

We felt the creative energy as soon as we walked into Warby Parker: glass everywhere opened the office, sunlight poured into the central atrium, books lined the shelf that ran along the staircase to the second floor. Warby Parker was named after unpublished works by Kerouac, and the space vibrates with literary inspiration. The company designs fashionable and affordable eyeglasses and sells them online. For every pair you buy, Warby donates to a nonprofit that trains men and women in developing countries to give eye exams and sell glasses to their communities. We met Sarah, a T’09 who worked for the army, where she developed the assertive leadership to succeed as director of new stores and facilities. In response to customer requests, Warby is moving away from e-commerce and into retail: they have 44 stores in 30 cities across the U.S. and Canada. Sarah advised us that, as we explore opportunities at different companies, we should be clear about our value add and be able to pivot.

We rode the Subway to Blue Apron, a company that delivers recipes and pre-portioned ingredients to make home cooking accessible to everyone. We sat around a conference table and feasted on breakfast sandwiches, while Felicia from corporate development and Greg from marketing spoke about “the circularity of what is cool” and how so many new companies center around subscription and snail mail. Blue Apron envisions building a better food system: while 34 percent of food gets wasted in the U.S., Blue Apron wastes 13 percent and strives to be more sustainable. The company maintains close relationships with farmers from whom they source ingredients. Blue Apron delivers fresh food: as opposed to going from farm to wholesaler to fulfillment center to grocery store and finally to your table, food goes directly from farm to Blue Apron to your table.

LinkedIn occupies five floors of the Empire State Building, so our entrance felt dramatic. We met Ana, a relationship manager, who invited us to partake of the daily free lunch. Surrounded by windows with epic views of Manhattan, we learned about the economic graph, which digitally maps the global economy to connect talent with opportunity. In a world where technology threatens to render certain human professions obsolete, LinkedIn’s vision to create economic opportunity for every member of the global workforce seems particularly important. The acquisition of Lynda, an online learning company that teaches skills to help people achieve their professional goals, will further LinkedIn’s mission to fill gaps in economic opportunities.

As we explore opportunities at different companies, we should be clear about our value add and be able to pivot.

In a trendy warehouse with brick walls on the Hudson River, Uber is transforming transportation. We met Paul from operations and Dan from marketing, neither of whom attended Tuck, but both of whom claimed the culture at Uber is aligned with Tuck in that it values intimacy, collaboration, and humility. They reflected that Uber was criticized for overcharging customers, and then for underpaying drivers, so their new brand strategy is to take control of their reputation and not let the media define them. They were excited to share about Project Beethoven, which consists of app features for deaf and hard-of-hearing drivers, where the driver’s app signals a new trip request with a flashing light instead of the usual audio notification.

We ended the day by walking on the High Line from Uber to Google, where we met Kevin T’12, Mike T’09, and Erika T’11. They corrected the misconception that Google is a tech company by explaining that, with 60,000 employees, they have every role imaginable. Erika added that, though Google is massive, she still felt like she had responsibility. She works in global business development and launched a product in two new countries in the past year. Mike described YouTube as a three-legged stool of creators, users, and advertisers. He sees YouTube ads as video storytelling, but he emphasized that Google is not an ad tech company. It’s about creating products people love and getting people online.

All five offices buzzed with innovation and excitement. The technology trek served as a reminder of the diverse plethora of opportunities available to Tuck students.