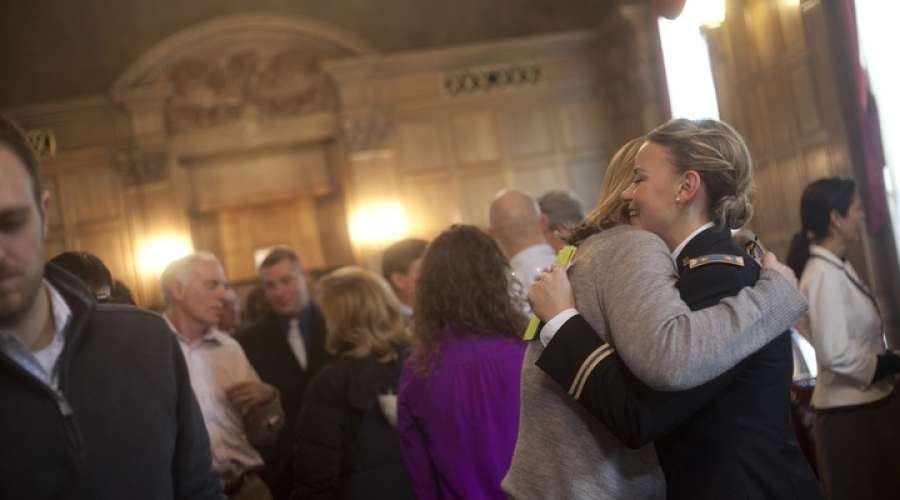 Why This Marine Chose Tuck

Going to business school was not even on my radar while I was in the Marines.  I didn’t know its purpose or who it was intended for. I grew up in a small town west of Boston and attended Bowdoin College in Maine. I studied Government, Legal Studies, and English and spent my summers at a residential fencing company, installing wooden fences. When not digging holes, I attended Officer Candidate School for the US Marine Corps in Quantico. An acquaintance of mine from Bowdoin had participated in the program and said it was one of the “best” experiences of his life. I always believed in the idea of service and thought this would be an awesome and challenging leadership experience.

After graduation and a short stint in construction management, I went back to the Marines. I spent about a year in schools of different sorts, ultimately ending up as an infantry platoon commander in Camp Pendleton. In my first deployment to Afghanistan, I was responsible for 50 Marines, 40 Afghan National Army soldiers, and about 60 square kilometers of local villages. I did a subsequent deployment as a platoon commander in support of the 11th Marine Expeditionary Unit throughout Southeast Asia and the Middle East.  After returning, I spent three years teaching at The Basic School and the Infantry Officer Course.

While I was at the Infantry Officer Course, one of my co-workers was applying to business school. I picked his brain for a while and determined that business school might be a good way for me to transition out of the Marines, learn some new skills, and apply my leadership skills in a different manner. I had no idea of what type of industry or company I would want to work for. Business school would expose me to industries and companies in the short term as well as give me some long-term flexibility by developing the hard skills needed to be successful later on.

Additionally, I was fortunate enough to lead the design and implementation of exercises that tested current and future Marine Corps equipment for potential future operating environments. The problem-solving involved with the exercises and knowing that the work I was doing was going to have an impact on the future of the Marine Corps helped shape my decision to go to business school. I truly enjoyed the problem-solving, working with other motivated people, and knowing that this work was going to help positively impact the lives of Marines. About a year later and after way too many hours doing GMAT math, I applied to and was ultimately accepted by Tuck.

Tuck was the best fit for me for a number of reasons. The small class size enables me to build a strong relationship with my classmates and professors. The close-knit community was a great place for our family. My wife was able to get a job in the Tuck Alumni Giving office and my daughter was fortunate enough to get a spot at the Dartmouth daycare facility. Additionally, living in Sachem Village (Tuck’s graduate student housing) has enabled my wife and me to build strong relationships with other couples at Tuck. The strong alumni network facilitated my learning more about Tuck during my school search process and also in getting a job once at school. The Tuck Tripod League (intramural hockey) was a way for me to stay active during the week while building strong relationships with the rest of my class, the second years, and other members of the Tuck community.

Post Tuck, my goal is to be a strategy consultant at a large international firm. I recently accepted a summer internship offer with Deloitte Consulting in their Strategy & Operations sector in Boston, MA, which I am extremely excited about. Tuck helped me to secure the internship by facilitating on-campus information sessions with Deloitte as well as coordinating a “Consulting Trek” down to Boston to visit the Deloitte office. Tuck also does a great job of putting you in contact with Tuck alumni at whichever company you are interested. One of the most special things about Tuck is just how strong the alumni network is. I was able to learn a ton about Deloitte’s Boston office through the Tuckies and military veterans who work there which absolutely helped shape my decision to apply to the office.

Many of the top business schools offer military applicants the opportunity to visit and learn more about their programs through special programs. Be sure to check with the programs you’re most interested in to see what they offer. Tuck is hosting its Military Visit Day on Monday, April 18, 2016. Join us that day to learn more about Tuck!

David's back on Tuck 360, this Thursday, with tips for business school applicants from military backgrounds. Make sure to check it out!