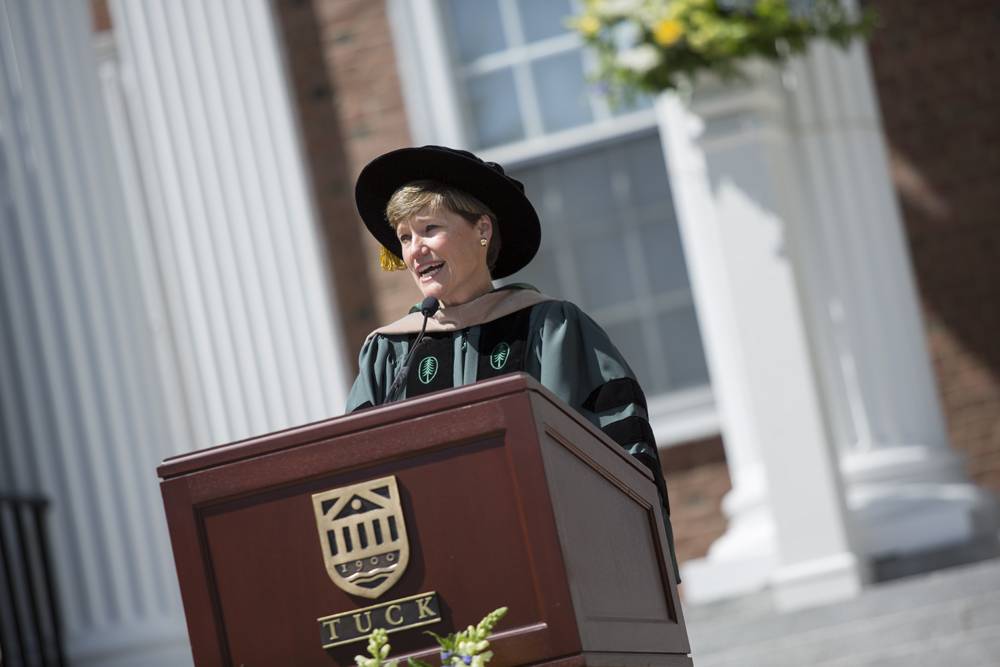 When Sherri C. Oberg D’82, T’86 was thinking about leaving her job at a venture capital firm to head up a fledgling pharmaceutical company, even the drug company’s scientific founder called her crazy.  “This is the Titanic heading at high speed to the bottom of the ocean,” he warned. “It can’t be turned around.”

In her address to 280 MBA graduates at Tuck Investiture June 7, Oberg used this story as a jumping-off point for three lessons she learned after business school. The first: How to take risks.

Oberg explained that she took the job with Acusphere in 1993 partly because she’d been the one to convince her venture capital firm to invest in the company. While the drug company had sound technology, it was behind in its technical milestones, lacked a business plan and CEO, and was down to about three months’ worth of cash. Still, Oberg believed new business leadership could save the young firm. In addition, she recognized it as a rare opportunity for a former history major, one with no CEO experience, to potentially advance her career faster and further than via a more traditional career path.

As president and founding CEO and director of Acusphere, Inc., Oberg oversaw the company’s successful revamping of its corporate strategy, helped raise more than $300 million in equity financing, and created a cardiovascular drug that is the current leader in its class. “Ultimately, the company was sold for a price that made the investors very happy,” Oberg said, “and I discovered I loved being an entrepreneur even more than being a venture capitalist.

In May, Oberg, who serves on Dartmouth’s Board of Trustees and is also an overseer at Tuck, left Acusphere to become president and CEO of Edu21C.com, an education company focused on meeting the needs of the 21st century workplace. “I now create the best plans I can,” Oberg elaborated, “but I expect them to be wrong, and I know the only way to find out what’s wrong is to speak up so I can get feedback from others and learn quickly.”

Before closing her address to the expectant crowd seated under a sunny sky in Tuck Circle, Oberg shared her third important discovery since leaving campus: “I had no idea how important my Tuck relationships would be throughout my life.”

Oberg noted that every job she took involved help from someone connected to the Dartmouth or Tuck community. “So don’t worry about leaving this wonderful place,” Oberg reassured the class of 2014, likely feeling as sad as Oberg herself felt at the thought of saying goodbye to so many close friends and valued professors. “It’s now in your blood for a lifetime, and you will be back.”