“The Chemistry We Have Works” 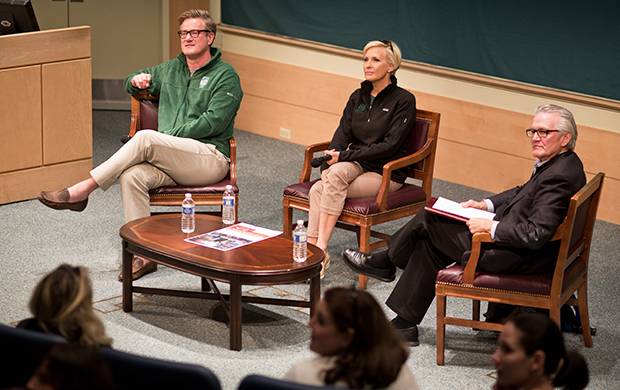 Capping off a two-day series of events that included a keynote speech at the Initiative for Women Symposium and a live broadcast from Stell Hall, "Morning Joe" co-hosts Mika Brzezinski and Joe Scarborough ended their visit to the Tuck School of Business by participating in a moderated discussion on May 1.

Moderated by Center for Global Business and Government Senior Fellow Curt Welling D’71, T’77, the discussion was presented by Tuck and Dartmouth’s Nelson A. Rockefeller Center for Public Policy. In it, Brzezinski and Scarborough offered their unique insight into topics ranging from the history of their show to today’s political atmosphere to the changing state of modern journalism.

"For eight years, what started as an attempt to fill the void left by Don Imus’ firing has become one of NBC’s crown jewels and one of America’s most celebrated destinations for news, commentary, and political debate," Welling started off. "But when 'Morning Joe’ first began, was there a moment when you realized it would be successful?"

"Mika and I had met the day before we first went on to do our test show. We’d been looking for someone who’d be a good co-host, and about five seconds after meeting me, Mika insulted me," Scarborough says. "I got on the phone to the president of MSNBC and said, 'I think we found our co-host.’"

Brzezinski and Scarborough’s playful chemistry was evident throughout the discussion, and both frequently drew laughter from the audience. They described how, much to the horror of producers and network executives, they threw out the scripts and riffed on each other’s viewpoints, which helped set "Morning Joe" apart from its competitors and the ever-growing infotainment-style news programming.

"I think our approach is more honest and more transparent. Everyone watching 'Morning Joe’ knows I am a liberal Democrat from Washington whose father served in a Democratic administration and that Joe’s a Republican who served in Congress and grew up in Florida. All these things bring our worldview to where it is," Brzezinski said. "I don’t think anybody would have a problem watching me with my liberal worldview cover a plane crash. There’s news reporting and there’s analysis. A human being has the ability to do both."

The co-hosts next offered their perspectives on the riots in Baltimore and what they saw as important opportunities for leaders of both parties to step in and tackle difficult issues. Scarborough then described the country’s lack of bipartisanship as "depressing" and called on Republican candidates to display greater sensitivity in light of Rand Paul’s recent joke about Baltimore.

After giving their opinions on Democratic presidential candidates Hillary Clinton and Bernie Sanders, Brzezinski identified the candidate she most wanted to run. Much to the surprise of the audience, Scarborough agreed with her.

"If I had my dream candidate to go out there—even though I would never vote for her—it would be Elizabeth Warren," he said. "I feel like she’s the best candidate out there on both sides and she’s not even running," added Brzezinski, citing Warren’s political resilience in the face of considerable professional setbacks. "Women need to think more like she did, like, 'Really? You’re going to kick me down? I’ll be back.’"

They then spoke at length about the challenges faced by women in multiple spheres. Brzezinski shared the story of her struggle to address the wage inequality she faced at the beginning of "Morning Joe" as well as her advice for women to become better advocates for themselves in every way.

"I ask women and challenge them through a lot of events I’m doing now to make a video saying why they deserve a bonus. All women should make one. When you hold the phone up, at first you might think, 'I can’t say something nice about myself,’ but no: you deserve more and you need to own that," she said. "What I’ve learned from Joe over the past eight years is there’s always another deal to be made. Always."

When asked whether women have achieved parity with men in the world of broadcast journalism, Scarborough described the level of misogyny in the media as "breathtaking." Brzezinski then listed factors that further complicated the issue, such as ageism. "I’ll just put it this way: I would not want my daughters to go into this business," she said.

When the floor was opened to questions, an audience member stated that he felt Scarborough did not give Brzezinski equal time to speak on "Morning Joe."

"We’re a show where Joe is surrounded by five liberals. Sometimes I decide to do just the news, manage the other voices coming at Joe, and let him take everyone on. If you look at the grand scheme of MSNBC, it’s all libs. We’ve got one conservative voice. I want it to be heard," she said. "We love that people come up to us all the time with advice. But we try not to overcorrect. The team we have works; the chemistry we have works. Neither of us would be good alone."

"It’s fun: five liberals versus one conservative. It’s not a fair fight—it really should be seven or eight liberals," Scarborough said with a smile.