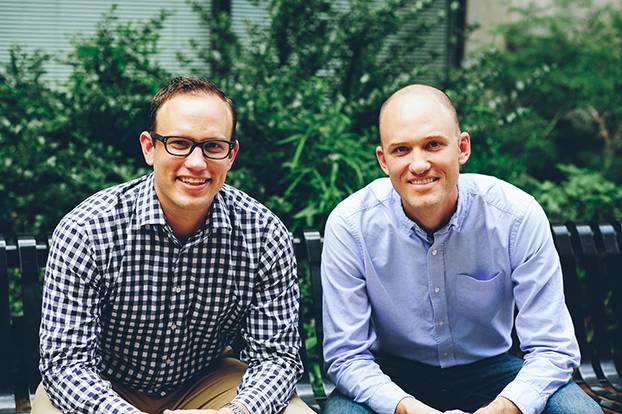 During the many hours Adam Gengler T’15 logged in the cockpits of CH-46 helicopters and MV-22 Ospreys as a Marine pilot, transporting people and cargo, he consistently noticed one thing: his aircraft was rarely full. To Gengler, the unused space was a waste—of flying time and fuel—and he thought there had to be a better way to orchestrate pick-ups to make use of the entirety of a machine’s payload.

He noticed the same thing when he moved to New Hampshire to attend Tuck in the summer of 2013. The moving truck carrying his family’s belongings had traveled from San Diego, where he had been stationed, to Hanover, half empty.

“I had used Uber a few times,” Gengler said, “and I started wondering if there was a way I could solve that capacity problem in a similar way.” Uber enlists non-commercial drivers willing to carry people who need rides, in effect maximizing the empty seats in an Uber driver’s car. Gengler’s idea was to make the same kind of connection between independent truck drivers and freight shippers.

To make sure this was a legitimate problem without an adequate solution, Gengler called his younger brother Aaron, who worked at a third-party logistics company that, among other things, acted as an intermediary between shippers and drivers. It turned out Adam was onto something. While the major carriers like UPS and FedEx use sophisticated algorithms to manage truck trips and capacities, a huge portion of the trucking industry is comprised of independent owner-operators who still rely on phones and fax machines to schedule their pick-ups and deliveries. This lack of central coordination results in shippers not knowing where empty trucks might be—and drivers missing potential jobs. Freight trucking is a $700-800 billion industry in the U.S., and the number of independent truckers is growing, so the Gengler brothers saw an opportunity to start a company that could be the freight broker of the digital age. “A lot of the value in having an intermediary is going away with technology,” Adam said, “so we wanted to be at the front of that. We think we can lower costs for shipping customers and still pay drivers more.”

The Genglers’ conversations about starting a company coincided with Adam entering the MBA program at Tuck. He came to Tuck intending to work for a startup when he graduated, or start his own company, but when he saw all the opportunities to work for established firms, his entrepreneurial visions dimmed. Then the freight-brokering idea hit him, and he went back to his original plan. “I just believed in this idea so much that I decided I was willing to dedicate my career to solving this problem,” Adam said.

Tuck’s first-year curriculum gave Gengler plenty of chances to think about his startup idea. He was able to do a project related to his then-unnamed company in Introduction to Entrepreneurship and Building Entrepreneurial Ventures, and his entire First-Year Project was dedicated to defining which segments of the marketplace would be interested in the kind of service he wanted to offer. At the same time, Gengler talked about his company with Tuck students and alumni, who helped him conceptualize and refine the idea and connect with other alumni in the industry.

By the spring of Gengler’s first year, his company had a name: Trusker. It’s a contraction of “trusted” and “trucker.” Adam and Aaron also had a PowerPoint pitch presentation, and with it they won the 2014 Tuck Summer Startup Award, which includes a $10,000 grant, office space on campus, pro-bono legal advice, and a host of other benefits. The award is organized by the Tuck Entrepreneurship Initiative, which coordinates the entrepreneurship curriculum and resources at Tuck and is a liaison to the 45,000-member Dartmouth Entrepreneurial Network (DEN). DEN opened a new office in downtown Hanover last summer, complete with a startup incubator space, and when Adam asked if he could base Trusker there, the director of the office, Trip Davis D’90, welcomed him with open arms. “It’s a really nice space,” Gengler said, “and it was very helpful to have a cool physical place to work in for the summer.”

It’s been less than a year since the Gengler brothers launched Trusker, yet they have made enormous progress in building the company. They have paying customers and are continuously refining the product. The core of the business is the Trusker website, where shippers post shipments and drivers bid on them. Trusker aids the transaction by matching shipments to drivers’ locations and equipment, and by being a clearinghouse for bids and payments. Trusker makes money by retaining a transaction fee. The next step, Adam said, is to build a mobile app to make it easier for drivers to interact with the platform.

In some aspects, the truck freight industry is old fashioned, operating today the same way it did three decades ago. That presented an opportunity for the entrepreneurially minded Genglers, but also a hurdle. “I would see Uber managing an entire fleet of drivers algorithmically and think, This could work in freight,” Adam said. “Then I would talk to someone in the freight business and they would say, Oh, there’s no way you can do that.” The Genglers weren’t satisfied with that answer, and now they are en route to proving it wrong.