On January 3, after 39 days of pulling sleds across 530 miles of snow and ice from the coast of Antarctica, Richard Smith T’11, Alan Lock, Andrew Jensen, and their guide Hannah McKeand made it to the South Pole.

For the trio of men, who make up the Polar Vision team that’s raising money and awareness for the visually impaired, it was the culmination of two years of training, planning, and fundraising, and the final execution of the trip couldn’t have gone much better. They arrived at their destination on time and without injuries, and thus far have raised more than $25,000 for the charities Sightsavers and Guide Dogs for the Blind.

Back home in England and catching up on loads of laundry, Smith reflected on his accomplishment. “It’s a weird roller coaster of emotions,” he said. “I was elated to be out there, but at times I wished I were somewhere warm. Now I’m done and I’m thinking, What’s next?” For the time being, Smith is looking forward to returning to Boston and to his job in the private equity group at Bain Consulting. He started there in September and took a leave of absence at the end of November to make the journey to the southernmost point on earth. “I’m excited to get back to work,” he said.

The desk job will likely seem easy compared to their expedition across the ice. To start the adventure, the team boarded a midnight flight to the Antarctic coast from Punta Arenas, Chile, on November 26, and set off on skis the following day. They were challenged at first by the monotony of the barren landscape, but soon overcame that with a bit of symmetry: a daily routine. They broke the days up into six “marches” lasting an hour and 15 minutes each, with a 10- to 15-minute break in between. With the exception of Lock, who is legally blind from macular degeneration, they took turns navigating: McKeand did the first and fourth shifts; Smith took the second and fifth; and Jensen the third and sixth. The routine continued when they set up and broke down camp, with each person doing specific jobs every day.

For the first 10 days, the weather was on their side. The temperature hovered between 20 and 30 degrees Fahrenheit—balmy, by Antarctic standards—with blue skies and not a lick of wind. But it couldn’t last. Soon, storms blew in, bringing days of complete whiteouts and a stiff wind that was never at their backs. On these days, they couldn’t use the standard strategy of finding a snow feature and skiing toward it for five minutes. Instead, they had to shuffle, feet unseen in the white fog, according to the bearing on their compasses. This was complicated by the presence of sastrugi—jagged, three-to-five foot snow mounds formed by the wind. With Lock in tow, they had to navigate around these obstacles carefully. “We’d create a V-formation around him,” Smith explained, “with one person in the lead with the compass and two people flanking Alan on either side.”

When they reached the South Pole on January 3, they were happy to find the structures erected for the celebration of the 100th anniversary of the Amundsen and Scott expeditions, which made it to the pole on December 14 and January 17, respectively. Being right in the middle of those two dates, “we had the pole all to ourselves,” Smith recalled. They took plenty of photos at the Ceremonial South Pole, ringed with the flags of nations, and were invited inside the Amundsen-Scott South Pole Station, a research facility built by the United States. 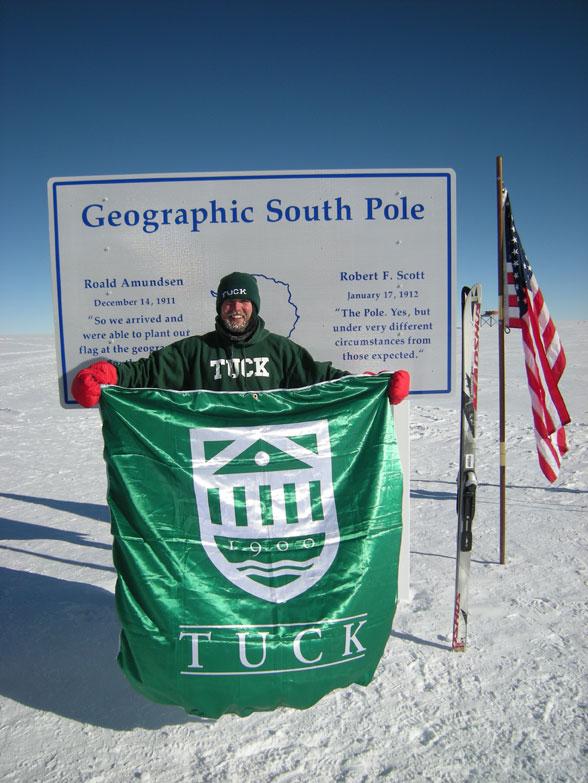 “Tuck was a huge part of our success,” Smith said. “There is no way on earth I could have done this had it not been for my MBA experience.” Help came in the form of major financial backing for the operational expenses by Daniel Revers T’89 and another anonymous alumnus. One of the team’s biggest equipment sponsorships came from Iridium, the maker of satellite phones and equipment. That sponsorship, which included two phones, Wi-Fi access points, and unlimited minutes, came through the Tuck network. In addition to that practical assistance, Smith said being at Tuck gave him the leadership skills and confidence to achieve a goal of this scale. “You’re driven to succeed because of the other people doing the same thing,” he said. “When you’re in this high-performing environment, it rubs off.”

Their mission accomplished, the Polar Vision team is now focusing on sharing its experiences with the world, through speaking at conferences in Norway and the U.S., and by creating a documentary film about their trip. They’re looking at their expedition as an asset that can keep paying dividends. “We have to think about how best we can use this for our sponsors, the stakeholders in Polar Vision, and the charities,” Smith said.