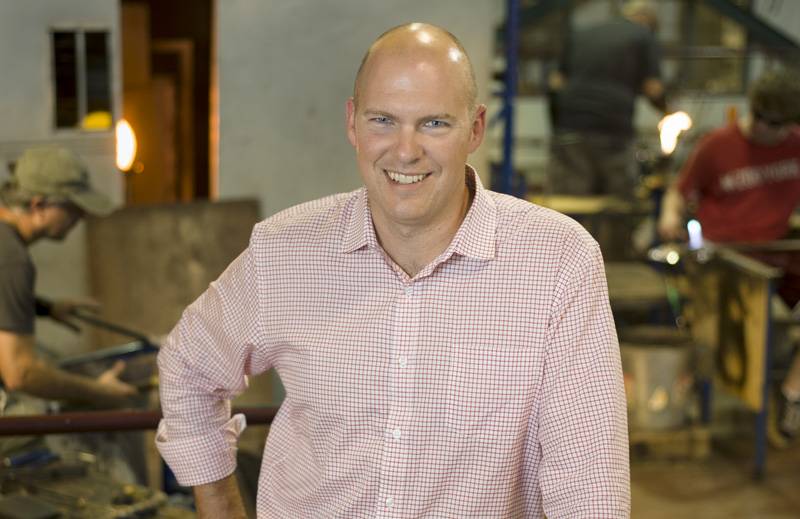 As CEO of Simon Pearce, Clay Adams T’99 has the Vermont-based glass and pottery company poised for growth.

On a Friday in August, the 100 or so employees at Simon Pearce’s Windsor, Vt., headquarters are shutting down shop. Instead of working this afternoon, they will walk next door to the local rafting outfitter, hop in a bunch of boats, float down the Connecticut River, and then grill hot dogs and hamburgers all afternoon. This one fun day is a small thing, but it’s important to Clay Adams T’99, who signed on as CEO of the glass and pottery company in July 2012.

Creating a great place to work is just one of the goals Adams has set in an effort to poise the heritage brand for growth. “Building a great place to work matters a great deal to me,” says Adams. “But even more than this, Simon Pearce is a brand that has tremendous opportunity because of the heritage and story behind it. Every now and then companies have to reinvent themselves, and that’s what we’re going through right now.” Adams is doing this by listening to the customer, leveraging the Simon Pearce production facilities, and capitalizing on the company’s “Made by Hand in America” credentials.

Since 1971, when Irish glassblower and potter Simon Pearce opened a shop in his homeland, the company moved to Vermont, opened a restaurant, launched several retail stores, and built a second production facility in Maryland. Now you can find the company’s products online and in retail stores throughout the country, while the restaurant regularly serves hundreds of meals in a day. But Adams believes there is room for more, and that promise lured him from a decade-long tenure at the consulting firm Resource Systems Group (RSG), where he most recently served as CEO.

In the last year, Adams has set the stage for expanding sales beyond Simon Pearce’s comfortable base in the Northeast. A board of directors was formed to advise senior management and the Pearce family, which still holds the company, and in August, Bloomingdale’s debuted Simon Pearce goods for the first time, introducing the brand to a new set of customers. This fall, a shiny new website launched to help give e-commerce sales a boost.

Adams is also hiring employees in sales and marketing, including his first Tuckie, Micah Moreau T’10, the new director of digital marketing and e-commerce. He has taken advantage of Tuck’s proximity in other ways as well. A second-year student's independent study provided useful insights to the company; students working on a First-Year Project created a consumer segmentation plan for The Loft at Simon Pearce, a private dining space within the restaurant; and Adams has connected employees with Tuck faculty for advice.

He considers Tuck just one of the great perks of working for the company and living in the Upper Valley—perks he hopes will help him attract and retain talent in the coming years. Perhaps it will even help Simon Pearce earn a spot on the coveted “Best Places to Work in Vermont” list, as RSG did for seven consecutive years under Adams’ watch.

“Who wants to come to work with people who aren’t happy?” says Adams. “I’m a firm believer that if you have engaged employees, profits will follow.”