Andrew Bernard’s discovery could change the way we think about global trade. 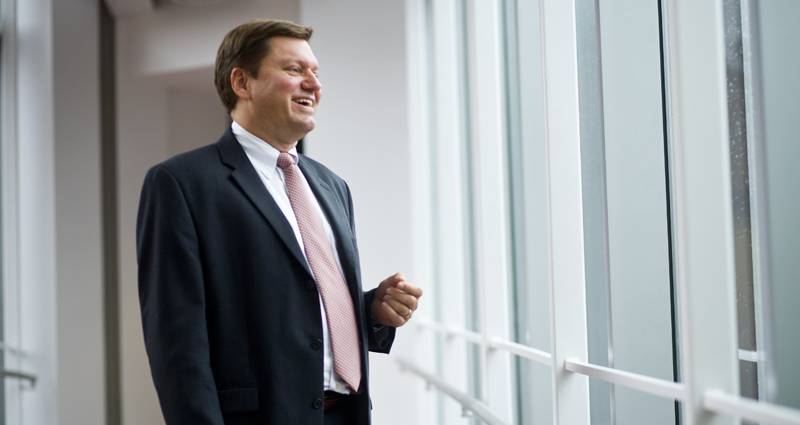 It’s a long-held bit of conventional wisdom about global trade: manufacturing firms often produce many products, and they export some or all of those products to other countries.

But Andrew Bernard, Jack Byrne Professor of International Economics at Tuck, recently thought to ask another question of manufacturer/exporters: Of all the products you are exporting, how many of them do you make yourself, and how many are made by another firm?

The answers have led to new research that may prove useful to the way both researchers and governments think about exports. Bernard and his colleagues discovered that nearly all manufacturers who export into foreign markets are selling some products they themselves bought from another firm. Bernard and his co-authors have dubbed these products “carry-along trade.”

In one example, a major coffee roaster in Belgium exports coffee beans around world. But the company also exports cups, sugar packets, coffee machines, tea, cookies, and anything else their clients need to create a break room or coffee bar. Yet they don’t actually manufacture anything but coffee beans. In another example a company that made and exported tractors also offered replacement brakes and windshield wipers made by a third party. “Firms actually export many more products they don’t make than the ones they do,” says Bernard. “These are carry-along trade. But on the flip side, most of the value of their exports is in their own products.”

How many manufacturers are exporting this way? Nearly all of them, the researchers say. Firms don’t think of it as odd—they’re simply meeting their customers’ needs. But for models of international trade, this idea challenges convention thinking. In fact, the way the United States tracks manufacturing and export data doesn’t even allow for this type of analysis. It was Bernard’s co-authors in Belgium that brought him their domestic data, which allowed them to document the distinction. For the first time, they could note what a firm makes and compare that to its exports in an apples-to-apples way.

“What we found was at first a little bit puzzling,” admits Bernard. “Almost every manufacturing firm is exporting products that it doesn’t make? We spent a lot of time worrying about whether it was a mistake in the data or really true.”

But the phenomenon was borne out through interviews with more than 20 companies in Belgium and the U.S. “Every single one ultimately described selling something abroad that they did not make,” says Bernard.

To build a theoretical framework for the idea, Bernard collaborated with his Tuck colleague, Emily Blanchard, an assistant professor of business administration. The theory presents a general model that potentially explains the phenomenon. One of the theories is that by offering a wider range of products to a client, firms are able to increase demand for their core product.  Bernard and Blanchard intend to explore additional implications of the theoretical model in future work.

“In the paper, we tried to develop a general set of explanations based on both supply and demand factors,” says Bernard. “We don’t know exactly what’s driving this and it may differ across firms.”
The idea of carry-along trade may dictate how we measure firm productivity, or how we look at balance sheets for accounting and financial statistics. It also casts large manufacturers as a sophisticated intermediary between other, perhaps smaller, manufacturers and foreign customers. Governments perennially aim to increase manufacturing exports, yet this paper introduces the idea that when firms do increase their exports, they are often sourcing those products from other manufacturers, both domestic and international.

“Every country wants to push its small and medium firms into the export market,” says Bernard. “This research suggests that many of them may already have their products going abroad, but the conduit they use are other manufacturers. It may be that those small firms are looking for international customers they’re already indirectly serving.”

Bernard believes the implications may stretch further than they can currently imagine, into areas of accounting, finance, and policy, and that he and other scholars have a lot to explore in the future. “Carry-along trade is a very disruptive idea.”