Riverstone Holdings LLC managing director and co-founder David Leuschen D’73, T’77 on making it in the energy business, and in life. 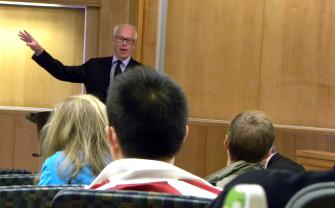 With a twinkle in his eye, Montana-born David Leuschen D’73, T’77 shared with Tuck students a shockingly candid appraisal he received at the beginning of his career. “Decades ago, I was told, ‘You’re a middle-of-the-pack, nice, fun guy, but you’re not that bright. You’re from an energy state: Why don’t you focus on energy?’” he recalled.

Leuschen offered this off-the-cuff anecdote and many others in his Oct. 22 Tuck talk, “The Energy Revolution in the U.S. – M&A, Financing, Investing,” part of the Center for Global Business and Government’s Killingstad Global Insights Series.

Co-sponsored by the Revers Energy Initiative, Leuschen’s talk covered his work as managing director and co-founder of Riverstone Holdings LLC, as well as his perspective on the future of the energy field. A self-proclaimed “energy lifer,” Leuschen provided students with an unfiltered view of his company’s success and was frank in his estimation of the intersection between human nature and business reality.

“Riverstone was founded with a fairly simple thesis: the energy business is not what you think it is. It’s a great food chain with $2 trillion of opportunities moving around,” Leuschen said. “Everybody’s operating on a high libido, slicing off things that don’t move and sending them down the food chain. That’s our oxygen: we’re the little lizards crawling down at the bottom, creating new businesses.”

After sharing the 18 points of Riverstone’s mantra and several emerging themes from the global energy sector, Leuschen took questions from students, drawing parallels between the film and the oil business—“You lose money on many ventures until you hit a gusher”—and urging students to embrace failure not as a cause to stop but instead as a cause to celebrate.

“I used to give a speech called ‘Fail by 5,’ said Leuschen, referring to the need to experience a significant setback by the fifth year in one’s career. “If you have not had some unmitigated failure in your career, then you’re not at the edge,” Leuschen said. “You’ve got to live a little on the edge.”

“Right now the pendulum is swinging so rapidly it’s hard to know what’s going to happen,” he said.

Pointing out the extensive knowledge advantage—both practical and theoretical—that traditional energy sources have over the burgeoning field of renewable energy, Leuschen compared the tension to standing with one foot on a dock and one foot on a boat: a precarious situation with no easy solution.

“If you want to clean up the world, clean up or convert China. China produces a U.S. every four years in terms of a carbon footprint, but I don’t know how you ask them to do it,” he said. “It’s an unsolvable problem unless there’s a cataclysmic event. I’m not going to say there’s no global warming, but it’s going to be really difficult to have people clean up their environment who haven’t had their shot.”

Leuschen conceded that the future does, to some degree, belong to China, although he posits that we’ve entered a second American century, thanks to today’s energy revolution, exemplified by our abundance of cheap fuel. In fact, he sees North American energy dominance going mostly unchallenged, a result of the continent’s global shale monopoly and its unique advantages, including private ownership of resources, well control, truck-friendly infrastructure, and relatively low population density.

“It’s amazing what’s happening in North America. People ask, ‘Why are you guys so successful and how did you figure it out?’” he said. “I was very lucky to be born where I was in the year I was. Virtually all shale production comes from North America. It is an extraordinary time to be in this business.”