Event provides a look at Tuck’s academic and social life. 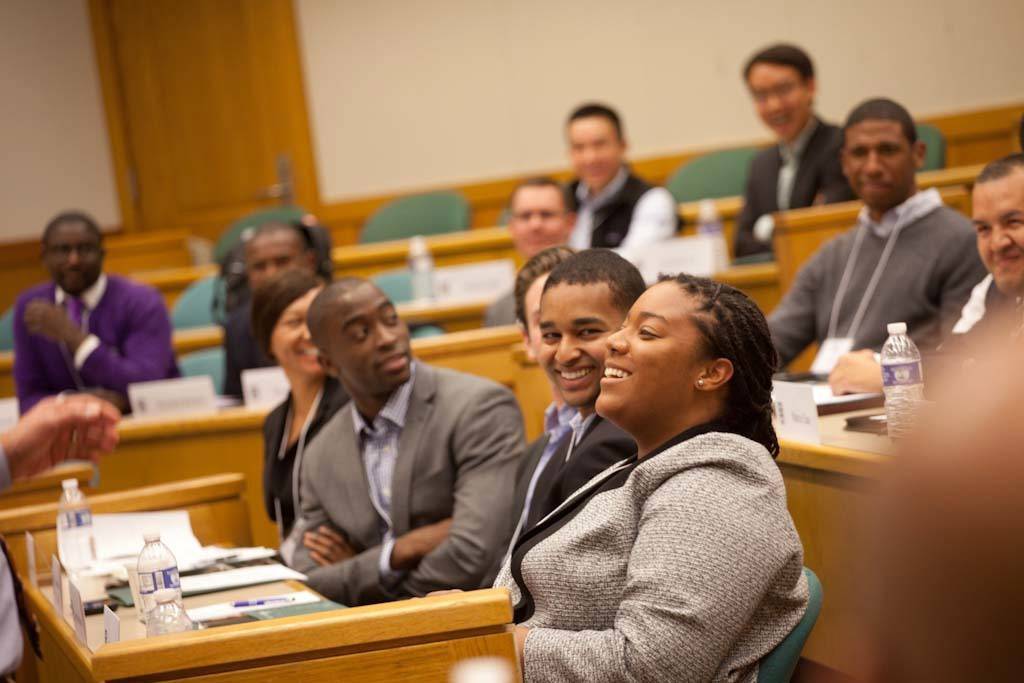 Student-run conference brings together prospective students, current MBA candidates, and alumni for an informative, fun weekend on all things Tuck.

Ryan Golden T’15 had never lived outside her home town of Atlanta, Ga. until she moved to Tuck in the summer of 2013. The drive from the Peach State to Hanover is 17 hours and it crosses the Mason-Dixon line, an invisible boundary that separates the culture and climate of the South from those of the Northeast. Yet Golden arrived in New Hampshire on that sunny day in August surprisingly at ease in her new environment, mostly because it wasn’t all that new to her.

That’s because Golden had attended the Diversity Conference at Tuck the previous November, where she stayed on campus with students for three nights, met alumni and other prospective students, and learned all she needed to know about the school. “It just showed me this is a good place to be,” she recalled, “and that if I came I’d be really well supported and have a good experience.”

Tuck’s annual student-run Diversity Conference (Divco) has been bringing together prospective students from all over the U.S. and the world since 1994. The event is a unique opportunity to get a feel for the Tuck community, meet others with similar backgrounds, and discuss questions and topics common to diverse candidates.

The format of the three-day weekend is designed to maximize attendees’ exposure to Tuck’s academic and social life. Those who attend the conference must only pay for their travel to Hanover; once they are on campus, meals are provided by the school and prospective students stay overnight with current students in residence halls. The agenda during the days features alumni speakers, panel discussions on admissions and student life, and sample-classes with Tuck faculty. The evenings include an international party, with food from around the world, and the famous Black Light party on Saturday night, with music and dancing. “It was great to see the daytime Tuck and the nighttime Tuck,” said Golden. “I don’t think you could get a better sense of the school any other way.”

Ali Bachani T’14, a co-chair of the 2013 conference, feels the same way. When he attended a Divco as a prospective, he was surprised to see his student-host saying hello to everyone he passed on campus. “I learned that’s normal here,” Bachani said. “And it’s not something you see until you get here.”

Bachani and Golden had such memorable experiences at Divco as prospectives that they decided to help organize the conference once they enrolled at Tuck. “I was personally touched by the program and really impressed by what the co-chairs did,” Bachani said. “So being a co-chair was a chance to give back, to show prospective students this great experience and perpetuate it for another year.” As a co-chair in 2013, Bachani was in charge of external marketing, which involved communicating to candidates and the Tuck community through posters, post-cards, e-mail and social media. A bonus for Bachani was the opportunity to communicate with prospective students before they arrived at Tuck. “Seeing them come to campus and interact with other prospectives, just like I did, was really heartwarming,” he said.

Golden, meanwhile, was on the registration committee, spoke at a welcome gathering and a panel discussion, hosted a student, and put on a small group lunch. “I tried to be as active as possible,” she said. “I wanted to make sure the attendees left with no questions and had a good understanding of Tuck.”

For both Golden and Bachani, Divco was the event that made Tuck their first choice for business school. It showed them what Tuck is—collegial, collaborative, diverse, rigorous—but also what it’s not. “There’s a common perception that there’s not much to do and that the people are not the kind you’ll find in a city, but the weekend really blows that away,” said Bachani.

Golden puts it another way: “I think a lot of people walk away from Divco pleasantly surprised from the experience,” she said. “I know I did. I had much more fun than I expected.”

Students and staff are already looking ahead to planning and delivering the 2014 Tuck Diversity Conference, which will take place from November 6-9, and promises to continue the tradition on celebrating the potential, talents and contributions of the Tuck community.