Killingstad was the first speaker of this year’s Killingstad Global Insight Series. 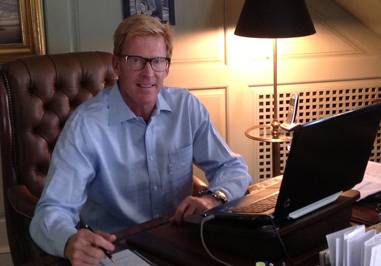 Killingstad was the first speaker of this year’s Killingstad Global Insight Series.

Tuck’s Center for Global Business and Government welcomed Bernt Killingstad T’86 to campus on September 30 for a talk to launch the Killingstad Global Insights speaker series.

Killingstad is the managing director of AIG Lincoln Europe, a real estate company with holdings in 10 European countries. The chairman of Lincoln Property Company and Killingstad first established Lincoln Europe in 1992, in the nascent market of unified Germany; since then, Lincoln teamed up with AIG to form AIG/Lincoln Europe in 1996 and the firm has built $3.5 billion worth of properties and generated $1.5 billion in profits. Over the course of his 45-minute talk, Killingstad shared with students and the Tuck community some of the most critical lessons he learned while doing business in foreign—and sometimes fledgling—nations.

In essence, Killingstad is a Norwegian—educated in America—who saw huge real estate opportunities in post Cold War Europe and Eastern Europe. His biggest challenge in turning his vision into a profitable business, he said, was learning how to do the due diligence necessary to make deals and build infrastructure. The risk was massive, since he was going into foreign countries with shifting legal and financial landscapes. Eventually he formed a model: find the right local executive to run the operation, and then take at least 12 to 18 months to really get a lay of the land. “We spent $2-3 million per country before doing the first deal,” he explained. “We needed to know where the roads were going, where people would be living, where the airports would be. It set us up well.”

Over time, Killingstad learned that young economies aren’t just unpredictable, they are usually full of corruption. “I underestimated how bad it was,” he said. “We ran into it at all levels of government and business.” He explained that the Foreign Corrupt Practices Act (FCPA) and AIG’s strict adherence to it made it imperative that his U.S. company strictly avoid business methods that were considered normal in places like Russia and Poland—things like bribery and kickbacks. In response, AIG Lincoln Europe vets potential partners with references and careful security checks, and the company spends a lot of time training its staff on the intricacies of the FCPA. “It’s vital for us,” Killingstad said. “And it helps reduce corruption overall and gives us a better chance to be competitive in the market.”

Corruption, at least, is a known pitfall. There are others, however, that seemingly appear out of nowhere. These Killingstad called black swans, with a nod to the book by the same name, written by Nassim Nicholas Taleb. Also called dislocation events, black swans are highly improbable events with a massive impact. Two examples that affected AIG Lincoln Europe were the financial crises in Asia in 1997 and in the United States in 2008.

At the time of the Asian crisis, Killingstad was doing due diligence in Russia. It turned out that the biggest buyers of Russian oil and minerals were countries in Southeast Asia. When the region set off a contagion of currency devaluations, Russia caught the bug too. “I had no idea Southeast Asia would have this impact on Russia,” he said. “We got lucky and didn’t get impacted, but some of our competitors got absolutely killed.”

The U.S. financial crisis wasn’t as easy to avoid. After all, AIG owned 51 percent of AIG Lincoln Europe, and when the subprime mortgage market imploded, AIG was left holding $500 billion in credit default swaps—$50 billion backed by sub-prime securities that came due practically overnight. Instantly, AIG had no money to pay for the completion of AIG/Lincoln’s various offices and other properties in multiple countries throughout Europe—nor support any of their other joint venture operations around the world. In the early days of the crisis, Killingstad went to AIG’s offices in New York to understand what was happening. It was chaos.  People looked like they had not slept in days, some were crying ,and no one knew what was to come next as the federal government had taken control of AIG.  Killingstad was unable to get access to any decision makers and no one responded to phone calls or questions in person— they were on the “run.” It was a “panicky” feeling and he understood that his Europe operation was in “deep trouble.”

Eventually, AIG Lincoln Europe worked with the Fed  and convinced it to continue funding the real estate company. Four years later, eight of the 10 proposed buildings were built, and AIG Lincoln Europe repaid all the loans with interest and with an average 30 percent profit.

Killingstad concluded his talk with a word of advice that connects directly to the mission of the Center for Global Business and Government: “You really need to be deeply aware of the connection between your business and the government influence and regulatory environment where you’re going to work,” he said. “You do that with a lot of due diligence.”

The next Killingstad Global Insights speaker is David Leuschen D’73, T’77, the managing director of Riverstone Holdings, LLC. He will speak on Tuesday, Oct. 22, at noon, in Georgiopoulos Classroom.