With uncertainty at an all-time high, the operations and management science faculty, along with Tuck's international trade economists, are helping a range of industries refine their practice and prepare for what might come next. In this multi-part feature, we highlight current research by Tuck faculty.

Keep Food Waste Out of Landfills

In July of 2020, Vermont became the first state in the nation to make it illegal to put food waste into the conventional trash stream. Some large cities, such as Seattle and San Francisco, have similar food-scrap bans. The reason for the bans is that when food waste rots in a landfill, it creates methane, a greenhouse gas more potent than carbon dioxide. It is estimated that 20 percent of a household’s trash is composed of food waste, and that if we stopped putting food scraps into landfills, humans could reduce global greenhouse gas emissions by six to eight percent. The best thing to do with food waste is to turn it into compost, so it can be used as soil to grow more food, but the logistics of implementing a composting system at a large scale are quite daunting. 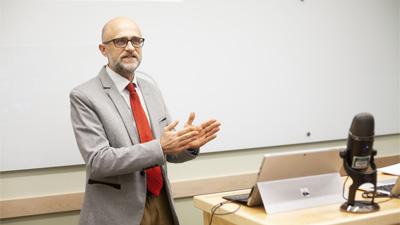 That’s the challenge Tuck professor Laurens Debo is studying, along with Thayer colleagues Vikrant Vaze, the Stata Family Career Development Associate Professor of Engineering, and Lilly Yang, a Ph.D. student. They are looking at Chittenden County, Vermont’s most populous region, to learn more about designing an efficient composting network that gives households a choice to do backyard composting, drop off their compost at a central location, or have it picked up by a private hauler. With each option, there are tradeoffs. Not everyone can compost in their backyard, especially in highly dense neighborhoods, and backyard compost creates more methane leakage than central composting facilities. On the other hand, having a truck travel to every household to pick up compost creates high transportation costs and tailpipe carbon dioxide emissions. “So we are trying to find, from a public policy perspective, the optimal approach as it involves routing, districting, centralized versus decentralized composting and other more complex decisions,” says Debo.

To do so, they are leveraging Vaze’s expertise in transportation networks and costs, and Debo’s expertise in logistics and modeling. The biggest problem to solve is the same one faced by the U.S. Postal Ser-vice and Amazon: how to visit every single house in a given area, and how to design the most efficient routes. It’s also called the “last mile” problem.

“This is something we discuss in my Service Operations course, in the context of e-groceries,” Debo says. “There was a company called Webvan during the dot-com boom that tried to offer grocery deliveries, but they grossly underestimated the cost of the last mile, and they went bankrupt. It’s a really difficult one to crack.”

The researchers hope their work will help other states and cities follow Vermont’s lead.