Book Seeks Truth Behind the Statistics in Soccer 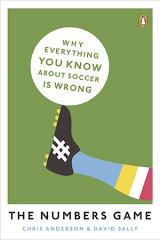 A new book called The Numbers Game by Tuck Visiting Associate Professor David Sally and Chris Anderson, a scholar and former professional goalkeeper, looks at soccer in ways that challenge many common views of the world's most popular game.

Using data from more than 8,000 matches from 2005 to 2011 in four top European leagues (England, Germany, Spain and Italy), Sally and Anderson analyze key elements of the game such as corner kicks, the importance of possession, and the role of the manager. Each of these factors, they say, is overrated. In contrast, the most important metric is managing turnovers.  The book, which has been widely reviewed in Europe, was released in the U.S. in July.

The Numbers Game notes that preventing goals is more important than scoring them—so a solid defense can be more valuable than high-paid strikers. Indeed, scoring has declined over the past 100 years to an average of just 2.6 goals per game.

One surprising and original finding is that winning is 50 percent luck. "The game is fundamentally a weak link game," says Sally. "It's determined by mistakes, by weak connections between players and by the weaker quality players."

Sally says he was surprised to learn that soccer players, apart from goalies, only possess the ball an average of 53.4 seconds during a match. "That reinforces how much soccer is a sport of off-the-ball movement and positioning," he says. Data also showed the four top European soccer leagues to be very similar in key "outputs" such as goals, shots and passes. "We see the same kind of convergence that arises in other global industries such as automobiles and banking," says Sally.

The book has prompted appreciative tweets and emails from professional soccer players and coaches. "We had thought soccer was ready for a book about how the sport is played and how squads should be constructed," Sally says. "We hope the book provides motivation for continued work in the future."

An important contribution of the book, according to Anderson, is that it prompts observers of the game to question their assumptions about what brings victory or defeat. At the same time, The Numbers Game is a fun read -- with colorful stories about the sport and its personalities.