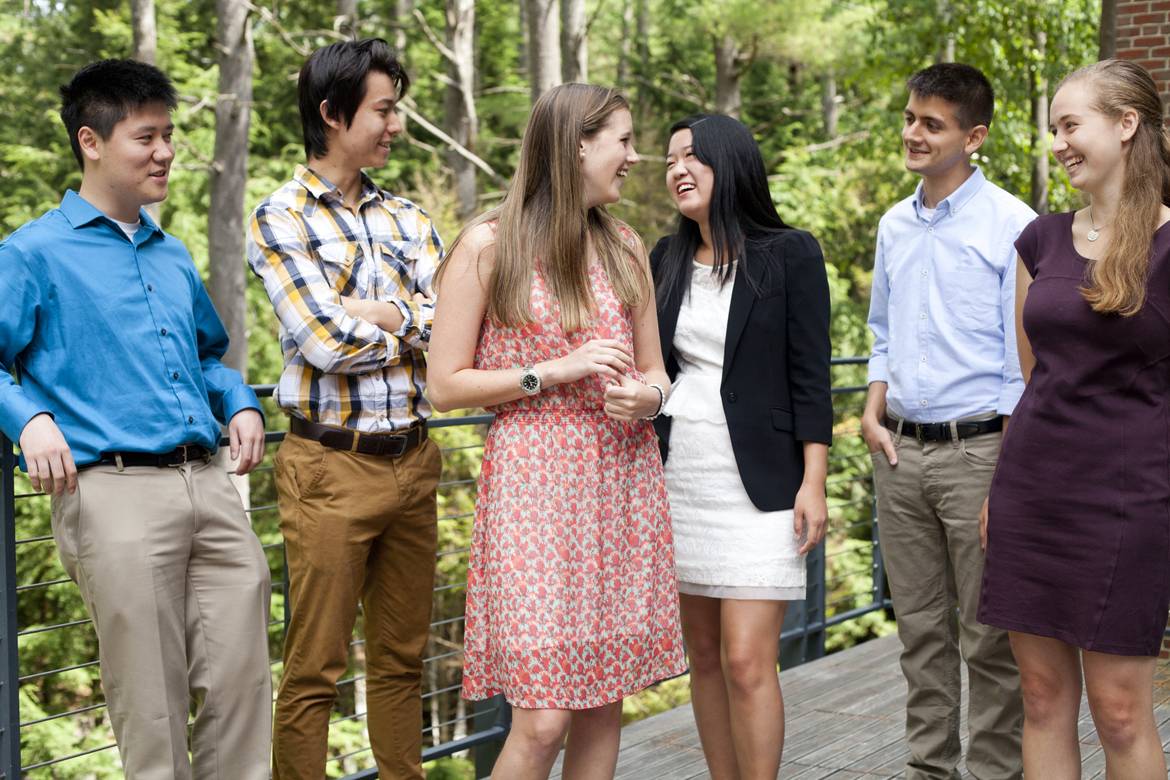 Addressing a middle-school class can be a humbling experience. Addressing an entire middle school in rural China with only one fluent Chinese speaker in your group can be downright terrifying.

“At first, I think we were as intimidated as they were,” says Jonathan Lu D’16, one of six Paganucci Fellows who spent their summer consulting for Beijing’s Dandelion School. “But then we remembered to appeal to their interests and sense of humor. So we made some small talk about things all kids like—wolves and spiders and scary things—and they warmed right up.”

While the topics that appeal to middle-schoolers may be universal, the situation for students at the Dandelion School is not. Under China’s hukou system, the children of migrant workers living in cities are shut out of the public education system. According to a 2015 article in the Financial Times, approximately 40 percent of school-aged children in Beijing—a city whose population is more than 21 million—fall into this designation.

To help bridge the ensuing education gap, the Dandelion School offers an affordable alternative to these children. One of its many supporters is Dartmouth’s Dandelion Project, a student-run organization that aids the school via an English e-learning curriculum and on-site volunteering trips. It was co-founded by 2013 Paganucci alumna Mary Peng D’15, who was encouraged along the way by Dartmouth economics professor and Nelson A. Rockefeller Center director Andrew Samwick.

“This year’s fellows did a fantastic job beyond all expectations,” says Peng, who returned to the program this summer to serve as a guide, coordinator, and on-the-ground mentor. “The advisory board was really pleased and provided specific feedback on how the fellows could not just move forward with the project but even scale up to something bigger.”

In addition to providing advice on the project and evaluating the fellows’ final presentation, the board's ultimate purpose was to offer insight as to how the project could fit into the overall experiential learning landscape of Dartmouth. For all of the fellows, seeing their work in perspective to its real-life impact was immeasurably valuable.

“I really loved how we got to take ownership of a project from start to finish,” says Sim. “What was most exciting about this entire experience has been doing work that’s directly applicable to the real world and a real issue with the potential for a real impact.”

“One of the unique benefits available to the fellows is access to Tuck’s resources that help them grow and develop as leaders,” says Richard McNulty, Paganucci faculty director and executive director of the Center for Leadership. “They’re participating in many of the same programs and workshops that we put CEOs and other high-level executives through.”

For example, a memorable experience this summer was working closely with a behavioral communication assessment coach, who not only analyzed their individual strengths, work styles, and personality traits, but also how they adapted them in the presence of their teammates.

Bonding and boosting their emotional intelligence came in handy since the rapid pace of the eight-week program left the six Fellows with little free time or privacy. In China, they worked around the clock and in every conceivable location, including on the subway and in taxis.

“Because we’ve spent so much time together, we’ve become a lot more efficient in our work,” Margolese says. “It’s been fun learning how to balance how we work individually with how we work in a group. We’re all much better now at voicing our opinions, analyzing solutions, and communicating.”

Although the students did not discover what the project would be until after they were chosen as Paganucci Fellows, the selection proved serendipitous for the native Chinese Wei, whose cultural expertise and language proficiency helped her assume a leadership role for the on-the-ground operations.

“For many of us, this was our first consulting-based project experience and there was a steep learning curve,” she says. “I enjoyed the experience so much I’m interested in pursuing consulting one day.”

For Manning, who was born in Peru and served as an interpreter and guide on last year’s Paganucci project, the entire experience helped expand her vision for what she could achieve professionally.

“Coming from a developing country myself, I’ve always been very focused on my region of the world so it was amazing to get really involved and passionate about solving problems somewhere else,” she says. “The best part of Paganucci is how much agency it gives you to make assessments and choices, both as a group and as an individual. Having so much responsibility was an enlightening experience.”

Ultimately, it is this sense of responsibility that each of this year’s fellows say has changed them the most.

“We work on these grand solutions that look great as PowerPoint slides, but at the end of the day, you remember the faces of the Dandelion School students, their smiles, their conversations,” concludes Zilberfarb. “Paganucci made it possible for us to see firsthand how students and student organizations have a lot of power to make change. From Hanover, New Hampshire, you can influence the lives of children in rural China.”