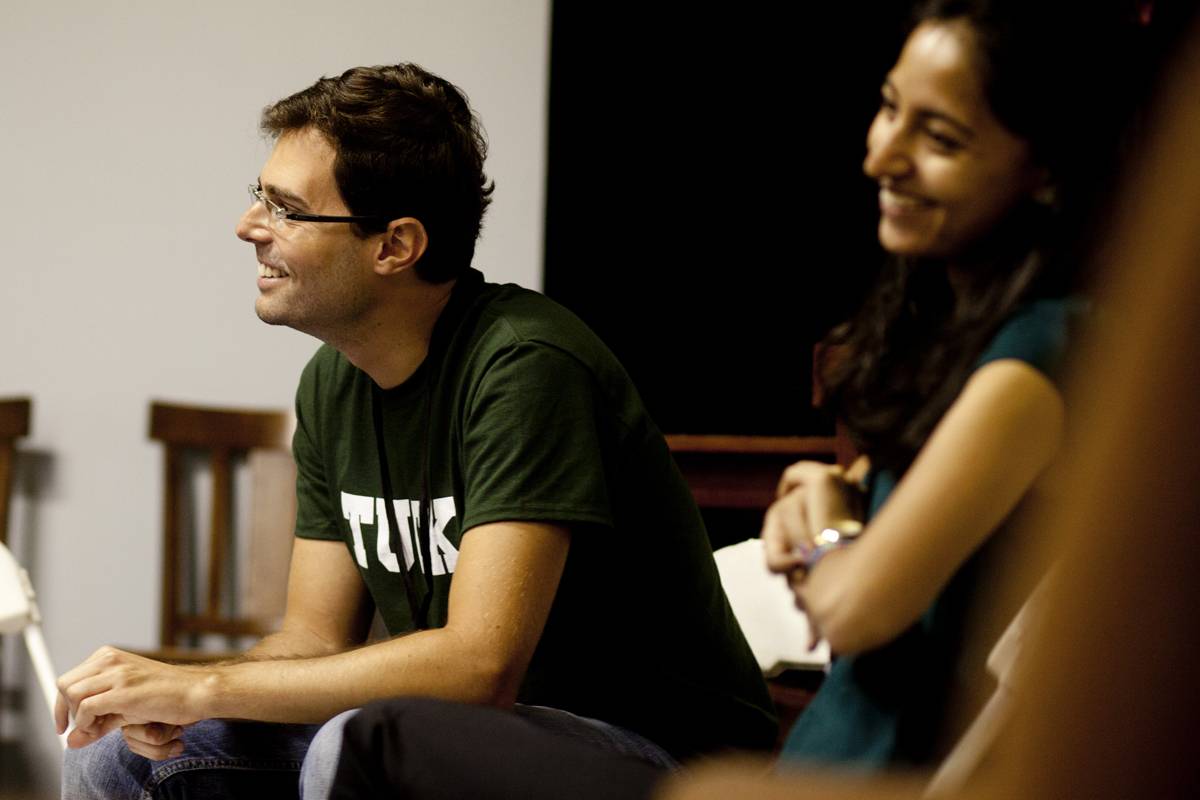 When Kate Semple Barta moved to the Upper Valley in 2006 after working as an immigration attorney in Chicago and Boston for five years, she quickly saw a problem: The region had a strong presence of foreign-born individuals but no organization that provided immigration legal services.

Recognizing the need for these services, in 2011 Barta founded the Welcoming All Nationalities Network (WANN), a nonprofit sponsored through WISE that provides free or low-cost legal services to vulnerable immigrants in the Upper Valley as well as community education and networking.

WANN is one of 34 local nonprofit organizations first-year Tuck students visited in late August for the 16th-annual Allwin Community Outreach Day. Allwin Day is one of many experiential learning offerings at Tuck that allow students to apply their business skills to address the needs of society. The Center for Business & Society program thrusts new MBA students into the role of consultants, with student teams devoting a half day to help a nonprofit address a specific business challenge.

Barta saw the opportunity to work with Tuck students as a great way to help her tackle a major challenge for WANN: awareness. How could she, in a concise way, demonstrate the benefits of having an organization like WANN in the Upper Valley? Six students met with Barta and were tasked with helping to refine WANN’s messaging so that individual contributors in the Upper Valley would know more about the organization they were supporting and how it would benefit the local community.

The students—Nicole Burns, Erin Dunn-Franklin, Jorge Nebreda Sanchez, Christopher Pericak, Jorge Sanchez Arenas, and Wendy Wong—began by breaking into teams and brainstorming about the challenge from an economic standpoint.

A majority of Barta’s clients are women and children from low-income backgrounds, and are survivors of domestic violence, persecution, human trafficking, and other crimes. Part of the students’ proposal was to be more explicit in the types of cases and people that Barta works with in order to educate the public about WANN’s mission.

“This is really about human rights when you get down to the core of it,” says Burns. “Really looking at the human element and drawing that out in the messaging was something we felt was very important.”

The students developed an elevator pitch for Barta that outlined the human rights challenge, what WANN offers and why it matters, and why the organization needs the help of the community. Barta was so pleased with the outcome that she hopes to engage a Tuck Student Consulting Services team on a new challenge: how to grow WANN in order to offer both the social services and legal services her clients need. Barta would also like students to help her determine whether it’s viable for WANN to extend its services beyond the Upper Valley to the greater New Hampshire and Vermont regions, where there are also significant gaps in legal services for low-income immigrants.

Working with Tuck, says Barta, was a great way for WANN to take advantage and gain from the business expertise of students while they’re still in school and learning. Not only this, but organizations like WANN provide essential services that are available to students.

“We hope that WANN’s services are valuable to all residents of the Upper Valley, including students at Dartmouth and Tuck,” says Barta. “We hope they don’t need them, but if they do, it’s in everyone’s interest for such organizations to exist.”

As part of Allwin Day, students also visited the Children’s Hospital at Dartmouth-Hitchcock (CHaD), where a team of 12 developed a proposal to increase overall participant fundraising at community events like the CHaD Hero, an athletic and fundraising community event that includes a half marathon, 5K, and a 10-mile hike.

“Partnering with Tuck allows us to tap into a community of extremely professional, talented, and driven individuals who are not typically from this region. We gained a lot of insight from that diversity,” says Benjamin Hall, brand and marketing manager for CHaD Community Relations. “And they learn as much as they can and gain as much as they can—it benefits both of us quite nicely.”

Eric Giles T’16 came to Tuck after working for the education nonprofit Teach for America and was heartened to see the emphasis the school placed on the role of business in society through events like Allwin Day.

“It confirmed for me that my business skills translate directly into social impact,” says Giles, who is pursuing a dual degree with Tuck and The Dartmouth Institute for Health Policy and Clinical Practice and hopes to work in the health care sector after he graduates. “It helped reaffirm that, if we’re going to solve the pressing issues of our generation, business skills simply have to come into play.”

For Nicole Burns, working with WANN allowed her to tap further into her passion for working with nonprofits and other organizations that make a difference in the world.  “It’s really important for me to give back,” she says. “I love that Tuck is involved in the greater community, and that’s one of the reasons I decided to come here.”