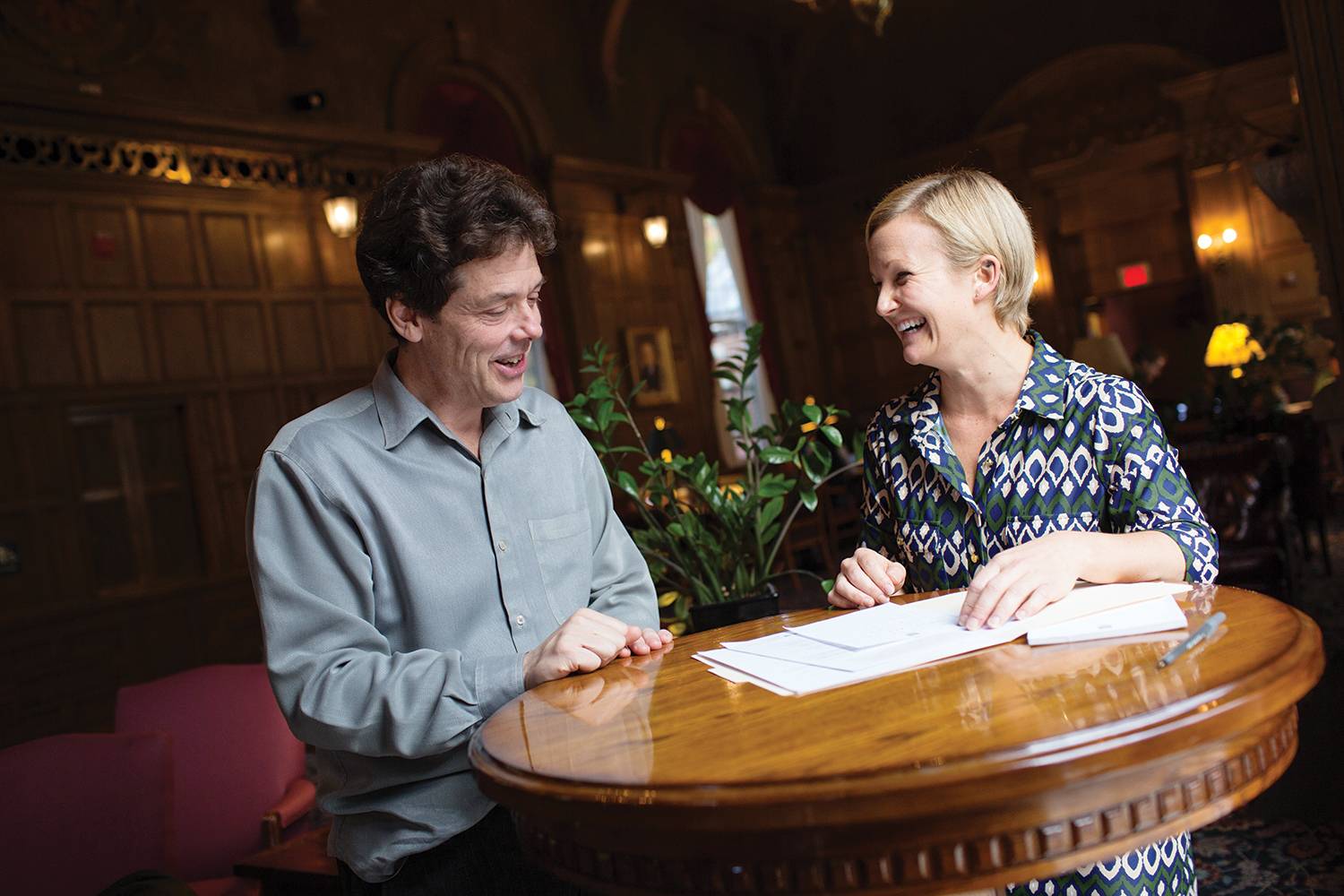 There have been a lot of changes at the Center for Private Equity and Entrepreneurship (CPEE) in the past year. At the beginning of 2016, the center’s founding faculty director, Colin Blaydon, stepped down. He was succeeded by Gordon Phillips, the C.V. Starr Foundation Professor. Over the summer, Tom Naughton D’89, T’96, the executive director of the center since 2012, returned to the private sector as chief financial officer at New Energy Capital. As of January, 2017, Tom Blaisdell T’89, a former general partner at the Silicon Valley venture capital firm DCM Partners, will assume the role of executive director of private equity. Alison Pearson joined the center as program manager in June, stepping in for Paula Tilson, who passed away in the late spring. “We all miss her warmth and energy,” Phillips said of Tilson. “She worked tirelessly with grace, greeting visitors and helping with center programming for over seven years.” And last but not least, Joaquin Villarreal T’08 stepped down from his position as director of the Entrepreneurship Initiative in June. The Entrepreneurship Initiative has been subsumed into the CPEE, and Daniella Reichstetter T’07 joined the center in July as the executive director of entrepreneurship.

Gordon Phillips came to Tuck from the University of Southern California, where he was the Charles E. Cook Community Bank Chair and Professor of Financial Economics. His research interests include private equity, mergers and acquisitions, and the impact of financial decisions on firms' strategic decisions. He is a research associate at the National Bureau of Economic Research, and last year he and several colleagues received a $518,000 grant from the National Science Foundation to study the evolution of private and public companies, which they will conduct by text mining the Wayback Machine, an archive of Internet pages. He also recently received a $47,000 grant from the Equitable Growth Foundation to study the role of personal credit in entrepreneurship.

Venture capital is the fuel used to finance entrepreneurial companies.

Phillips has brought some new ideas into the curricular and extra-curricular offerings associated with the CPEE. For many years, Colin Blaydon taught Private Equity Finance. Now, Phillips teaches the course, and he has changed the name to Venture Capital and Private Equity. “In addition to studying large-scale private equity investments, I put a bit more focus on venture capital,” he says, “because of the large interest in entrepreneurship and given venture capital is the fuel used to finance entrepreneurial companies.”

One of the hallmarks of the course, Phillips says, is the guest speakers from both sides of the private equity relationship: the company and the investment firm. For example, in October, Phillips welcomed Liam Donohue T’95 of .406 Ventures and the chief technology officer from AbleTo, a company that .406 Ventures invests in. AbleTo offers depression counseling for patients recovering from major illness or surgery, and evidence shows that the counseling is helping people get better more quickly.

“It was an inspiring story,” Phillips says. “A company impacting peoples’ lives in a positive manner, and it’s growing like crazy.” There is still a large section of the course that focuses on more traditional large-scale private equity investments. A new case that was featured this year was FreeScale, which underwent a leveraged buyout in late 2006. Helping him teach the case and providing a rich learning experience for the students was Bart Osman, T’96, of Lexington Partners, who has extensive experience investing in buyouts and other forms of private equity.

Outside the classroom, Phillips has spearheaded two independent study programs that shadow private funds. This year, 13 students are taking part in the independent studies. In one, students are working with the venture capital firm Borealis Ventures. In the other, students are affiliated with Tuckerman Capital, a private equity buyout firm. With both host firms located in Hanover, students are apprenticing with the firms’ partners for the year, working on live deals and getting first-hand venture capital and private equity investment and operational experience.

In August, Phillips augmented his teaching and research work by hosting a new conference at Tuck on private equity finance, organizations, and markets. It featured a keynote address by Steven Kaplan, the Neubauer Family Distinguished Service Professor of Entrepreneurship and Finance, and sessions on topics such as the liquidity cost of private equity investments, the roles of nature and nurture in entrepreneurial success, and the effect of patent rights on industry structure and R&D.

On the entrepreneurship side of the center, Daniella Reichstetter T’07 is excited to return to Tuck after an interesting journey through the business world that included starting and selling a company, and advising early-stage companies. Reichstetter matriculated at Tuck after joining the founding team at Method, a home-cleaning products company, where she helped launch 80 products on the national market. “I came to Tuck after living a make-it-up-on-the-fly approach to business, and I really wanted to have a proper underpinning of business education to help better inform the process of growing a business.”

I came to Tuck to have a proper underpinning of business education to inform the process of growing a business.

Reichstetter admits a passion for “finding innovation in stagnant industries.” While at Tuck, Reichstetter worked with Andrew Smith T’07 and other classmates on Andrew’s tractor trailer fuel efficiency company ATDynamics, winning the Rice business plan competition, the largest in the country. She later partnered with classmate Errik Anderson D’00, Th’06, T’07 to license the rights to an invention by four Thayer students that was designed to help children learn how to ride a bike without training wheels. Reichstetter became the founder and CEO of the company, Gyrobike. When it sold in 2012, Daniella began advising and consulting to a variety of early-stage companies with a sustainability angle, including food production, composite instruments, and recycled tile.

As the executive director of entrepreneurship at Tuck, Reichstetter’s goal is to nurture all students with an interest in startups, whether that means starting a company themselves, being an early hire at a company, or taking over the family business. She also wants students to know that working at an early-stage company is an option after Tuck. “These jobs aren’t always well advertised, but many resources exist for finding them, and that’s one of the things I’m focusing on,” she says.