Christopher J. Williams T’84 to Lead Board of Overseers

A Tuck overseer since 2008, Christopher Williams T'84 replaces William F. Achtmeyer T’81 as chair of the board of overseers. Achtmeyer is stepping down after 11 years of distinguished service. 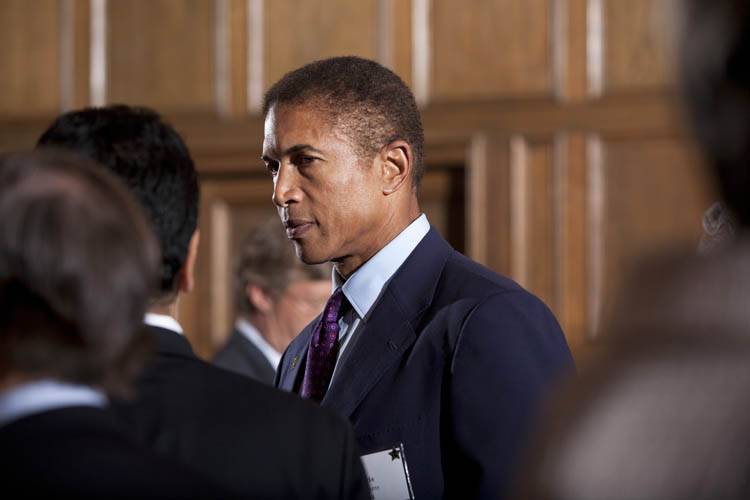 A Tuck overseer since 2008, Christopher Williams replaces William F. Achtmeyer T’81, who is stepping down after 11 years of distinguished service.

Since 1951, Tuck’s deans have had the benefit of formal advice from a board of overseers, alumni who guide the strategic direction and mission of the school. And as Tuck has grown, so too has the board: today it is comprised of 38 alumni who serve in many senior executives roles—CEOs, managing partners, and chairs of firms in the United States and abroad.

William F. Achtmeyer T’81, founder of the Boston-based consulting firm The Parthenon Group, has been the chair of the overseers since 1997. In addition to his generous support of Tuck and its students—his firm has hired scores of Tuck graduates over the years—Achtmeyer was a frequent visitor to the school, speaking at Admitted Students Weekend and Orientation each year and, all told, hooding more than 2,600 students at Tuck Investiture. Achtmeyer was awarded the Overseers’ Medal in 2012 in recognition of his distinguished service as overseers’ chair.

On July 1, Achtmeyer will hand the chairmanship to Christopher J. Williams T’84, an overseer since 2008 and a former member of the MBA advisory board. Williams, a graduate of Howard University, is the founder, chairman, and CEO of the Williams Capital Group, an investment bank and asset management firm. For the past eight years, Thompson Financial has ranked Williams Capital among the top-20 most active underwriters of U.S. taxable fixed income and equity transactions, and Williams has been named by Fortune magazine and Crain’s New York Business as one of America’s most powerful minority business leaders.

Why did you initially decide to join Tuck’s board of overseers and now increase your commitment by accepting the role of chair?

With respect to my professional career, I owe everything to Tuck, in terms of not just the technical training, but the strong network of alumni and the respect it has in the industry. The experience and academic enhancement I received there was critical to enabling me to enter Wall Street and thrive there. The good thing about Tuck is that the ethos of the entire school is consistent with the way I approach life. The teamwork, the broad perspective, the willingness to work hard and get the job done, the leadership skills without a sense of entitlement—that’s how I try to run my life and my organization. So I wanted to do what I could to help Tuck maintain its leadership position.

How do you see the role of chairman, and how do you plan to execute it?

I look to be a conduit between the dean and the board of overseers, the person who would have more frequent interaction with the dean and the administration and help promote the agenda and conversation on both sides. As I look through the roster of overseers, I see some very successful, knowledgeable, talented, wise people, and I think the dean will probably agree there’s even more we can do in terms of making sure we extract as much of that knowledge as we can. The good news is that every one of the overseers is on the board because they have a deep commitment to Tuck.

The world is undergoing a period of significant change. What impact do you see this having on Tuck?

There will always be new opportunities that require different skill sets and the Tuck MBA program and Tuck in general must always be looking at ways to evolve and adapt. We must continue to expand and improve our offerings in recognition of what is changing in the world. And the best way to do that is to make sure that decisions are made with the input of a broad group of very knowledgeable friends and peers, which is what Tuck’s board of overseers does so well.

What have you learned from the outgoing chair, Bill Achtmeyer?

The first thing I’ve learned is that I can’t even begin to replace the void that he leaves, because I think he’s been a fabulous ambassador for the school, a wonderful leader and cheerleader for the school. His personal style is very engaging and everyone feels good about interacting with him and having him chart the direction of the board. If there’s one thing I think of, it’s that the chair is not a highly structured role. It’s one where the importance is on how effective you are at getting and maintaining engagement, and I think Bill was extremely effective in getting engagement from members of the board because of a very natural and very positive personal style.

What part of this new role are you most excited about?

I just look forward to being able to have a meaningful and hopefully valued interaction with the whole Tuck community: overseers, administration, students. And doing what I can to help Tuck thrive and continue on the positive path it’s been on. If I had a role in that, I’d feel very good about the end of my term, whenever that would be.