COP18 and the Business of Climate Change

The world’s biggest companies have been ramping up efforts to curb climate change. 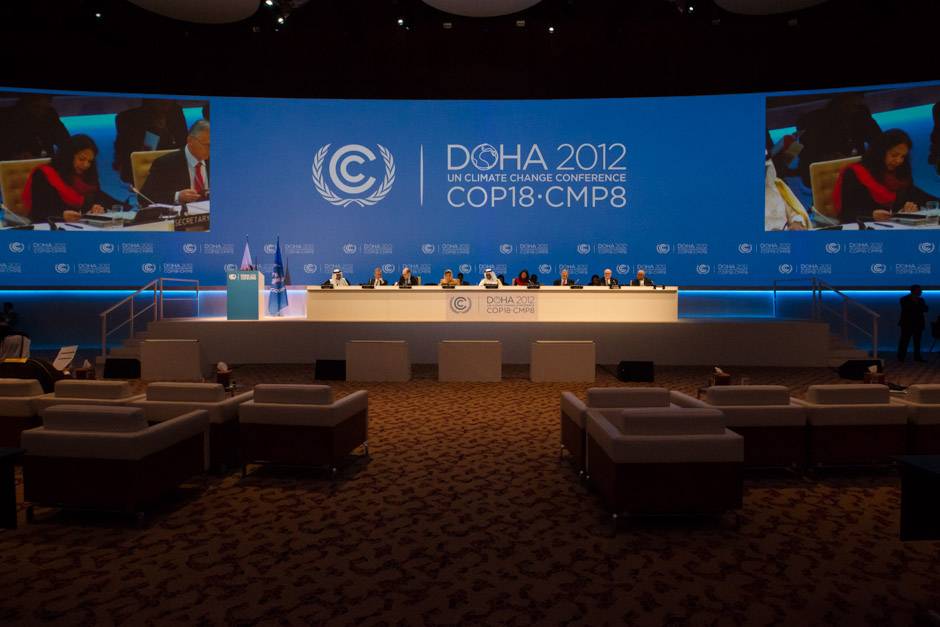 The world’s biggest companies have been quietly ramping up efforts to mitigate and adapt to climate change, says professor Anant Sundaram.

For the third time, finance professor Anant Sundaram is leading a group of students to the United Nations Climate Change Conference. This year’s conference, COP18, is taking place in Doha, Qatar from November 26 through December 7, and it’s one more chance for countries to discuss how they can reduce carbon dioxide emissions and prevent the catastrophic effects of climate change.

The delegation from the United States may have a stronger incentive to participate constructively this year, as 2012 has brought no shortage of extreme weather to North America, from droughts and wildfires to Hurricane Sandy—an event so large and unprecedented that the media dubbed it a “superstorm.” On the day Sandy hit, a 13-foot surge of water inundated parts of Manhattan, flooding tunnels and subways, and forcing the stock exchanges on Wall Street to close for two days. When the water receded, the storm’s toll was worse than anyone expected: 110 people dead and close to $50 billion in damages.

Aside from its frightful power and size, Sandy was significant because it heightened the national conversation about the connection between climate change and extreme weather. As it became clearer that the combination of warmer ocean temperatures in the North Atlantic and melting ice in the Artic conspired to pack Sandy with more energy, “global warming” was being muttered at the kitchen table and the water cooler alike.

But even before Sandy, climate change and carbon dioxide emissions have been topics of steady concern in corporate board rooms and CEO suites, says Sundaram, who teaches the Business and Climate Change elective at Tuck, perhaps the first course of its kind in an MBA curriculum. That’s a major reason behind the trip to COP18, where Sundaram is organizing a panel discussion entitled “The Role of Global Corporations in Moving the Climate Needle.” “At this point, there’s a massive amount of resources, talent, money, and R&D that companies are devoting to understanding climate change and how to mitigate their own carbon footprints,” Sundaram reports.

From a risk-management perspective, these efforts make sense. A report in October (before Sandy hit) by reinsurer Munich Re declared that North America has been most affected by an increase in weather-related natural catastrophes. With this increased risk will come more expensive insurance premiums for businesses, so companies are wise to understand what they’re in for.

For some multinational corporations, paying attention to carbon emissions has been part of doing business in the European Union, where there’s a cap-and-trade system in place. In some cases, that has benefited the United States, where there is no price on carbon. For example, Sundaram says, if General Electric were to build a locomotive in its Pennsylvania plant, it wouldn’t build different models for the E.U. and the U.S. “That has led to a race to the top for companies to design more carbon-efficient products worldwide,” Sundaram notes.

Yet companies operating solely in the U.S. are still trying to reduce their carbon footprints, even in the absence of regulation on carbon emissions. This may seem puzzling, from a purely dollars-and-cents point of view, but Sundaram thinks there’s another source of motivation: corporate image. “Companies realize they want to stay in business for the long haul and that, in turn, behooves them to be responsible players,” Sundaram asserts. “Today it’s almost become a signal of your quality. If you’re not doing these things, people look at you askance. As a result, it has seeped very deeply into corporate consciousness.”

Sundaram sees proof of this every year, when he brings together 20 to 30 chief sustainability officers from Fortune 200 companies for a conference at Tuck, organized by Tuck’s Center for Business and Society. “Ten years ago, the CSO was a non-existent job,” Sundaram says. “Today, two-thirds of Fortune 500 firms have a CSO or its equivalent. These are people reporting directly to the COO or CEO, and they’ve become integral leadership components of the business, driving change in all the ways the companies are interacting with the environment.”

Corporate concerns about sustainability are manifesting themselves in all sorts of interesting ways. Take Owens-Corning, the maker of home insulation along with coatings for propeller and wind turbine blades. Its new corporate tag line is “Pink is the New Green,” which reflects the efficiency gains to be made from insulation.

But efficiency is more than a business opportunity; it’s also an ethos that has worked its way through the management and operation of the company. Every year, 10 percent of the company’s capital budget is devoted to energy efficiency projects around the world. Frank O’Brien-Bernini, the CSO at Owens-Corning, told Sundaram he could spend many multiples of that on the proposals that come in. “It’s remarkable how much he has to turn down,” Sundaram says.

Perhaps most striking is that top managers’ bonuses at Owens-Corning are directly related to meeting targets for water use, carbon emissions and toxic waste. “When it starts showing up in the bonus and incentive system,” Sundaram says, “that’s when you know it’s deep change.”

Tyson Foods is another example. The company generates enormous amounts of animal waste in its processing facilities. A few years ago, however, it partnered with Syntroleum to turn the animal fat and grease into diesel and jet fuel.

These initiatives are just inklings of what’s going on out there and, more importantly, what’s to come, Sundaram speculates. He believes there’s an emerging multi-trillion-dollar climate economy forming around the areas of carbon and energy efficiency, non-fossil fuel-based energy, carbon capture and sequestration, and carbon markets. This is partly what led him to start the Business and Climate Change mini-course he teaches each spring.

“I come at climate change from a very hard-nosed finance lens,” he says. “Today’s MBAs will see the consequences of climate change in their lifetimes and they’re going to have to address what it means for their industry, for their business, and see how they can get in front of it.”

Tuck is the only business school attending COP18, and the group is blogging about their experiences and reflections (http://tuckcop18.wordpress.com/). For Pat Palmiotto, who as executive director at the Center for Business and Society organizes the trip every year, that is an indication of a stronger understanding of the deep connections between business and the health of the human and natural environments. “Climate change and energy scarcity are fundamental issues of our generation,” says Palmiotto,. “At Tuck, we believe it is imperative for current and future business leaders to understand the implications of the decisions made today on business and society.”