David M. Rubenstein Advises MBAs to Follow their Passions and Lead by Example

The Carlyle Group co-founder was the first speaker in the new “View from the Top” speaker series at Tuck.

Rubenstein is a noted philanthropist whose activities have had a profound impact on many aspects of American life, from arts and culture to health care to education and beyond.

One might think that David M. Rubenstein, the co-founder of The Carlyle Group, would have had a relatively straightforward path to a successful career in finance.

In reality, he tried on different roles, with some a better fit than others. Before co-founding one of the world’s largest private investment firms, Rubenstein practiced law in New York and served as a domestic policy advisor to President Jimmy Carter after feeling inspired by John F. Kennedy’s famous “ask not what your country can do for you” inaugural address.

“If you don’t love something, you can’t be good at it,” Rubenstein told a packed room of students during a lively Q&A session with Dean Matthew J. Slaughter in Tuck’s McLaughlin Atrium on October 22.

Rubenstein was the inaugural speaker for the “View from the Top” speaker series, which brings accomplished and influential business leaders to campus once a quarter for an exchange of ideas with students. Speakers are chosen from different industries and exemplify Tuck’s mission to educate wise, decisive leaders who better the world through business.

During the session, Rubenstein shared inspirational and humorous stories from his personal experience, encouraging students to follow their passions and lead by example, no matter what life throws at them.

Rubenstein acknowledged that there were times in his career when things didn’t go as planned but said that it was still a character-building experience. When President Carter lost to Ronald Reagan in 1980, Rubenstein had been working on Carter’s general election campaign and suddenly found himself out of a job. And yet, this was the springboard that led to him founding The Carlyle Group.

“Take advantage of the position you find yourself in,” said Rubenstein, who was born in Baltimore to a postal worker father and a homemaker mother.

During the event, Rubenstein answered students’ questions on topics like the current state of U.S.-China relations and rising income inequality, which has hit a level that Rubenstein said “hasn’t been seen since the 1920s,” due to factors such as increasing high school dropout rates and high illiteracy rates.

There are not enough people giving right now and it’s really nice to see someone stepping up.

Rubenstein is also a noted philanthropist whose activities have had a profound impact on many aspects of American life, from arts and culture to health care to education and beyond. He was one of the 40 original signatories of the Giving Pledge, a campaign created in 2010 by Bill and Melinda Gates and Warren Buffett in which the world’s wealthiest individuals and families commit to dedicating the majority of their wealth to philanthropy.

Mickey Julian T’21 said he decided to attend Rubenstein’s speech because he was intrigued by Rubenstein’s career and inspired by this philanthropy.  “There are not enough people giving right now,” said Julian, who worked as a consultant for Bain in Boston before arriving at Tuck, “and it’s really nice to see someone stepping up.”

Rubenstein’s patriotic giving is rooted in his love of history. He has donated generously to the restoration of the Washington Monument, Monticello, Montpelier, Mount Vernon, and plenty more. Rubenstein also purchased a rare copy of the Magna Carta and provided it to the U.S. government on loan, rescuing it from the auction block in the hopes of spurring curiosity among Americans. He did the same for the Declaration of Independence, the U.S. Constitution, the Bill of Rights, the Emancipation Proclamation, and others.

“We don’t teach history and civics very much anymore, but if you have access to historical documents, people will show up to look at them—they’re more likely to read history and want to learn more,” said Rubenstein, whose book, The American Story: Conversations with Master Historians came out last week.

Giving back has been a way for Rubenstein to lead by example. It’s also provided deep meaning to his own life and even earned him accolades from his own family. “If your mother calls and says you’re doing a good job, then you are,” Rubenstein joked.

In 1987 at the age of 37, Rubenstein co-founded The Carlyle Group, which currently has $222 billion under management. Since 2016, he has hosted The David Rubenstein Show: Peer to Peer Conversations on Bloomberg TV and PBS.

Rubenstein earned his undergraduate degree from Duke University in 1970 and a law degree from the University of Chicago in 1973, where he served as editor of The Law Review. In 2018, he was awarded an honorary degree from Dartmouth College, and was the featured speaker at Tuck’s investiture ceremony that same year. 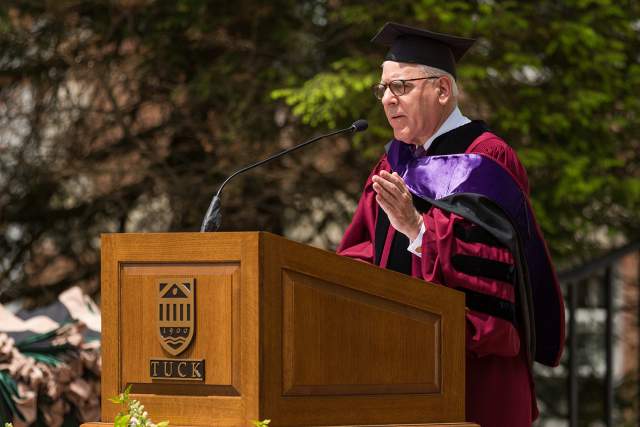 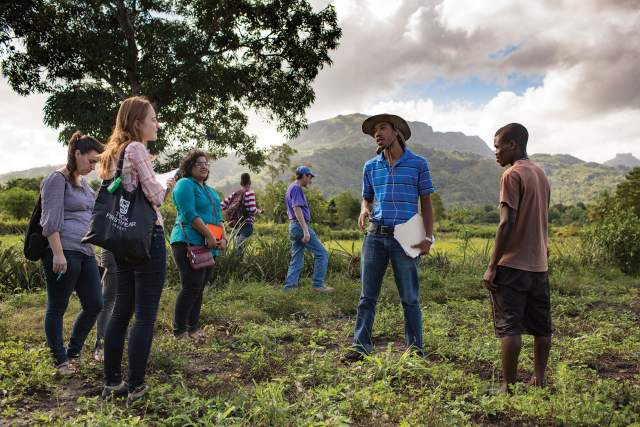 A $25-million donation from the American family foundation of Michaela and Zdenek Bakala T’89 will support TuckGO, the school’s global learning program.