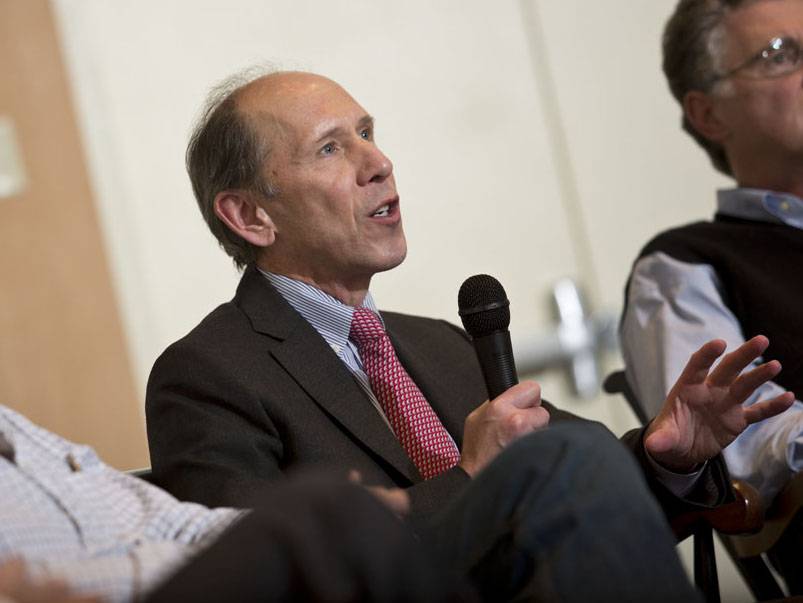 The Center for Global Business and Government sponsored a screening of “Money For Nothing” followed by a panel discussion with Tuck faculty.

Cook Auditorium was nearly full last week for a screening of “Money For Nothing,” a new documentary film that traces the history of the Federal Reserve System and questions its enlarged role today. The event was sponsored by the Center for Global Business and Government; Peter Fisher, a senior fellow at the center, was an executive vice president at the Federal Reserve Bank of New York and appears in the film. After the screening there was a panel discussion with Fisher, Tuck professors Matthew Slaughter and Ken French, and Jim Bruce, the writer, director, and producer of the film.

Bruce, who was the driving force behind the award-winning 2005 documentary, “Sierra Leone’s Refugee All Stars,” told the audience he wanted to make a movie about the Fed because “we need to think about its impact on our economy and country.” He’s been interested in financial markets for more than a decade and, according to the film’s website, raised a “significant portion” of the new film’s budget with short trades in 2007 and 2008. What worries him now, he said, is that the government is so overextended with debt that its ability to respond to fiscal and humanitarian crises is severely compromised. And, he joked, “there’s no way to short government failure.”

The film opens with the catalyst for the creation of the Fed: the Panic of 1907. The troubles began in October of that year, when two men tried to corner the copper market. Within days, people had withdrawn millions of dollars from banks, fearing their savings would be lost. New York City was nearly bankrupted. Without a central bank, securities firms and banks had nowhere to turn for short-term liquidity, and the ensuing panic set off a wave of bank runs. Fed up with these repeated panics, the country realized it needed a central bank to control the money supply. The Federal Reserve System was born six years later, in 1913, at the behest of President Woodrow Wilson, via the Federal Reserve Act. The Act gave the Fed three objectives for its monetary policy: maximum employment, stable prices, and moderate long term interest rates.

As “Money For Nothing” shows, the Fed had to learn how best to achieve these objectives. The film argues, for example, that the Great Depression was caused in large part by the Fed’s failure to properly manage interest rates. Then, once it knew what to do, there were times when political pressures prevented the Fed from acting. This was the case in the late 1960s, when the Great Society and the Vietnam War had drastically increased government spending and raised prices. The Fed should have raised interest rates, but President Lyndon Johnson prohibited it. The result was long-term inflation that reached record levels in the late 1970s.

The Fed’s role really began to change in the late-1980s, after Alan Greenspan was sworn in as chairman. At Greenspan’s command, the Fed provided immediate liquidity after the 1987 stock market crash. The strategy worked, but it began a precedent of the Fed intervening not just when problems arose in the economy, but when the markets became weakened. Greenspan continued that practice in the late 1990s when the Fed bailed out Long-Term Capital Management, a failed hedge fund. Now another precedent was set: the Fed would rescue investment banks if they got into trouble. Among insiders it was called the “Greenspan put”—a sort of safety net—and it paved the way for more borrowing, speculation and risk.

The Fed evolved again in response to the bursting of the dot-com bubble. To soften the blow from that event, Greenspan promised to keep interest rates low. Again, the strategy worked, preventing greater harm to the economy and spurring growth. But it sowed the seeds of the housing bubble, with lots of cheap money available for real estate development.

In the wake of the financial crisis of 2008, the Fed has maintained its forceful use of monetary policy to shore up markets and stimulate growth. The result is that the Fed interest rate is as low as it can get—zero—and there are no plans to raise it anytime soon. This is new territory for the U.S., and people are wondering how long the low rates can last before inflation sets in. Long-term growth of GDP is recognized as the only exit strategy, but accomplishing that growth requires government spending on physical capital, education and innovation, and the government’s budget deficit makes that spending difficult.

“The serious problem is easy to understand if you think in terms of real assets,” said Ken French, the Roth Family Distinguished Professor of Finance at Tuck, during the panel discussion. “We can’t continue to consume more than we produce.”

For Peter Fisher, a historical perspective is key to understanding the Fed and its proper role in aiding the U.S. economy. “We invented central banks to deal with the limited problem of bank runs,” he said. “But now we believe in the omnipotence of central banks. Since 1982, we’ve felt that we could always bring rates down and pump consumption. As we’ve seen, that only takes you so far.”